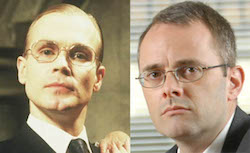 It is not the first time in Mark Wattsâ chequered career that he has been accused of being âMcCarthyiteâ or instigating a witch hunt. It makes it difficult to say anything original about him â especially when it was all said before by distinguished journalists of the old school.

Mr. Watts comes across as a petty and paranoid candidate suspecting conspiracies and Reds under the bed, wherever he âinvestigatesâ.

Wattsâ attack was poor journalism, childish, divisive, spiteful and fit only to run alongside Jan Moirâs anti-gay rant in the Mail.

That was 2009, when Watts was attempting to position himself as a suitable editor for The Journalist, the in house magazine for the already dying breed of men and women who knew a thing or two about objectivity, and could place a semi-colon without the aid of a sub-editor. The ensuing row moved Roy Greenslade to comment:

His investigations are a sham. Worse, his journalistic pomposity is an insult to our trade.

One of the few to come to the defence of Watts at the time was Fiona OâCleirigh, a journalist who had followed him to the Iranian backed Press TV, and was to continue on to Exaro. She also headed down the VIP child abuse rabbit hole ….

Failing to get that job, he returned to the organisation he set up in 2004 with Bill Goodwin, the FOIA, which offered to make the forerunner of Freedom of Information requests on your behalf for the bargain price of Â£84 a throw. Or to investigate your work colleagues or employees by âstrictly legal methodsâ. The website for the FOIA was last updated in 2011, though FOIA is still filing accounts. Accounts which show that while it may have Â£4,369 in the bank, it owed Â£5,498 to the brave souls who financed it before it withered and died as the public decided to make full use of the brilliantly democratic (and free) What Do They Know website, inspired by Chris Lightfoot.

Matthew Scott has already exhaustively covered Mark Wattsâ attempts to earn a living out of recycling financial news for Â£6,000 a pop with Exaro, and subsequent success in getting Jerome Booth to chuck Â£2,295,292 into his piggy bank â a loan which is due to be repaid with interest of Â£113,410 (and rising!) in a mere six months time…

Presumably some of that Â£2,295,292 was to pay for a decent web site for Exaro â say Â£5,292? Where the other Â£2,290,000 has gone will fascinate future historians, and probably Her Majestyâs Revenue and Customs, not to mention the payments from various media outlets including Australian TV stations who were the recipients of ârecycled newsâ â but this time on rumours of child abuse by VIP paedophiles.

I am mystified as to how a journalist held in such low esteem by his venerable colleagues, and known for six years or more to be a) desperate to generate an income and b) prey to paranoid thoughts of conspiracies wherever he looked, could have been allowed by the media and public alike, to be the âagentâ, for want of a better word, of a selection of exceptionally vulnerable people.

For days past he has been near hysterical, and displaying signs of incipient mental ill-health himself, as he claimed that other media outlets were not allowed to report anything concerning any of âhis victimsâ â unless it was to say that their fantastical tales were âcredible and trueâ. That comment he had no objection to, nor to lurid smears against any of the supposed gang of âVIPsâ â but let no journalist, even the venerable BBC, repeat for one moment even claims made by the victims themselves, that all was not well with the version Mark was selling and he appeared close to spontaneous combustion.

Markâs previous expertise at âinvestigating colleaguesâ touched their nadir when he triumphantly announced that the Panorama reporter might have a conflict of interest in the story since as a child he had lived in the same road as Sir Peter Morrison. What was he suggesting? That Morrison might have given him sweeties as a child to forever endear him to paedophiles?

Exaro has established that Daniel Foggo, the reporter who is due to present the Panorama, was a near neighbour to Morrison, the late Conservative MP, who was Lady Thatcherâs parliamentary private secretary (PPS) when she was prime minister.

That ârevelationâ unleashed a tsunami of hysterical laughter from watching fellow journalists:

Exaro getting desperate. Foggo lived on same road as Peter Morrison. What kind of mad conspiracy bullshit is this? http://t.co/6BEfXN1Qkv

In the event, the Panorama programme was barely worth watching â noÂ fireworks, calm measured reporting.

I came away with a new respect for Ian McFadyen, a man who was undoubtedly abused, and at Caldicott School, where young Meirion Jones spent his formative years and noticed nothing amiss. Ian eloquently put into words my own thoughts on these matters: that abuse victims arenât commodities to be traded within the media; nor stepping stones to a higher media profile for MPs, they are deeply vulnerable and troubled people, who deserve respect and privacy.

For as long as the media continue to peddle unproven accounts to boost their circulation, social media will continue to point out the flaws in those accounts. I certainly wasnât pointing out the flaws in âDuncroftâ accountsÂ in 2007, because then the allegations were being quietly and professionally examined by the police and the CPS who concluded that there was insufficient evidence to bring a prosecution, never mind get a conviction. The Police had interviewed all 90 girls who had passed through the school at the time (1978) those allegations were concerned with and none could corroborate the story. Not one of those girls ever mentioned Karin Ward. It was Meirion Jones with his paranoid conspiracy claims that the Police had failed to investigate âproperlyâ because Savile was âtoo old and illâ that first brought to light the new claims from someone of the 1973/4 intake who was making similar claims after consultation with others on the Friendsreunited site. Far from âfailing to investigate properlyâ, the Police had simply never heard of Karin Ward or her claims. They are not clairvoyant.

Publicise such claims as âBebe Robertsâ and people like me are liable to pipe up and say ânot trueâ â and I was there. Is that fair to people like Bebe? Known for ever more as a liar? Probably not; but if the media hadnât publicised her claims, they could have been quietly investigated by the police without the troubled Bebe being publicly shamed.

As the excellent Liz Gerard has said vis a vis the media:
But itâs âout thereâ; âyou canât put the genie back in the bottleâ; âeveryoneÂ else will have itâ.
Like everyone else in your teenagerâs class will be going to the party or getting that pair of designer trainers?
Time to grow up and take some responsibility. Newspapers are not obliged to replicate what is on the internet or to match it horror for horror.
Just because you can do something doesnât mean you should, and just because material is available doesnât mean you have to use it.

And, anyway, isnât âItâs been everywhere all dayâ the classic argument for downgrading a story rather than promoting it?

The Police would certainly be grateful if the media heeded her âold schoolâ advice.

People like Mark Watts, who see victims as a business model, are abusers in their own right. Panoramaâs programme wasnât a demolition of VIP abuse claims per se, it was actually giving some of Exaroâs victims a chance to speak out without their words being filtered by Exaro. At least two of the stories extensively flogged by Exaro for profit were undermined, not that the victims hadnât been abused, but that the story Exaro had sold was not what they had said. Nor had they claimed to have been abused by VIPs â those claims had been Exaggeroâd.

Both the anonymised âMarkâ and âDavidâ in the programme are deserving of all our sympathy; they are not evil âfalse allegatorsâ. They are troubled and confused adults who need professional care and support. They wonât find that at the hands of desperate journalists looking to make a buck or two.

Since the appalling âSavile exposeâ, there has been an ever lengthening queue of journalists who say âthey knew all alongâ (but couldnât say it before because they didnât have any evidence!). The despicable Jamie Pyatt has been squawking in the dock for the past week that Savile âcould have been stopped in 2009â if only he had been allowed to publish a libellous story.

So could Mark Watts have been stopped in 2009? The Journalistic fraternity knew what the man was like. How could they allow him to take such fragile lives in his hands? Why did it take the BBC, with all its own inherent problems, to speak out?