This is a public service announcement for the benefit of those of a certain age, like myself, who are watching the younger generation take over the helm of our crumbling world, and who wonder whether they really have the intellect or the mettle to get it back on track. They do, they just don’t speak the same language as you.

I offer you an exclusive insight into the minds of those unfathomable young people.

In far off Japan, a middle aged teacher adopts a stray dog. She put a picture of the dog on her web site – to join the pictures of all the other rescue animals she has that no one apart from her friends and family have ever taken a blind bit of notice of.

Kabosu, for that was the dog’s name, was looking sideways. This is important in the world of the young. Its a sign like, innit? Lol! Wow! Lulz!

They didn’t know the dog’s name, in fact they couldn’t even spell Dog, but they knew their social media. Soon millions (and I do mean millions!) of pictures of Kabosu were swamping the Internet, popping up in inboxes round the world. Kabosu, or ‘Doge’ as he was now known, was an Internet star. 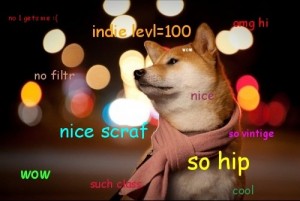 The young like to decorate their idols, so they sharpened their best Photoshop crayon, licked the end, and wrote meaningful things on the picture. No really. When you see them sitting in your lecture hall, looking intelligent and taking notes, this is what they are actually doing. This is how they impress each other.

A web site called ‘Welcome to Venice‘ – (No, of course it’s not a travelogue about the educational culture available in Venice, you old fashioned trollop, do try to keep up with modern life) published a picture of ‘Doge’ with a cup and saucer on his head. As you do. Nice scrat and all that to you too.

Wow! Lulz! The Internet went crazy. 33,000 hits in an hour. These young people are really on the button. (Worryingly, the owner of ‘Welcome to Venice’ appears to be some sort of air traffic controller. Not that I am suggesting for one moment that he might have been figuring out how to get Doge to look cute with a cup and saucer on his head during working hours. Just. Well, it’s as cheap to drive these days).

Then Doge popped up on Reddit (this is a site which tells the independently minded youngsters what is socially acceptable to read) with a hugely popular post titled “LMBO LOOK @ THIS FUKKIN DOGE.” How could you ignore that entreaty?

‘Doge’ was rivalling ‘Lolcatz’ as the means by which the next generation ‘express complex philosophical ideas’ according to expert linguist Annalee Newitz. You did know that the time honoured moral compass – the Bible – has been translated into ‘Lolcatz’ for the benefit of the sexting generation who can no longer read English? Oh dear, you really aren’t down wiv da yoof at all, are you?

A lot of journalists are struggling to keep up with Doge; no point in writing in English if your audience don’t understand it. Annalee’s tweet was retweeted and commented on 40,000 times eventually!

Similar to Bitcoin and its derivatives, Dogecoin can be mined and exchanged for goods and services among the participants. Following the launch of the official website, a slew of social media channels and referential webpages soon emerged for Dogecoin, including a Twitter account and a Facebook page, racking up more than 1,000 followers and 1,800 likes within the the first week, respectively….By December 14th, an

encyclopaedic article describing the concept of “Dogecoin” had been submitted by Wikipedia editor ‘CitationNeeded’. At its peak, the estimated value of DogeCoin skyrocketed to a high of $400.80 per coin.

Nor were the thieves far behind…..On Christmas Day several holders of Dogecoin reported that their funds were being transferred to an unknown account identified as “DQT9WcqmUyyccrxQvSrjcFCqRxt8eVBLx8.” Later that same day, the founders of the Dogecoin storage system Dogewallet, temporarily shut down the service and issued a statement confirming that a hacker had gained access to its file system and modified its pages to reroute the coin transfer to a static account. (That’s one of those old fashioned banks you remember from your youth where most of the staff speak English and deal in coins with the Queen’s head on….).

This is the world from which those who control our lives are drawn from now – so prepare yourself: when you are standing up to your waist in swamp water in your retirement bungalow in Floodlands, Somerset, and you want to ask the environment department what they are going to do about it, here’s your template.

Ta so! [Your name] Retired. (And please don’t forget to include a picture of a Japanese Shiba Inu dog wearing lipstick and wellie boots).

The bright young things in the Department of the Environment will understand.

What is this blog turning into? Yesterday, we had InterWoozies. Today, it’s the InterWoofies. I thought, as we, the more ancient and toofless might have said in our own yoof, it was supposed to be all about boning the real baddies

So updating you! Very trendsetting! Lol!

Lol, you should talk! Reading your posts last night was like The Works of James Joyce in 500 characters.

Oh, Anna, we did exactly the same, only it was called defacing posters/bills, and graffitti. And we weren’t half as nice, either. I found those little messages on the Doge Meme pic (“Such class”, “So cool” etc )rather touching. The vile addenda we used to contribute to public signage was a whole other medium of communication

As for the Dogecoin disaster – well, welcome to Capitalism 1.01, kids. Nothing like learning by doing….

And the spray can…..

No. it’s worse than that, Anna. I and my mates defaced the gallery of teachers’ photographs in the entrance to our school (it was meant to create a warm and welcoming atmosphere) with comments like “Anne o’Rexia” under a mugshot of particularly over-weight lady.

And yes, I am ashamed of this. I wish we’d put “Large and Lovely” are something like that instead, in the new Doge-spirit of harmless blather.

Do doges rofl?
Or roflmao ?

* standing up to your waist in swamp water in your retirement bungalow in Floodlands, Somerset *

The Doge of Venice might well have known the solution….
But he is down to third in my list of non-googlewhacks I noticed.

As opposed to classically-pissed, as quite a few posters were last night

Sorry but LOLCATS and other animal memes are soooo 1914. If you want to be in ‘wid da yoof’ then you should try snorting Mini Cheddars (apparently the EVIL DRUG that is turning our sons into criminals and forcing our daughters in to a life of degradation).

Thanks for another educational posting Anna.

The piccie shows yet another addition to the lexicon, pre-dating a presumed future entry in the OED.

‘Vintige’ produces 73,000 hits by Google; so is either a new word, or, the number of dyslexics describing moderately old things.

I name you as Janet Street-Porter and claim my five pounds.

“The future is a foreign country, they will do things differently there”, as L P Hartley might have put it.

JR – LP, LP – JR – easy mistake to make, but in other circumstances it can bugger up your turntable.

As a person who tries to follow the arcane rules of grammar, who applies full stops, commas, speech marks and all manner of punctuation even in the odd (rare) text message, I find myself utterly bewildered by the child like txt speech of modern idiom and am likewise confused and baffled by so much that is common to the ‘yoof’ of today…

When did I become a dinosaur?

The only time I seem to be able to understand the texts my kids have written is when they “NEeD ££ Dad PLZ”. Other times ancient Sumerian would be easier.

Oh, the joys of kids wheedling for cash! It needs little translation in whatever medium.

I haven’t read anything in a while that was both so hilarious and so depressing at the same time. Please bring out a book Anna – your writing is a little jewel in this cesspit of internet news!