No, Ms Raccoon has no intention of shutting up â though that would be an equally popular request these daysâ¦.

But several people have asked if I could creep into the man cave and take some pictures â this morning I was up before Mr G and managed to do just that.

Here, in all its glory, is the man cave â you can see why I wanted to turn it into a kitchen!

In fairness, he has now built me a magnificent kitchen. I am further instructed re: Mattâs comment, to make it quite clear that he wouldnât allow a Black and Decker tool anywhere near his establishment â they are all Makita.  Honour satisfied! 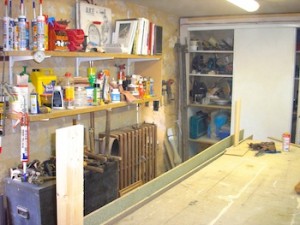 Iâd cut down on his pocket money, if I were you Anna.

Truly, Mr. G is a mighty Ozymandias, king of kings in the world of sheds,
workshops and tools. Mere mortals such as myself can only look on and
despair.

Itâs all a front. Heâs got booze or chocolate or floozies stashed down
there. A proper workshop wouldnât be that tidy â especially if I worked in it
. . .

Mr G might be too useful for his own good! My brother-in-law used to be
asked to fix things for family and friends as he had a workshop (though not
nearly as palatial as your groomâs). Using his superior intelligence he made
sure that the finished product was never quite satisfactory. People stopped
bothering him after that. I stand in admiration of his technique.

Many of the worldâs most difficult questions have been addressed and solved
by a man in a shed. Few that I can think of have been dealt with in a similar
fashion by a girl in a kitchen,. Itâs all a matter of prioritiesâ¦

For someone who keeps such a cave there can only be one book to buy him if
he hasnât already read it âZen and the Art of Motorcycle Maintenanceâ by
Persig âand Anna with your literary skills how about a book with Mr G as the
classical narrator?

Looking forward to seeing the kitchen.

Garn, itâs where you craft your blogs.

Nay child! I have but a small part of the kitchen tableâ¦my work isnât
rated âessentialââ¦.!

Sigh, I could happily curl up in the corner thereâ¦

Gildas did when we ran out of bedrooms one year!

â¦actually though Rico was never quite *that* OCD about his cartouches.

Wow Anna what a tidy organised workshop, so light and airy too. Kitchen
should be a dream.

Whereâs the glass panel that shows the mill stream. I really want to see
that.

Bottom left in picture three, and top right in picture six â M G keeps
two heavy metal plates over the glass for fear that he might crash through
one day or drop a heavy piece of wood on it!

Maybe next Saturday if he has another lie in I shall photograph the
kitchenâ¦..for an old goat shed it has scrubbed up magnificently!

I definitely need a better look at that Mill Stream.

My kitchen was once the goat shed, but I suspect that yours has
scrubbed up a bit better than mine, due to you having a man.

I shall do my best to comply Madame. Maybe next Saturday.

What a Treasury of Tools â would jump at signing up for two-week training
courses if he ever decided to impart classes! Exchange course for metal lathe
and god-knows-how-many additional bits for it Mr. G? And all so organized,
clean and tidyâ¦ Whenâre we going to see the kitchen?

Thanks for the pics â I am now even more envious than ever!