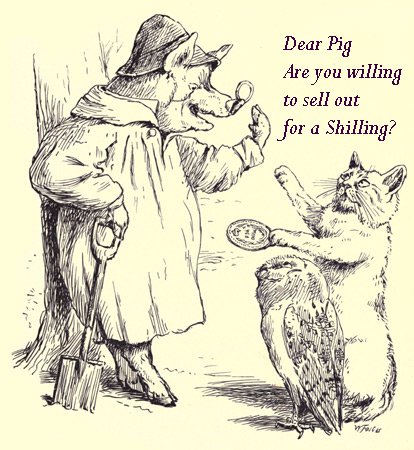 It was late morning in the Porcument, and Peter the Pig was in mid-nap, dreaming of better times.

Was it really only a few years ago the heroic Sir Stuart Bell had spent days and weeks touring the TV studios, explaining to the silly people why it was just not good enough that Pigs should only be in the best rewarded top 7% of the porcupation; and that in fact they needed far bigger troughs than supplied.

How, mused Peter, did Sir Stuart manage to pull off that trick of not only refusing to talk to his electorate for all those years, but also spent so much of his time in Gay Paree?

A porcine, so to speak, in a piscine.

Was it a different age, perhaps? Or not?

Then he sneezed so violently the door flew open, and he was fully half awake.

Peter spotted a cow standing at the doorway, wearing a pink rubber glove on its head.

“Gobble, Gobble, Moo, Moo, Moo”, said the cow. For it was in disguise, and the rubber glove was a consorting hat.

Coming completely to his expenses, Peter grunted a welcome: “Good morning, Mr Turkey, how can you help me today?”.

As an old military porker, he wondered if this was some sort of Assault Rifle.

He was good, and he had spent many years in the armed forces playing leapfrog.

But an arms dealer he was not.

The Cow stamped it’s foot, and interrupted: “I need an All Party Porcumentary Group. An APPG about Fudgy. I need to promote Fudge.”

Aha, he thought: That I can do.  And there’s plenty of fudge in here.

“Of course I have a fudget … er budget”.

In short order a group was set up to be a vehicle to promote fudge, 18 more Members of Porcument were signed up for the Good Ship Lollipop, and Peter’s private trough was just that little bit fuller.

The Turkey turned out to be a cow. The cow squealed, and Peter’s Porcumentary Perambulations were all published. The public caught the whiff. The press was on another pig-sticking frenzy. Peter’s pigsty was swilled out. And Peter found himself on the way to market.

A lot of these bastard cows had been sent to prison for various offences. Many members of the police force had gone the same way.

The Upper Piggery had a good population of animals. They could even be corrupt, get caught, and just settle back into the leather benches.

And here he was stuck downstairs having to worry about pettyfogging rules.

All he had wanted to do was to follow the example of Geoff the Giraffe, who stuck out his neck so far his head was chopped off, but was still coining it regardless, and Patricia the Porker.

All he had wanted was a modest pork barrel of his very own.

At least he still had his lifetime membership of the Westminster Pigsty Club, and the ability to talk forever to all the piggies who lived and worked there.

At least he had his piggy pension – the best in the country.

At least he had a few more years until he had to face the public again.

It was going downhill these days, but it was still worth it.

But how to deal with the real cause of the underlying problem, that the public thought that all the piggies were getting fat from their positions in Porcument?

I know, said Peter, looking at the pink rubber glove that was still on his desk.

I know, said Big Dave, who never needed a smoothie because he was the smoothie.

I know, said Little Ted, peering out from behind the perspex window in Len McCluskey’s wallet.

I know, said the Cow.

We know, said the Piggies in unison, with the brilliant insight that some people were not even involved this time.

And so they did.

And the Westminster Pigsty continued to be occupied by very profitable piggies for a very long time indeed.

Joe Public – how do you think fudge got its name? It’s merely a corruption
of the word “Fiji” – and corruption is something that the little piggies are
very good at.

Fiji is where fudge is mined.

I thought everyone knew that.

“I need an All Party Porcumentary Group. An APPG about Fudgy. I need to
promote Fudge.”

The best incentive to create an APPG, is to have one for an exotic,
far-away holiday destination that needs a ‘fact-finding’ visit by the entire
committee. Such as Fiji.