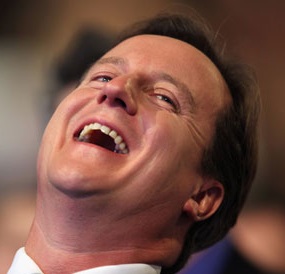 LETTER FROM THE PRIME MINISTER, THE RT.HON. DAVID CAMERON, TO THE NATION

As you all realise, my carefully selected metrosexual inner circle and I are absolutely right in everything we do and we feel intensely relaxed about our decision to roll out an ambitious, nationwide programme of name-calling and offence-giving.

As I have said before, âWe are all in this togetherâ. What this actually means is quite simple. On the one hand you unposh and poor people are âin thisâ, meaning in a big pile of doo doo and consequently have to suffer the pain of higher taxes, pay freezes, failing pensions, job losses, higher living costs, mass immigration and failing public services.

Meanwhile, we of the gilded classes in the Politics/Intergovernmental/Media/Public sectors (PIMPS) will continue to get pay increases, lavish expenses, generous pensions, job security and/or guarantee of reemployment. We of course are the âtogetherâ part of that phrase by which of course I mean that we are together in our enjoyment of these advantages that you idiot taxpayers provide for us.

But, of course, this is insufficient for our modern 21st century politics, so we have decided to add to your pain by insulting most of you, especially those who actually contribute to society.

Our nudge-units and policy wonks have used all of the expensive, specialised training that they received at public school and from their Politics, Philosophy and Economics degrees to construct and deliver an impressive series of insults to you all.

We are hurling verbal insults at you, insulting your sensibilities by imposing eye-wateringly mad policies and insulting your intelligence by everything we do and say.

This is the right thing to do and I am confident that you will remember this and thank us at the next election.

I have linked this to my FB page, because our politicians are EXACTLY the
same. Commyron/Merkel. Any difference?

Who put us in the doodoo in the first place? Three successive labout
governments? I canât go through that boring list again. Gold snatch. Rampant
lending. Pension snatching. An unelected, rather odd, prime minister. Who
thought he was the bees knees too. That other grinning mahogany coloured house
buyer as well. A warmonger and smiling deceiver. Elected no less than 3 times!
No wonder one could call sections of the eletorate silly names. Name calling
has morphed into bullying at school. So now a generation reared on classing
name calling as bullying, goes into freak out mode over 3 little alleged
words, that are so silly as to mean nothing. As I looked at Cameron, with his
smooth face, and bland manner, as party leader. I thought that there is
nothing there behind that shiny facade. Careful never to give anything away,
or maybe make a well considered decision. Prone to hectoring repost when
challenged. We all get the politicians we deserve. None of them are worth
voting for. I fear the rise of UKIP will only present an opportunity for name
calling rabble rousers, note the trouble in Scotland.

I really couldnât disagree with anything you wrote, Miss M. â and I donât
suppose I could have expressed it as well â so Iâll just add âHear, hearâ
and congratulate you on your perspicacity.

dont you think that cameron was right.
Look at the way the nation has
voted over the years.
And you think they are not mostly swivel eyed loons
./

David Cameron = AL PACINO = A Lying Poltroon And Conservative In Name Only.
(Feel free to change the âPââ I wanted to keep this a family blog.)

Who was it said âMany a true word is spoken in jest.â Possibly good old
Geoff Chaucer (1390) and he knew what he was on aboutâ¦ which is more than can
be said for Camerloon and his acolytes.

For the first time, I am beginning to think that a second term Conservative
or ConDem govenment is not the âgivenâ that it was at the last General
Election. Dangerous times Daveâ¦

Too close to the truth,painful reading.

Agreed.
Could we start a campaign, only using the acronym PIMPS to
refer to, er, PIMPS?
How long before we see it is used by a tabloid?

I think I am about ready to give up, ever since university days I have
loved politics but no more. Now we have a useless professional class of
politicians who are virtually interchangeable, whatâs the point in voting any
more?

After decades without a point, the impact of UKIP is now demonstrating
that there really is a point, providing you vote smartly. The three major
parties are all now urgently nipping their sphincter muscles as never
before, because they can all see the wheels coming off their cosy cartel of
continuity.

If this is maintained through the EU elections next year, the local
elections, all by-elections and into the general election of 2015, the whole
map of UK politics will be redrawn. I donât pretend to know what final image
it will portray but it canât possibly be worse than the one which went
before.

So get out there and vote UKIP every time â as Kitchener might have said
from a poster, âYour Country Needs You Toâ.

Well, theyâre getting my vote for the Euroâs next year. What
japesâ¦â¦â¦â¦..

Youâd have thought after Ken Clarkeâs gifting of millions of voters to
UKIP, the Cons would have realised ad hominems are simply counter-productive.
A lesson yet to be learnt?

BTW â once again Ms Raccoon enters Education Mode â I was aware of NIMBY,
but BANANA & NUMBPYD are new to me. I can understand uses for the fruit,
but the final one will only apply to Coronation-Street type scenarios,
surely?

Somebody should check the self-destruct mechanism in 10 Downing Street. Iâm
sure somebody has accidentally nudged it. They make it easier for UKIP with
each passing weekâ¦

All the more reason to take care who you vote forâ¦..

For the optimists amongst us, hereâs a potential antidote:-