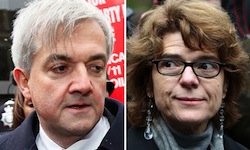 When you’re caught in speeding car
Makes no difference who you are
If she takes your points, she gains
A hold on you.

Later when you dash her dreams
You’ll regret your foolish schemes
When you cheat you’ll come unstuck
As schemers do.

Fate’s unkind
She brings to those who cheat
The just fulfillment of their secret wronging.

Like a bolt out of the blue
Fate steps in and runs you through
When you wish your points on her
The joke’s on you.

“”Before you embark on a journey of revenge, dig two graves”

Huhnatic – The Green Windbag by Frankie

Chris Huhne was a Liberal dope
Green Power… Big Windmills… No
hope!
As his wife’s legal tricks
He was unable to fix
Huhne’s been
forced to buy soap on a rope!

Chris Huhne’s sat in prison in tears
Fought off some ‘attacks of the
rears’
His ex wife’s a jailbird
His ex girl (now we’ve heard)
Won’t
be lonely for long – bye bye dears!

I would have sent him down for years, not for lying – he’s a politician
after all and that’s what they do – but for the damage wrought to the
countryside (and our wallets) by all those ridiculous bird slicers. What a
Hoon!

Behind every lying politician there’s a bad woman…………

And occasionally, …….. more than one.

Naaah! Only one of they is a (full-time) woman.

Fate. It is an interesting philosphical conundrum. In his “Warrior” series
whuch feature the character Uhtred of Brunanburgh, auther Bernard Cornwell
often invokes what i undesrtand to be the Norse motif of the “Old Sisters” (or
“Norns”) who weave the skein of our lives, cackling away as what seems to be
progress towards a happy ending is cruelly and ironically derailed by
inexorability of Fate. I have often thought there might be some element of
truth in that. Do we have free will? Or are we all pieces on a chess board,
being moved inexorably by some Divine and possibly mischevious God or Gods? Or
could both be true at the same time?
I shall have a coffee and a bourbon
biscuit, and think further on this.

I did hear that after being sentenced, he turned to Vicky and asked her to
do his time for him…

As they used to say, life becomes a complete a bitch when you discover
you’re married to one………………..

best way to get rid of a possible leader for the liberal’s to rally behind
and to terrify the motorist to keep on shelling out….

never mind speeding here is what you do lawfully
https://www.lifeinthemix.info/2012/06/demolish-speeding-fines-issuance-penalty-points/

Oh, very good. Have some pork scratchings on me.

A long wooden nose to compliment the lyrics, please.