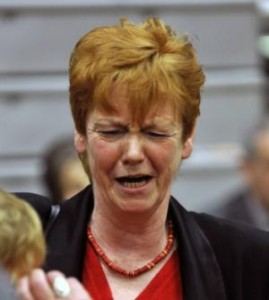 A rare moment of truth for Vera….

Apologies, but it’s Our Vera yet again.

It used to be that Council chiefs sat round a table with the police authority and decided together how much local residents could afford to pay for their Police service.

Vera has changed the rules. She announced via the local newspaper that she intended to force through a 3.5% increase on the council tax to pay for her plans to ‘improve’ police services.  Around £3 per household.

Outraged councillors, including some Labour colleagues, are furious – they are trimming services left, right and centre to avoid increasing local taxes for hard pressed residents – and Vera has already taken over £10 million from the £45 million in the Police Reserve Fund.

This is what you get when you politicise the Police.

Can anybody point me to figures showing the Reserve Police Fund, county by county? Can any informed coppers tell me what the Reserve Fund is supposed to be used for and who should have control of it?

Could we not find a latter-day Henry II to ask “Will no-one rid me of this
turbulent trout?”

I think this is Vera trying to increase the precept… Not to say that the
police are worth every penny!

Seems she is not the only one pulling this trick.
http://www.dailymail.co.uk/news/article-2272358/Council-tax-rise-blamed-Jimmy-Savile-sex-probe-police-demand-resources-deal-abuse-investigations.html
Step
forward one Mr Stephen Bett of norfolk

Let’s hope that if we have to pay more for the investigation of historic
sex abuse cases, they do actually INVESTIGATE them. Instead of just
collating them all like the police did with Savile.
The gates of hell
have opened I tell you, every crazy person with an unlikely story has seen
the chance to tell it and have it taken seriously. It matters not if it
involves satanic hooded figures chanting ‘Jim’ll Fix It’ or tales of Ted
Heath slitting boys’ throats and slinging them off his yacht – they have all
got be looked at, with (it seems to me) a presumption the truth is being
told. God help us.

It was David Icke that came up with the meme for Ted Heath “slitting
boys throats and throwing them over the side”.

Although I’m not a fan of The Death, I’m even less fond of David Icke’s
alternate view of reality (lizards an all).

Icke was of course, spokesperson for the Green party at one time –
possibly where he acquired his alternate view of reality.

Plenty of opportunity for acquiring alternative views of reality as
Hereford United goalkeeper or Midlands Today sports reporter as
well.

* possibly where he acquired his alternate view of reality *

More likely at the BBC:
“in 1981 moved on to become a sports
presenter for the BBC’s national programme, Newsnight.”
http://www.wikileaks.alt.tv/

Those numbers are fishy, Anna.

Council Tax at just under a hundred quid??

I think anna means that Vera wants to increase the Police precept of
Council Tax by 3,5%. that would indeed amount to £3 per household A
referendum will be needed. cf Cleveland Police 1.99% proposal http://www.gazettelive.co.uk/news/teesside-news/2013/02/02/proposal-to-increase-police-element-of-council-tax-bills-84229-32732183/

Ah, thanks for the explanation, Brian.

Anna, the following is an example of Northamptonshire County Council
Reserves Policy for 2012/13. The County Council hold the purse-strings for
Policing and the PCC now has access to it – thats how Vera gets to it, like it
or not!! Accessed via the NCC website!

“The recommended level of reserves is assessed with reference to the
Council’s Reserves Policy, which was reviewed by Cabinet in February 2012. The
minimum level of general reserves which it was considered prudent to hold at
the start of the 2012-13 financial year is £12m and was based on review of the
risks and associated values of a number of different elements.
The overall
level of reserves has to be specifically addressed as part of the Chief
Financial Officer’s Section 25 report which is issued alongside the final
budget report. This report is a statutory requirement and established that the
budget is robust, and that the levels of reserves are adequate.
There are
two main types of reserves. General reserves are held as a contingency against
unspecified future need, and earmarked reserves which are amounts held for
specific items. The reserve balances currently forecast for the end of the
2011-12 financial year are shown below.
Description
Forecast
Balance
31/03/13
£000
General Reserves
12,082″