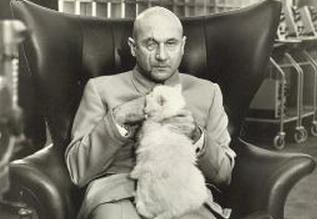 That means itâs time to take the Nick Griffin skeleton out of the cupboard for a day.

Here he is, channelling Blofeld, reading the Christmas Story.

It doesnât quite work, somehow.

Assuming that âFrankieâ is male (and if heâs a she, then I forgive Muslim
extremists for many of their less vile crimes) then, should I be obliged to
choose, Iâd prefer to take my long-term chance of survival with Mr Griffin
(proven lawyer, husband, father, tax-payer, MEP and more importantly, a
constant thorn in many a wretched British governmentsâ side). Apart from
anything else, I doubt heâd be happy punching another human repeatedly in the
face. On the other hand, A @ T Airmanâs attitude toward a tired old fairy
story seems sober enough. I was going to write English enough â however the
impulse was tempered by the thought of civilised people like Frankie (the
fist) tracking me down.

Always ready to agree that Griffin is a twat but tired (exhausted, more
like) references to âracismâ are an unwarranted descent into clichÃ©, adding to
the tedium of entertaining relatives over Christmas. Iâd rather like the BNP
to win a seat or two, just for the joy of witnessing the outrage on the BBC
website â not to mention The Guardian. Seems a degree of outrage might be felt
by one or two contributors here, sensitive souls with no sense of humour.

Taken on its own that is pretty much the Christmas story. Nothing wrong
with it and an improvement on many I heard from elevated pulpits this year,
such as Jesus came to be an example and show us all how to live, etc.
The
cat looks like a tabby.

I meant the original catâ¦

Such a hard decision! The catâs white. Butâ¦itâs Persian!!! What to do?

Yes, Nick. The actions of the BNP are mirrored in Christianity as a
dedicated fraternity whose strength lies in the absolute integrity of its
members.

And so it was that Griffin gathered the racist amongst us as the Masons
collect the war damaged to their cause, not unlike Fairfax gathered the war
broken soldiers from the Dutch war in readiness for the New Model Army on
these shores from within the secret societies to face the status quo in
Blighty.

Griffin may well upset the sane amongst us, yet as the cuts bite, as the
energy costs rise, their are less and less sane people to call your
own.
Anger is the aim, race hate is the game as the Masons set up the
Muslim communities through the immigrant Afghan mercenaries now in full
control of drugs in the North sold by the Muslims.

So we await the new-new model army of damaged vets from the Yugoslavian
conflict through Afghanistan and Iraq, to form the militia to combat the
perceived threat, but then it will be all change as everyone is an enemy of
the state, a trick the same secret societies set fourth in Germany back in the
day.

O what a loverly state of mind we have, presented each day by the
Coronation-Enders-Xfactor surreal scripts of misery and celebrity delight, yet
for the people it is a lesser pain than their own and so the script of the TV
becomes their life, sod the real world they have all left for the soap opera
heaven in pyjamas and slipper and a little bit of grape.

What hope for the new yearâ¦? Nick Griffin and his band of football
hooligans now kept off the terraces because the tickets cost too much.

Given the ongoing festivities my patience is slightly less elastic than
usual but even allowing for that, Iâm left mouthing âWTF does THIS mean?â to
the computerâ¦ Has it been hastily and loosely translated from another
language?