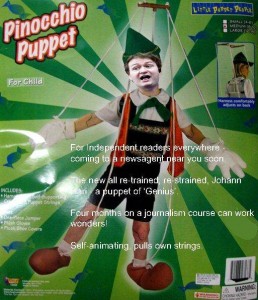 A little light hearted quiz for you on this frosty morn.

If you were in the business of churning out dubious statements, relying on innuendo, gossip and unsubstantiated claims, meddling with statistics – what is the one award, the one badge of respectability, that you would crave above all other?

Come along, you are being very slow this morning, you have been around the Internet long enough to know the answer to this one…

It should have come as no surprise to me that – guess who?

sorry, The Bureau of Investigative Journalism, has been making repeated spirited attempts to persuade the Charity Commissioners to give them charitable status.

Not once, not twice, but thrice they tried! The latest attempt involved the leading firm of ‘charity specialist’ solicitors – Bates, Wells and Braithwaite writing a report for them arguing their case. I bet that made a hole in the £2 million donation the BIJ received from Labour donor David Potter.

It should have been released to a fanfare of self-congratulatory back slapping next Wednesday. The web site for this ‘good news’ was set up; the canapés ordered, the invitations sent out. Signed by Iain Overton… editor of the Bureau until his resignation in the wake of the Newsnight disaster.

On Friday night, Maeve McClenaghan of the Bureau sent out a low key e-mail to the invitees saying that ‘it had been postponed’, with no further explanation…

Shame really, I quite like the idea of a fake charity for broken down old hacks….I can just see the endless afternoon TV advertisements.

‘Johann’s lies had grown long and convoluted, he was barely able to work when he came to us, but the Bureau of Investigative Journalism has restored him to health’ – cut to scene of Johann gambolling happily round a pasture of buttercups and daisies…..’Just three pounds a week can help other Johann’s’.

Or ‘Iain was covered in festering tweets when we discovered him cowering in a dingy garret, he was close to death by libel tort until the Bureau stepped in. £185,000 can save other journalists from a similar fate’ – give generously! Cut to shot of Iain munching happily on a bag of carrots, not a stick in sight.

A special prize on offer this week, haven’t decided what it is yet, for the most inventive ‘story board’ for a TV advertisement for donations to the Bureau of Investigative Journalism, should they ever get their charitable status…

Ms Raccoon needs to take a break from writing for a day or so, before her fingers drop off – so step forward bloglands most talented commentators, and make this a comment thread to remember (and preferable not because Ms Raccoon got sued for it!!!)

Check out there repayment schedule. Like all debt instruments, a loan
entails the rearrangement of
pecuniary possessions over time, between the
lender and the borrower.
In this time the borrower can apply for loans.

There’s a Jimmy Saville fancy dress costume up for grabs on ebay, if
anybody is interested. Current bid £25.00.

How’s about that then?

Interesting that it’s now being claimed ‘CHILD ABUSE INVESTIGATOR ANDREA
DAVISON WAS AT DUNCROFT APPROVED SCHOOL’. I wonder if any other alumni can
remember her? Is Duncroft a bandwaggon that just keeps rolling?

… The tentacles wrapped around the world just now……

The infamous barrister Felicity Gerry who prosecuted the Heroine
twittered about women in British Prisons committing suicide in cells with
blood stained walls. Not content with destroying her childhood incarserating
her in a paedophile ridden Approved School the they set about to destroy her
chance of a peaceful old age.
http://google-law.blogspot.co.uk/2012/11/child-abuse-investigator-andrea-davison.html

Gawd that’s funny! I love the way that anyone who does not agree that
Duncroft was Hell will find themselves labelled as not pretty enough to be
abused. This stuff is appalling but it’s amusing too, in a sort of bleak
way.

Would you like to accuse anyone whom you don’t like of having a drug habit,
or maybe you’d like to accuse them of enjoying a bit of light S&M action,
but don’t know where to start ?

As a long-established team of creative investigative journalists, a branch
of the topical Bureau of Investigative Journalism, we like nothing more than
building up a dreadfully dodgy dossier on such tabloid-screeching peccadillos
which we can then fool some naive dupe to broadcast without elementary checks.
We’ll name names, usually at random, we’ll even create evidence if necessary
(although we usually find that a futile chore) and we’ll do it all under the
aegis of an independent charitable body, just so we can cream off all the tax
and VAT benefits.

You’ll have heard our brand-name, but probably thought it wasn’t for you –
well think again. Don’t waste your time with the Woodwards and Bernsteins –
all they can ever do is uncover hidden facts and expose real wrongdoing. Let’s
face it, the last thing you want is for anyone to say of you “He should have
gone to Smacksavers”.

‘Smacksavers’ – when good journalism just isn’t going to hack it, we’re on
your side.

At InvestigativeJournos4U we pride ourselves on offering a service that is
friendly as well as professional. So whatever injury you have suffered, we are
always happy to discuss it with you, and advise you openly and honestly about
the chances of making a successful claim for compensation.

A lot of firms state..No Facts/No Fee, not us though. We won’t let a lack
of facts get in the way of a good story.

So, been a victim in the last 4 Decades? Don’t hesitate to jump on the
Bandwagon before it’s too late!

Over 95% of all UK mis-sold Personal Paedophile Insurance remains
unclaimed according to the Financial Services Authority (FSA). This equates
to around £3.5bn that UK citizens are entitled to regarding their mis-sold
compensation claims.
That means that there are millions of people in the
UK who are still due to receive compensation, With the wide media exposure
of PPI claims over the past couple of years, most UK citizens are aware of
the scandal. However, new figures reveal that many people may not be aware
that they are personally entitled to compensation for their mis-sold
PPI..
P P I was included in many loan agreements without prior consent of
the customer or notification. This has led to millions of people still being
unaware that they are entitled to compensation.

Brave points, Ms. Racoon. Would be nice if you wouldn’t be sued though.

Well, we’ll look forward to that. But surely, this rash of aggressively
lefty organizations (eco-Nazis, etc.,) is directly connected to the apparent
collapse of the Soviet Union; fail by that route, let’s try another one.

I hesitate to nominate (does that scan?) the entire staff at the BOIJ for
the Walter Duranty Prize, as I suspect that the queue (led by certain persons
at the BBC) is already three times around the block with more ready to join
the line

What happened to the canapes? Is it too late to put my hand up?

As long as they don’t contain anchovies. Can’t stand anchovies.

When it’s a lobbying organisation! Ta-daa!

A first-class satirical piece; but I do wonder if exposing the BIJ for what
it appears to be will affect the integrity of the Leveson Inquiry?

Or “The Orwell Prize”!

I can see it extending into an ‘adopt-a-hack’ scheme, where you pay a
monthly sum and, in return, you get an envelope full of cuttings of scurrilous
and intrusive stories which your pet journalist has published under your name
to avoid prosecution.

They could call it the Libel Lottery.

(music; something Barber’s Adagio-ish but cheaper)(A scruffy hack
sits at a desk in a dingy office, typing.)

V/O
This is Ewan.

Ewan is an investigative journalist. When bad things happen, his job is
to help people express their innermost secrets to the world and achieve
closure though allowing people like you to feel their shared pain.

It;s not an easy job, and that’s why he needs your help. Just £150 will
buy him the technology to record a conversation from 200 yards away or to
hack into a wifi-enabled computer or smartphone.

Remember, sometimes the truth can be difficult to find, but dedicated
investigative journalists like Ewan already have plenty of leads. If you
give generously, nothing will be kept secret any more….
(C/U
Journalist looks directly at camera
)
…. unless you ask us
to.

So give what you can to our appeal to Make Privacy History. Can you
really afford not to?

“not for profit” …. paying your executives lots of
money.
and
“charity” ….. giving your money away to people who have
none.

Give it a name.

They would surely need a home for broken-down journalists, perhaps it could
be named “Dunlying”.