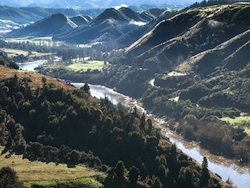 Concluding one of the longest-running court cases of New Zealand’s rather unique legal history — its legal system itself is a mixture of English common law and Māori tribal law –, the dispute around the status of the Whanganui River, on New Zealand’s North Island, has taken a turn that might strike some as rather unexpected. The river, which has been one of the most hotly contested areas before the Waitangi Tribunal, New Zealand’s permanent commission tasked with settling Māori land claims, will soon rank on par with companies and natural persons in legal standing. Acknowledging the inseparability of people and land, the Whanganui iwi’s often-repeated phrase is *ko au te awa, ko te awa ko au* — “I am the river, and the river is me”. It is this connection that has led to a [preliminary agreement between the Crown and the Whanganui iwi], bestowing rights on the Whanganui river. It is envisaged that the river’s rights will be actionable by the Whanganui iwi, much in the same way that a company’s directors can sue on the company’s behalf, as New Zealand’s Minister for Waitangi Treaty Negotiations said.

That, of course, is highly misleading — when directors or shareholders of a corporations sue, they do so in the right of the corporation, not as representatives but as parts of the corporation. A corporation *has* personhood, because it consists of persons — a river is *attributed* personhood, because of political fiat and an (admittedly laudable) recognition of certain peculiarities of Māori law and its close connection to the natural world. There is, really, nothing alike between the Whanganui river’s ‘rights’ and a corporation’s save for a fashionable confusion in the minds of commentators. I shall not belabour the point of corporate personhood further: it stands on solid foundations and needs no defence beyond [what has already been proffered by my betters]. On the other hand, our society’s obsession with the idea of rights merits concern.

The notion of human rights, once an aspirational concept of an ideal where basic rights of every man and woman were respected, has been cheapened into a universal debate-ender. Ours is the age following what Francis Fukuyama called the ‘end of history’: following the defeat of the Soviet Union, liberal democracies, with human rights as their cornerstone, have emerged as the unquestioned and unquestionable model of societal governance (at least as far as the West itself is concerned — the most ardent proponents of liberal democracy are fairly happy to justify billions languishing under extremist regimes of all creeds and colours as long as they can blame it on the colonialist West or justify it by reference to some cultural uniqueness). To question the existence, or protection-worthiness, of human rights is anathema — and perhaps rightly so. Yet the precise ambit of human rights keeps ever expanding. Proponents of any particular political claim will, eventually, resort to rights language to frame their claim: access to publicly funded abortion services becomes an issue of ‘reproductive rights’, gay marriage is about ‘gay rights’ and the ‘rights of the disabled’ are no longer about step-free access — they now include, apparently, a right to benefits.

Rights language is turning our discourse into a monolithic mess, in which ‘things that should be’ are all commingled into the category of ‘rights’, ultimately resulting in a heterogenous mess that will see the right to education next to the right not to be tortured and the right to marry next to freedom of expression. The result is a gradual cheapening of rightly sacred concepts of fundamental human rights. The great achievement of victory over fascism in World War II was the recognition that no society that does not respect the individual’s rights can be a fair and just society. With the defeat of communism in the Cold War, humanity came for the first time close to fulfilment of the dream of universal human rights. For the first time, billions shared a baseline level of rights, and the dream of world-wide equality in human rights.

Then reality happened. While New Zealand is busy giving rights to rivers, China [executes prisoners for the proceeds of a lucrative trade in their organs]. While the Waitangi River will now have legal standing, [Cuba imprisons without trial those who do not share the state faith of communism]. And amidst a staggering awareness of their rights, studies cited by Mary Ann Glendon in her book *Rights Talk* show an equally staggering deficit in understanding their corresponding duties. Rights in contemporary society come unearned, with rights language focused on the right-bearer and nigh-completely ignoring what Glendon called the dimension of responsibility.

The ‘rights’ of the Whanganui are the apotheosis of this idea. With the meandering waters of the river attaining rights that could be sued upon by the Whanganui iwi, the movement to divorce rights from duties and obligations has reached its apogee. No longer are rights given to people who are uneducated in their duties and unwilling to fulfill them, but to inanimate objects, too, that are entirely incapable of doing so. The dangerous message of the Whanganui’s fictional personhood is not that rivers can have standing in court — that’s common environmental lunacy that no-one in their right mind should pay particular heed to. The truly dangerous message is that things incapable of living up to duties can nonetheless have rights. It ushers in an era where rights come without even the possibility or mention of responsibility. Presumably, when the Whanganui floods and causes damage, the Whanganui iwi will not be called to account for the damage, nor can we expect a Māori version of [Xerxes’ lashing of the Hellespont]. Finally, the project has reached its stated aim: rights without responsibilities, claims without duties, demands without contributions.

And unaware of all this, the Whanganui’s white-water flows, washing away all sanity in political discourse and all meaning in the concept of rights.

While i agree that the ever expanding list of “human rights” is cheapening
the whole idea and in fact seems to be a wish list of things that people want,
but want someone else to pay for.

People can have rights without responsibilities – in the case of a child
for instance.

I like the idea of the river having personhood, and therefore being
responsible for flooding people’s houses

I have always used Cutlery and Crockery in rotation in case any of them
felt neglected and unloved. But I suspect that this says more about me than it
does about the Cutlery and the Crockery, especially as none of them have ever
complained.

It all seems “Cnutty”!
(As King Cnut demonstrated on the beach to his
fawning courtiers – he did NOT have dominion (or rights, or Rights) over the
sea).
If inanimate objects can have Rights, what’s next?

“It is envisaged that the river’s rights will be actionable by the
Whanganui iwi, much in the same way that a company’s directors can sue on the
company’s behalf”

I would hazard that the first claim made in a suit by the Whanganui iwi,
against a ‘real’ person who takes a bucket of water from the river, should see
suits against the Whanganui iwi as representatives of the river for floods
that impact on other person’s properties.