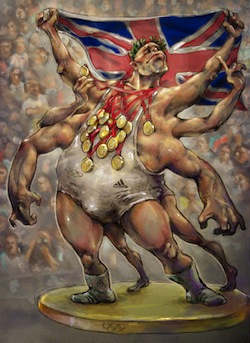 Not sure about the Latin grammar, but there you go. I have scribed some mumbling carping about LOCOG and the “Olympic Family” and the general bloated and often corrupt corporate culture that goes with it before, and I remain of that view. On the other hand, I have no problem with athletic excellence and courage and pure souls competing. Of course I have been in large measure seduced by the Games. That was inevitable, and quite proper.

On the whole, I feel Britain has done a very creditable job in hosting the Games. We do have a skill in providing organization and a bit of spectacle. And there have been some moments of competition which did by varying degrees raise the hair on the back of my neck or even force a tear. They are not necessarily the moments of greatest success and glory. Bolt in the 100 and 200 meters finals for example was extraordinary but did not move me as such.

This is my list of personal “wow” moments when I felt that chill of awe and excitement, and which will stay with me for a long time. And some boo moments to go with them.

And that really was that. It’s party time now for the athletes, and they can get to work using up the 100,000 condoms which LOCOG have thoughtfully supplied. As is well known the Olympic Games always degenerates into a gigantic and seedy shag fest. So, we can all put away our “feel good factor” for a while. Back to work, oh units of economic production! The Games are over. Now, satisfied, we must pay our Lords and Masters their taxes! You didn’t expect the cynicism button to be turned off completely, did you?

There’s something wrong about two girls bashing seven bells out of each
others. Nothing to do with whether they’re decorative or not, it just feels
wrong.

Why so hard on Andy Murray? He finally managed to beat the supercilious RF
machine, good for him.

And why no mention of Laura Trott? I must be one of millions of guys who
were disappointed to discover that she already has a boyfriend…

Enjoyed every minute of it btw!

And yes, the defining moment for me (apart from Her Maj skydiving into the
Stadium with 007, of course) was the women’s rowing, and that ‘Oh, where’s
everyone else..? We’re in front? WE’VE WON!!!’

Free to do what you want of course, but women’s boxing? Ugh.

Agreed. A most unfeminine pastime and a perfectly un-necessary event that
panders to the lowbrows.

The IOC missed an opportunity when they came under pressure to ‘correct’
the fact that boxing was the only olympic sport in which women were not
allowed to compete.

Rather than jerking the knee to the feminists, they should have seized
the chance and removed all boxing from the Olympics on the grounds that a
contest based on two people trying to bludgeon each other senseless can no
longer be considered acceptable. If the ‘legacy’ from 2012 is that millions
of kids, now including girls, start thinking it’s OK to beat the living shit
out of each other, that’s hardly something of which one could ever be
proud.

That is not to decry any ‘athletic skills’ of current boxers but rather
to suggest that their efforts would be better applied to activities which
did not feature raw and inhuman brutality as their key attribute.

Trying to formulate the rules of Lesbian tennis here *Boggle*

Yes. Because women are purely decorative, aren’t they?

Not at all, but funded sports suggest an audience. Thus make the
product attractive. Sharapova or Navratilova? I know which was more
successful and which I’d rather watch.

The most skilful, athletic, determined and graceful, I’m
guessing.

I’m waiting for true equality – Let men do Synchronised Swimming &
‘Rhythmic Gymnastics’ if they want to.

I was at a little launch party recently where a young girl, having rowed
with her mum, was sat on a chair performing a monumental sulk.

The best thing about these Olympics is seeing those proclaiming “it’ll be a
disaster”, “everything will go wrong”, “we won’t win anything” and “all a
waste of money” look more and lore like that girl. in the midst of a national
fun fest they stand there, arms folded, faces like thunder mutting about any
little scrap of problem, every last vetige of grump mined to maintain their
vast po-faced performance.

I’ve loved much of the event (although I really don’t get the hype over one
lad in the diving) – watching Dibaba run away from the best ever women’s 10K
field, yelling my head off at Mo Farah – twice – as he ran the last lap of a
distance race faster than you and I could ever have managed from a fresh
start.

But watching two Bradford Grammar School boys get gold and bronze in the
triathlon – lads my son studied with – that was special.

Rūta Meilutytė blubbing through her own gold medal ceremony. I hope she
wins many more

And I agree that the expression on Katherine Copeland’s face was priceless.
Katie Taylor’s too, though I was struck by the flash of friendship and
congratulation on the face of Sofya Ochigava as well. I liked seeing Zara
Phillips getting a medeal from her mother, too

you’ve forgotten all about the Paralympics which starts at the end of the
month!! (but demoted to Channel4)

so has the BBC it seems as they have promoted vigorously the ‘memorabilia
website’ that is selling off olympic treasures …………..

I agree that even the staunchest Olympic deniers must have found some good
in there somewhere; my favourite spectacle was Denise Lewis jumping up and
down in her decidedly unsuitable wedge sandals – closely followed by Colin
Jackson’s excited shout of “Here comes what’s-his-name!” during the
100m – and John Inverdale’s dry remark afterwards; “That’s why we don’t
have you commentating on the race”.

I’m not sure I agree about the dressage, mesmerising though it is; if you
want to see such things, you can watch them at horsey events around the
country – or, if you’re really keen, the Spanish Riding School in Vienna, but
I don’t think dressage – or any other equestrian sport – belongs in the
‘faster, higher, stronger’ Olympics. Eventers and top dressage horses are a
bit like supercars – and cost about the same; the rider gets the credit, but
the horse is the key.

(And at the other end of the spectrum, I can’t see the point of Olympic BMX
either; it’s something kids do in urban parks.)

That Valegro, I hear he’s going solo. His manager says the girl is
holding him back.

Funniest moment – not actually heard during the Olympic coverage, but
whilst listening to Jonathan Agnew relating his Archery commentary experiences
at Lord’s on TMS. His tone of voice when describing entering the Long Room in
the famous old pavilion and finding, of all things, a Coke vending machine was
absolutely priceless. It conjoured a vision of Bateman cartoon, with the
portraits of Sir Len Hutton, Sir Don Bradman and all staring down with
eye-popping shock, horror and contempt at this uncouth interloper.

A Coke vending machine? In the Long Room? Civilisation has ended…

Re: The Sheffield postbox of Jessica Ennis. Hardly defaced: the graffiti
read “Go Jess”. I’d call that unbridled (if somewhat poorly placed)
enthusiasm. The Royal Mail over-reacted by calling it vandalism/defacement –
or have we reached the stage where only the state can celebrate its
individuals achievements and the state dictates how? All it need to do was
paint the thing out.

Post box vandalism? Just to keep a sense of balance –
\\A man has been
arrested after painting a Hampshire Royal Mail post box gold in honour of
Olympic sailor Ben Ainslie. Rob Smith, 51, said he painted the post box in
Lymington, where the gold medallist lives, in the early hours.\\
http://www.bbc.co.uk/news/uk-england-hampshire-19227277

Agreed. Pathetic over-reaction. Looks like he used bronze paint instead
of gold, though.

Sorry for the cold water but next week starts the decay of some over priced
buildings just like the millennium dome.

The only place I can think of that actually did anything with the remains
of the olympics was Barcelona – at least thy actually improved their
infrastructure.

The sailing was totally nail biting too.

I concur Gildas. I found myself watching the Adams match and thinking “This
is fantastically exciting; but I hate boxing!?” and being utterly thrilled by
her win. I did wonder, when I saw the dancing horses, why there isn’t sheep
dog trialling but then my imagination took off and I visualised chinese
training camps and rejected collies and thought better of it. You haven’t
mentioned the Circus Skills either, which were mesmerising and more balletic
than I recall from my youth.