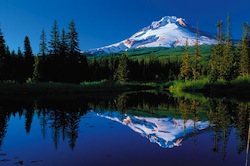 Oregon. It’s that wide open state of mountain and forest where American’s dream of a life of self sufficiency, fish for your supper, shoot your breakfast, camp fires, and a thumping great 4 x 4 to tear along the forest tracks…

It is the American dream, a return to the lifestyle of the pioneers. Take care of yourself, take care of your own, live on the bounty of nature. Even in Oregon the State is encroaching. Those who dream of a similar lifestyle might care to take note of the result of a court case that has been on going there for ten years now.

Water, that most essential ingredient of life for mankind. It doesn’t belong to mankind though, even when it falls from the sky. It belongs to the State. Allegedly.

A Oregon man has just been jailed for 30 days and fined $1,500 dollars for allowing rainwater that fell from the sky onto his 170 acres farm to drop into the ponds on his farm, thus depriving Medford Water Commission of its rightful drops of water…

Garry Harrington lives in an area of extreme wild fires:

“When it comes to the point where a rural landowner can’t catch rainwater that falls on his land to protect his property, it’s gone too far,”

“The government is bullying. They’ve just gotten to be big bullies and if you just lay over and die and give up, that just makes them bigger bullies. So, we as Americans, we need to stand on our constitutional rights, on our rights as citizens and hang tough,”

You will buy the very essence of life from the State.

At what point do people rise up and shoot the lot of them?

If the rain fills holes in the ground, that would be fine. Shoving up
thumping big dams is another question, though. Like, what happens if they leak
or collapse – amateur dam builders are about as desirable as amateur general
surgeons.

“a return to the lifestyle of the pioneers”: what? You’re allowed to
slaughter the Injuns?

Yes, but only if you give up the 4×4 for a horse-drawn wagon. Oh, and the
Injuns are allowed to shoot back….

We delude ourselves if we believe we are free.

True, but some of us consider ourselves very reasonable.

See that nasty red ink on all our bank statements? We did not spend our
money, the government did.

“At what point do people rise up and shoot the lot of them?”

Drowning would be more apposite.

I don’t know about Oregon but certainly in other states of the South
Western USA there is a thriving market in water rights. The rights attaching
to the water in Colorado, for instance, are explained here.

In glorious Tasmoania, just south of the Oz Big Island, the same farce
happens. ALL the water it seems belongs to the ‘Hydro’, so rivers, ponds (or
dams as they – we – call them here), lakes etc all contain ‘Hydro’s water’. If
a farmer builds a dam (digs a hole) and water collects in it, he has to pay
for it. He can ‘buy’ a licence and be ‘allocated’ an amount, for a hefty
price. The ‘rationale’ is that were it not for his dam (pond) the water would
have tricked into a river somewhere. I understand that the Labor/Green Guvmunt
here ( Well you would not expect otherwise would you?) would like to charge us
for the rain that falls on our clothes as we eventually take it home.

By the way, the ‘Hydro’ produces all our electricity. The Feds, under PM
Gloriana Ju-Liar (Labour, LyingToadsville), has recently introduced a ‘carbon
tax’ which she promised not to do. (“There will be NO Carbon Tax from a
Government I lead”). You would think that we Tasmoanians would not get taxed
on our electricity as the mainlanders do (they have coal-burning
power-stations), as ours is produced by ‘clean, green means’, but no. We get
taxed too. It is called ‘equity’. But we export it to Victoria and South Oz
tax-free. THEY get the benefit that we should enjoy. I am not sure just how
this is equitable, but heck, Gloriana is a Feminist and they all have the
wierdest ideas about equity.

In the UK, our water companies are even smarter.
They charge you for all
the free rainwater you collect on their behalf if you arrange to divert it
into their collection pipes by placing gutters and downpipes on your roofs. If
you choose not to donate them that free water, instead allowing the rainfall
to drain to earth, which means they then have to wait a while and spend vastly
more collecting it from deep aquifers, then they don’t charge you.
You
couldn’t make it up.

Brilliant Mudplugger – I had never twigged that, you are right!

Dear Sir, How do you stop rain water from falling into Ponds? Thank you in
advance for your assistance. Yours faithfully, Elena ‘andcart.

It would appear that while you’re allowed to collect rainwater in
waterbutts etc, what you’re not allowed to do is block off channels that flow into the local river and create
dams on your own property (specifically, in this case, two 10-foot dams and one 20-foot dam.)

Not that even that should be necessarily illegal, but somewhat different to
the other Daily-Mailesque reports that otherwise showed up on a google-news
search.