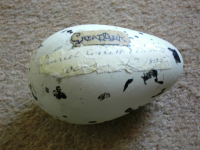 The Great Auck, a humourless, preening bird, thought to be deservedly extinct, has been sighted flapping its ungainly wings in the Blogosphere. Whilst agile enough in the boardroom of Northcliffeâs regional media division, it is clumsy and unsuited to the sarcastic air of the Blogosphere.

Known to keen Twitterati as Stevenus Aucklandii, it was first spotted several days ago in the sights of a parody Twitter account, an event which failed to amuse the lumbering Auck. Previously watched only by a select band of around 100 dedicated in-house Twitterers, its attempts to escape the attention of the parody Twitter account has revealed its existence to Twitterers everywhere, they gather hourly, around 1700 already this morning,  to watch the Auck make its maladroit drop into the famed Streisand trap.

Mystified? Let me explain. Steve Auckland you have probably never heard of, unless you have a penchant for collecting trivia about humourless Yorkshiremen. Or you work for the Daily Mailâs little known regional spin-off, Northcliffe Media Ltd; if you do work there, you probably welcomed a little light relief from the pressurised atmosphere that falls upon a sub-division under threat of extinction.

That light relief was provided by a spoof Twitter account, @UnSteveDorkland. Every movement of the Great Auck was documented in sarcastic style. The introduction of âThe Auckland Cupâ, a tea-mug emblazoned with a picture of said humourless Yorkshireman, apparently awarded to the company man who had made the greatest contribution to the division attracted particular satire at a time when many long serving employees were finding themselves redundant. Failing heads of department were to be summoned to the Great Auckâs palatial nest, presumably for those âpussiesâ to explain themselves over a saucer of milk.

Now you will note that the spoof account is carefully labelled âUnâ Steve Dorkland, further more it is Dorkland, not Auckland, as befits a total Dork. Even the Avatar is that of George Clooney. Such humour was wasted on Our Benighted Yorkshireman. Either @UnSteveDorkland was spectacularly good at working out what a pompous, thin skinned, Yorkshireman was going to do next, or he was an employee of Northcliffe Media Ltd. Either way, Steve Aukland demanded his head on a platter. The deep pockets of the Northcliffe empire were raided and the eminent California firm of , Knobbe, Marten, in the form of Ms (donât forget the Ms) Lynda Zadra-Symes was despatched to the California Court House to command, no less, Twitter, to reveal the identity of this thorn in the Yorkshire backside. Give us his e-mail address, and IP address, they commanded. We wish to protect our employees from this harassment.

Which is kind of ironic, since the Daily Mail was firmly behind the activities of Twitterers who revealed Ryan Giggs to be the unknown footballer who used the law to protect his reputation and dignity, and appalled at taxpayers, otherwise known as shareholders in UK plc, having to pay for the services of expensive lawyers to try to uncover the identity of the unknown Twitterer known as Mr Monkey who âmercilessly criticisedâ and lampooned executives of South Tyneside Council.  Then they thought that such humorous parody âcame with the territoryâ of being a public figure, head of an organisation. In that case, Twitter rolled over and released the details of Councillor Ahmed Khan, who was the person behind the Mr Monkey account. In Twitters defence, the Council were at least alleging that some of the posts were libellous. However I can see no evidence that Northcliffe are claiming that @UnSteveDorkland has made libellous comments, just that they have pricked the paper thin hide of a man who should have better things to do with his time.

The bill so far? Well, that depends on who you believe. South Tyneside claim the costs are less than Â£75,000. We have been told that the figure is much closer to Â£250,000, and rising. Either way, isnât it a scandalous use of public money?

Mmmn, I love the smell of fresh hypocrisy first thing in the morning. If the fearless investigative reporters on the Daily Mail are to be believed, then Â£250,000 of shareholders money is also an obscene use of the dwindling profits at the Daily Mail at a time when so many journalists are fighting for their jobs.

The Great Auck has laid his fragile ego on a rocky ledge, exposed to the worst elements of the Blogosphere.

We can surely ensure the survival of the Twitter parody species by signing up to follow @UnSteveDorkland and letting this ego hatch in the full glare of the Streisand effect. I want to see @UnSteveDorkland trending by Monday night. We can do it.

Or the snark side?

The snark, it is strong in this one. Important it is, to keep the snark
from going over to the dark side.