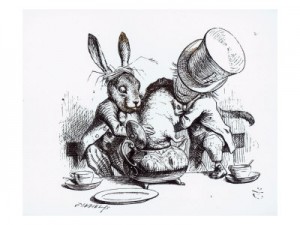 Don’t fight it, don ‘t panic, just pack up your things quietly and leave the country.

No wonder they’ve called the military in to guard the Olympics, who could they hire in the civilian world? This fellow?

A MAN got his hand stuck in a teapot while trying a fish out a teabag.

He called the Fire brigade, naturally. That’s what the 999 service is there for isn’t it? Fire-fighters from Whiston attended the call-out at an address in St Helens shortly before 9am.

Did they fall about laughing? Did they berate him for wasting their time? Nope, they thought they might have spotted a teensy weensy bit of blood on his hand, and they called out an ambulance.

We requested an ambulance as we could see some blood but did not know how badly his hand was cut.

The Fire Brigade cut the tea-pot up into little bits, the ambulance staff inspected his hand and decided it was such a teensy weensy little cut it didn’t need any treatment, and they both called out the local newspaper reporter to practice his joined up writing and fill the space where the news ought to be. He didn’t do much to impress either! “Trying a fish out a teabag”. What, was he trying to eat a fish out of a tea bag? Proof reading kiddo.

9am and this plonker was still having his tea, eh? I do hope he was a night shift worker, I really, really do, I cannot bear the thought that taxpayers are supporting such an utter waste of space.

Is there no problem in life so small that you couldn’t consider solving it by yourself? Trying the old washing up liquid trick? Tying the tea pot to the back bumper of a car, you’ll soon get fed up running after it? Even walking round to the Fire Station in desperation? How did Britain win the war?

“Hydrogen is not the most abundant element in the universe, stupidity
is”
Frank Zappa

Good job he he didn’t also employ an electro-fag to calm his nerves, that’s
all I say.

Couldn’t he have turned the teapot over in order to retrieve the
teabag?

I wondered how long it would take a mere male to perceive the obvious
solution!

I feel that it was rash of the Fire Brigade to attend this incident and
approach the man without conducting a proper health and safety risk
assessment; certainly had he been an epileptic who had had a seizure and
tumbled into a three foot deep pond, there to lie face deep until he drowned,
they would rightly have done so before intervening. I do not believe it is
right to expose our “fire fighters” (gender neutral units of pyrometical
encounter and control) with a scenario such as this without a proper course
and of course counselling afterwards. Perhaps damages?
Meanwhile, in
Afghan, 18 and 19 year olds leave their bases and prepare to dance the Afghan
Two Step, watching for mines…
G the M

JP, you don’t understand the system. The idiot was panicking so his
breathing wasn’t normal = respiratory distress. Then someone thought they
spotted blood = major haemorrhage. Result: ‘A’ category life threatening
emergency requiring an 8 minute response. Heaven forbid that these morons
should ever use their common sense. This typifies the vast majority of the
calls we deal with on the “front line” these days.
To quote the old
NHSblogdoctor “some people give more thought to ordering a take-away pizza
than they do to calling an ambulance”

Was the victim was trying to fish-out a tea bag from a teapot containing
hot tea (?was the question asked??). Running cold water into the spout may
have been sufficient to reduce a swelling; a phenomenon well-known to male
UK sea-swimmers when it affects a different part of their anatomy.

Our teabag dispenser is one of those cookie jar novelty ones.
The JAWS
one that makes the shark note music when opened. If I jam a fist in that
headline would be “Brave MP rescues teabag from teeth of Great White”

Of course, the Emergency Call-Centre operative could be at fault by not
first suggesting he let go of the tea bag, to enable his uncurled hand to be
extracted.

failing that, I blame the education system.

Didn’t anyone teach the ‘victim’ that even a thin coating of Fairy Liquid
would lubricate the surfaces to enable easy withdrawal? [Or even a smear of
Flora, or, AnalLube (I’m told)]

My criticisms of the education system would be more believable if I’d
spotted the lower-case “F”, before hitting the Submit button.

If he’d just made himself a pot of tea to calm himself down before he
rang 999, he’d have thought of one of those.

And now elfnsafety will have to draft “safe tea brewing instructions” using
EC standard teapots with a minimum lid diameter of ?cm (committee to report by
1April 2013). Government will need to budget £X billion to implement the new
standards and train all bureaucrats. A safe tea brewing institute will be
built in St Helens to train the bureaucrats, it will be opened by david
camoron who will praise this whole initiative as the “type of thing Britain
does best” and hope it will become a beacon for training bureaucrats from
around the world, it will be funded by reducing the Ministry of Defence
budget.

It’s quite clear the chap was having a pot of tea with his breakfast. Whty
did he use a nasty metal one pot instead of a proper china Brown Betty .
I
realise that in France the locals have cafe ou chocolat in a something like a
cereal bowl (and dunk croissants in it) for le petit dejeuner, but for many
the day still starts with a nice cup (with a handle) of tea in England.

There must be similar news items from French local newspapers about Gaston
calling les sapeurs-pompiers out after getting stuck in a pissoire. Where else
would Jacques Tati have got his inspiration?

Sometimes the only reaction to such utter idiocy and incompetence can be to
go into a darkened room and quietly bang your head against the door frame till
you cease to care any more.

Every day you read or hear something and say to yourself, thats it i’ve
heard the lot, and sure enough without fail within a few hours we’ve stepped
another rung back down the evolutionary scale.

Please may the lunacy reach a low point soon, i can’t take much more.

I kid you not ‘cos I wuz there. During the by-election to replace the
sainted Peter Mandelwotsisname in Hartlepool, at the height of the campaign
the banner headline in the local paper was “Local Girl stung by wasp”

During the war we did not have tea bags and in any case brewed up in
teacans with a lid. If any tealeaves did get taken in they would be spat out.
It was all so much more civilsed than modern practice. With experience you
could hit a resting fly at five yards.

Yet another example of the modern malaise of refusing to accept the
consequences of your own actions. Under this current regime (and the previous
one), it is actively encouraged to shift the responsibility onto someone else,
after all, our politicians have been doing it for yonks. No doubt some cretin
in the local authority will read the article in the paper and arrange tea-bag
removal lessons for this poor unfortunate, the cost of this coming from that
saved by the subsequent closure of the senior citizens weekly get-together
(priorities, you see). It’s a shame that I was not the editor of the paper
reporting the story as the headline “Stupid tw*t jams his hand in a teapot and
then declares his intention to run for office.” rather appeals to me. I
despair. I really do despair.

Many such people used to be employed in the mining industry around St
Helens.

No wonder they closed the mines. Safer for all concerned, now.

Was that the treacle mines, engineer?

Jam butty mines – any fule no that!

Yep. Treacle wells – and they were in Knotty Ash.

One person/incident cannot reliably represent the state of the nation.

I do get your point, but is not a large proportion of the state of our
nation due to the fact that we are so risk-averse, so litigious, that people
are afraid to use common sense? Me? I’d have smashed the teapot off my hand,
disinfected any cuts and if necessary, applied plasters and/or bandage and
told everyone what an idiot I had been.

I have no idea why this particular man did not do something similar. Who
knows? Maybe the teapot was a gift from a sainted aunt and had enormous
emotional value to him? Or, just a guess, that if he needs to re-use teabags,
he might regard the loss of a teapot as a greater expense? That’s not to
excuse what we might agree is a silly response to call for help, but what’s
the betting these fire/ambulance professionals have to cover themselves
against the possibility the man was a Hep C infected teapot wielding
schizophrenic and that they would have been sued if he had brought harm to
anybody else?

And these sorts of stories are bread and butter for local press who have to
fill their pages with something more than “it rained yesterday – again”. No
excuse for the poor English of the journalist but any sub worth their salt
would have caught that.

It was a metal teapot. They are usually much more difficult to get your
hand stuck in but this particular ovoid design baffled a monkey-brained
nitwit. I still don’t see why he couldn’t get a cab to A&E, although
paying was going to be unusually tricky, but other people manage with one
hand. There aren’t many teapot-based fatalities are there?

Besides, an iron-fist might be a very useful thing to have; you would
never need to find a hammer ever again to knock nails in to the wall, and
you’d do well in a fight. It would be difficult to define a teapot as an
offensive weapon, especially as it was now a prosthetic. It’s not quite what
the steam punks have in mind when they think of cyborgs, though. Then again,
it’s not what cyborgs have in mind either. The Daleks did OK with a sink
plunger but I can’t see a race of teapot-handed numpties ruling the
universe, even if they manage to seriously inconvenience it. They should
have called Dr Who.

“How did Britain win the war?”

We didn’t, Germany has fulfilled her destiny, or hadn’t you noticed?

Britain didn’t win the war, we ended up by luck on the winning side but
for us it really couldn’t honestly be described as any kind of meaningful
victory.
In 1945 Britain ended up completely bankrupt and totally in hock
to the United States barely able to feed herself without foreign assistance.
The Great British Empire began to rapidly disintegrate and fall apart and
the debts incurred during the war took a further 60 years to pay off and was
a complete drag on the post war economy which with the loss of Empire tanked
horribly. Post war the UK rolled from one economic crises to another.
Definitely not a victory.