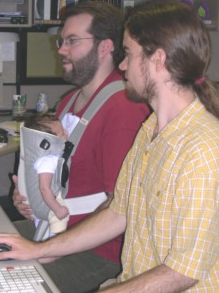 Not for me Thank God, just watching the BBC2 documentary on Taxi firm Addison Lee was enough to send shivers down my spine.

Following on from yesterdays post, I bring you the latest in Feminism. Paying too much for child care? The answer is take the baby to work with you.

You might have guessed that the Head of Human Resources at Addison Lee was a woman, no man would ever have dared to suggest this chaos. As if your average call centre was not sufficiently Hell on wheels to dissuade you from turning up to work, Clare Mitchell has decreed that in order to âsupport staff through early parenthoodâ, bringing a few dozen screaming infants and disruptive toddlers into the workplace is the perfect solution.

As workers battle with the logistics of getting 3,000 taxis a day into the right place at the right time, they must do so against the insistent wail of angry new borns, bored two year olds, and a cacophony of discordant voices trilling lullabys to the little darlings in order that Mummy can get some work done. Keyboards sticky with breast milk, computer screens covered in felt tip âart worksâ, the office microwave permanently scattered with the remnants of purÃ©ed apricot and grass fed lamb with hand made pasta, the right leg of My Little Pony protruding from the electric socket, and you will find a toddler seat wedged into the loo when you finally escape there to get some peace and quiet.

I predict that the mini-cab wars will start up again and be far more vicious than anything seen before. Incidentally, if Addison Lee are so family friendly, why canât you order a baby seat in one of their taxis?

Work is where men and sane women go to escape rug rats, how can anybody concentrate with someone elseâs inarticulate toddler tugging at their shirt sleeve? When you order a taxi for the 6am run to Heathrow, will âSorry Justin spilt his eggy soldiers on the keyboardâ be the new excuse for it not turning up?

Nicola Horlicks was interesting, âPeople make a business, and if you want the best people you need to invest in them. That means making sure you offer family-friendly policies.â The implication is that the best people are women, and women with childrenâ¦I donât agree. The best people for any business are those who have their minds totally focussed on the business â what say you? Fancy going to work surrounded by children? What is wrong with a crÃ¨che if you are determined to attract young Mothers to your work place?

Babes in the workplace, yes; Babies, no!

Children in the workplace?? I thought Iâd heard it all but I was wrong.Why
is it that Feminists expect someone else i.e. the taxpayer to pay for their
lifestyle choice? Is it that the bulk of taxes are paid by men so its alright
to steal it from them? Whatâs going to happen as more and more women have high
earning and therefore high tax paying jobs? The costs of the state will
increasing fall on women as men decide to opt out of the rat race and work to
live rather than work to live? Moral of story: if you canât pay for something
or someone then you have to go without!!!!

It really is amazing what emanates from human resources departments
(whatever happened to personnel dept or merely payroll?). A more feminized ,
and dare I say it, superfluous department you will not find (unless you
include public relations-another feminine ghetto). They all trot out the same
nonsense about empowering employees using nonsensical motivators while survey
after survey points to increased compensation as a huge motivator.

Of course decent wages cannot be paid because the workforce had to be
expanded to accommodate many women who demanded their right to work and pay
others menial compensation to bring up their maladjusted and ungrateful kids.
The economics of this grand experiment just do not add up for most families
and the social costs dwarf any so-called benefit.

I really thought women were much too smart to fall for this nonsense.

A lot of workplaces already have whingeing, crying, helpless people in
them; fouling themselves, needing to be fed, watered, burped and put on the
potty. Demanding attention, utterley clueless without adults to look after
them. They are called management.

From the perspective of retirement as a manager in various capacities and
places, dear Yardarm, a bit harsh. I have some sympathies with Brentfordian
above, and yes, I do know we choose to do it.
Retirement does bring with
it escape from exposure to the latest management wheeze that is guaranteed
(or youâre not doing it right), to supercharge the workplace. For those
familiar with âManagerial Effectivenessâ by W. J. Reddin (early 80â²s?), how
about a new fun management style to be known as âMalevolent Autocratâ?

However, on the âFâ issue: fully accepting the historic inequalities, I
do think many men would also like interesting, rewarding and fulfilling
careers too. For the most part they, like most working women, get a job and
get on with it.

Just start smoking â that tends to get rid of the little ankle-biters when
brat-obsessed Yummy Mummy doesnât want her Tarquin exposed to the exhaust.

Iâm surpised the Safety Elf hasnât had something to say about it. Maybe
they have â sometimes you have to try stupid ideas to demonstrate just how
stupid they are. Machine shop or construction site with a creche, anyone?

I read this sort of thing with interest, of course, but quickly shift into
smug, self-indulgent satisfaction mode. Retired, you see. Let the crack-pots
do what they will.

They are good for cleaning chimneys though!

Babes in the workplace! Anna, really, what a wind-up!
(Although not
personally averse to âeye candyâ, I accept itâs not politically correct to say
it out loud.)

âPeople make a business, and if you want the best people you need to invest
in them. That means making sure you offer family-friendly policies.â

If you want the best people, and invest in them, you could just pay them
enough so that they can afford decent child care.

But taking kids to the office is bad for the office, and â unless itâs once
a year at christmas â quite dull for the kids, too.

May be wrong â apolâs if am, but this employer is increasingly finding
that heâs supposed to supply all the benefits that the state used to:
maternity and paternity leave, prayer rooms, flexible working, pensions,
minimum wage (even if both proto-employee and I agree that a job can be
provided at a lower wage and the employee is anxious to take it, we canât â
prison awaits were we to agree a contract between ourselves. And before Iâm
jumped upon, such a job would mean a presence in the workplace 8 hours a
day, but work for perhaps 4, so the remaining time would be free for the
employee to write his novel, or watch YouTube. Against rules, and nowt is
allowed if against the rules. So: no job; no novel; no taxes.). On and on
Iâm afraid. And as well as providing all these âbenefitsâ, my company is
taxed to provide cash for the state to, well, not supply these benefits. And
the âprofitâ Boche suggests I use to allow my employees to buy child-care?
Have you looked at the economy? Have you looked at the Government paperwork
necessary even before I open the doors? We donât work any more, we fill in
forms and twitch every time we act because sure as hell weâve stepped over
some Government line. Absolute insanity.

Still, retirement beckons and Talwin makes it sound like paradise.