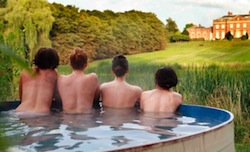 Well over a decade ago, a motley collection of dreamers, thinkers, artists, radicals and romanticists decided to get together under the stars over a summer weekend. We wanted to make a place to party, free our minds, lose our hearts, learn, discuss and be inspired and see what is achievable as a community.

So says the Shambala Community. Amongst other earth shattering events, they invented The ShambOlympics. A measure of the success of this event can be seen on the front pages of the Daily Mail today – The ShambOlympics have become a world class event, requiring several brigade sized dollops of our shrivelled army to monitor, (currently 17,000 and rising!), an army of 8,000 students, and now several hundred police are to be drafted from country forces to fill the gaps in security which appear by the minute.

You might wonder how G4S, the company with the £60 million pound contract to staff the security, could get it so badly wrong; who was advising them of the requirements of a modern security system, how many men would be needed, what calibre of men to employ?

Step forward the legal firm of White and Case. Ooh! Who is that pictured on the landing page? Tom Winsor? Couldn’t be the same Tom Winsor who is advising the Police on the requirements of a modern policing system, how many men would be needed, what calibre of men to employ?

Now when G4S previously successfully bid for the £200 million contract to run a Lincolnshire Police Headquarters, Theresa May was specifically asked whether there was any conflict of interest between White and Case advising G4S, and their senior partner Tom Winsor advising the Home Office on Police reform and how they wouldn’t need so many policemen in future.

‘Absolutely not’, was the reply, ‘perish the very thought’. Why Tom Winsor never even noticed dozens of G4S executives rushing around the office of Case and White during the run up to the negotiations, he had no idea that the firm was advising them, he wrote his report on Police reform ‘in his private capacity’ not as a partner of White and Case. Good, glad that’s cleared up then.

I just wonder whether Tom Winsor noticed dozens of G4S executives rushing around his law firm’s offices whilst they were negotiating to provide security for the ShambOlympics? You know what I mean, that sort of deja vu feeling – ‘Hello, haven’t we met before’ as they pass in the corridor? Not that I’m suggesting a conflict of interest or anything, not in a top law firm, I’m not that daft…but wouldn’t you think that when Tom saw the same people reappearing to speak to his partners, he might tip someone the wink – sort of ‘Don’t rely on the Police to fill the gaps, I’m busy telling the Home Office she can pension half of them off‘ sort of thing……? This independent advisor business is difficult to get a handle on.

And who exactly is going to be left behind to guard those parts of Britain that attempt to carry on as normal? Surely any self respecting terrorist would be looking to strike elsewhere?

Do yourself a favour – go to the real ShambOlympics, no transport problems, no accommodation problems, no zil lanes, no lottery for tickets, naked women in hot tubs, no contest.

Mme Raccoon
Good to see you’re out of hospital. Great piece
this.
I’ve been flogging another dead Games-horse for the last 48 hours,
and wondered if you can throw any light on (a) the reason why closet Islamist
and England rubbisher Mohammed Bari is on the Locog Board (given he is opposed
to the idea of women athletes) and (b) why he is allowed access to sensitive
Games security plans given his known links to, and ‘charitable’ contributions
to, Hamas and Jihadists everywhere.
What exactly is he contributing to the
organisation of the Games, apart from an insane security risk?
http://hat4uk.wordpress.com/2012/07/15/shambolympics-why-is-the-boss-of-the-east-london-mosque-on-the-management-board-of-locog/

Yet another take on the last days of hitler…. G4ucked realise they don’t
have enough staff…

Perhaps living sleepy W Sussex doesn’t help, but I do find it difficult to
generate any enthusiasm for this olympics nonsense. In conversation with a
more sportminded neighbour yesterday I learned that the olympic torch will be
passing through Worthing and Arundel on Monday. Consensus was quickly reached
that they will be places to avoid rather than a spectacle to see.
But at
least it won’t be wall to wall football. Anything but that please.

In composing a rant about the state of the Olympics and the general costs
thereof, I have been much informed by contrubutors to youtube, who are quite
clear that the whole thing is an “Illuminati” plot. Although who or what these
“Illuminati” are varies from Zionists to Shape Shifting Lizards, according to
which source one consults. I am minded to reject this conclusion, unless the
Illuminati are a bunch of self serving greedy bastards sucking up public money
in a corrupt world of back handers and self aggrandisement, all riding piggy
back on the taxes of the poor proles. On the other hand, maybe there is
something in it after all.
Expect more Olympic Grinch stuff soon!

I was listening to the Test Match Special commentary on a limited overs
international recently, when Jonathan Agnew was discussing his forthcoming
duties commentating on the Olympic Archery at Lord’s (I think it was raining
again!). He related a conversation he’d had with Mick Hunt, the Lord’s
groundsman, about how he felt about having his hallowed turf covered by
temporary stands and used for Olymipic Archery. “Hurrumph,” replied a clearly
unimpressed Mick, “Posh man’s darts.”

Ah, the groundsman at cricket’s Mecca – a gentleman whose name always
requires extreme care in its expression, especially by the fair gender
enquiring if anyone has seen him recently…….

Not to mention the delicate lug-holes of QPR players.

I’ll take a ticket for the Phwoarhundred metre hurdles!

About the only thing I’m going to watch is the women’s beach volleyball.
With my mate Mr Kleenex.

My latest contribution to this calls it The Stan And Ollympics and refers
to my post of Tuesday 9 May 2009 when the strategy behind the planning and
security was disccused. Quite how the present mess has arisen is an
interesting question. Ask at your local Macdonalds when you order the fries
(limited to Macs at Stratford), burger and biggest Cocal Cola.

“Surely any self respecting terrorist would be looking to strike
elsewhere?”

We seem to be lucky in this country in that our current terrorist threat is
– incredible as it may seem – even more hopelessly incompetent than our
government!