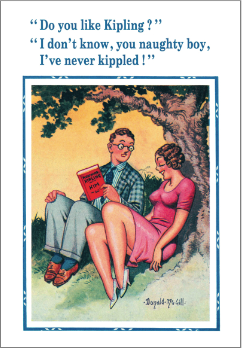 Over six million people bought this Donald McGill post card and weren’t offended. However, local councillor’s were on his tail, and in 1953 he faced a show trial, and was ultimately fined for his ‘obscenity’.

It seems that local councillors are just as easily offended today.

COMIC seaside postcard-style art erected by Cleethorpes In Bloom has sparked a stern response from North East Lincolnshire Council – which has failed to see the funny side.

The first shows a man walking in dog waste, while a man berates his dog saying “No, I said sit”. The second shows a man peering at two bikini clad ladies on the beach while his wife makes a supposed sexist comment.

Councillor Shaw said: “The council support all the In Bloom campaigns, but the pictures of the man stepping in dog mess is not funny.

Complaints have been made so the boards must be removed.

Eh, ba gum, they’re a humourless lot up in Cleethorpes.

Are you offended? Do tell Councillor Shaw on http://www.annaraccoon.com/politics/for-the-easily-offended/chris.shaw@nelincs.gov.uk ! Better still, send him  postcard…

Having had the pleasure(?) of visiting Cleethorpes some years ago, unless
things have changed since then, I would have thought that Councillor Shaw
would be better employed looking at the problems of drunken men and women
vomiting, urinating and defacating in the streets; criminal damage by feral
youths; beggars in shop doorways asking for loose change and then using
obscene insults when you decline to give them anything; or the pubs which seem
to cater for the loud and obnoxious. These may, in the first instance, seem
matters for the Police to resolve, but many years of local and national
politicians denuding the Police of funds, equipment and personnel means that
the local authorities have the overall responsibility to improve their
community. Complaining about double-entendre postcards doesn’t come close.

an interesting social commentary on current standards of public behaviour,
or in the falling standards of spoken English, p’raps. But funny?….

“Councillor Shaw said: “The council support all the In Bloom campaigns, but
the pictures of the man stepping in dog mess is not funny.

Complaints have been made so the boards must be removed.”

So then, if I found it offensive to have streets/buildings named after
convicted terrorists, would Nelson Mandela house have to be renamed? No, of
course not because I am betting Councillor Shaw rather likes Nelson. Thus the
complaint is simply the Gaulieter requires to ban shit he doesn’t personally
like.

The dog mess one is particularly offensive. Both gentlemen are improperly
attired (no caps), and the dog is not a whippet. Where do they think they are,
dahn sarhf?

I am offended by the word “offended”.

Oooooh Matron!!!
Or to quote from a high legal authority:
“Why dont
you self destruct, you boring old automaton”
Balogh v The Court of St
Albans, per Denning MR. Familiar with that, Anna? Worth a post on its
own,,,

Whatever happened to Free Speech— this includes the right to offend, but
not threaten?
Over many years a section of society likes ” blue” humour,
whereas another does not like it
I have to say the section of society that
does not like ” Blue” humour is not forced to listen to it or read/ watch it—-
but still feels empowered to censor other people.
I’m not forced to watch
the programmes they like, so dont tell me what I can watch or not.
Many of
those who have such high morals shelter such dark secrets.
So as Roy Chubby
Brown would say ” F*** Off you C******”

He’s just a typical humourless labour councillor who got in on just over
half of a 22.7 % turn out for the local election.
Here in Grimsby the
electorate will vote in a red arsed baboon wearing a red rosette.
Bawdy
cartoon humour apparently worse than unemployment, drug problems, dirty
streets…

I congratulate Councillor Shaw on his particularly subtle method of
improving publicity for his fiefdom’s efforts.

Whereas, I do not find the “In Bloom” competitions at all funny.

The endless hanging baskets are tedious and expensive, and if you are
bothered about water conservation, they are the very worst forms of gardening
requiring gallons of fresh water to be moved around pointlessly. Instead of
repairing footpaths and keeping things neat, the numpties leave the dogs mess
on the floor and go for floral bollocks swinging where politicians ought to
be.

There are civic plantings which enhance the environment and make the best
of scraps of in-fill land; I know of several. However, you can tell what a
scam the hanging baskets are by the way the boss always nabs that job for
himself and leave the other gardeners to get on with the proper work of
keeping the permanent displays up to standard.

Did McGill ever do one along the lines of “Are you just pleased to see me
or is that a local councillor in your pocket?”

Moreover, did he do one along the lines of ” Cleethorpes in Bloom”?
Whoooaah!

Cracking comment WOAR! I was particularly partial to “floral bollocks
swinging where politicians ought to be”.

I am taking a crash course in How to Talk Footballer.