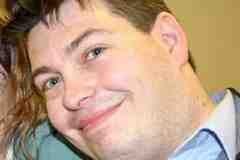 God God! – Is Inspector Gadget really a teen age belly dancer in Scunthorpe? An unmarried Mother of four different brats with a Brazilian wax and ‘I shagged John Terry’ firmly tattooed on the left buttock?

Quite possibly, going by this mornings revelations. Inspector Gadget may be maintaining anonymity, so far, this morning, but Inspector Winters has been unmasked. I haven’t been so shocked since ‘Gay Girl in Damascus’ turned out to be a 40 year old male student in Edinburgh.

Inspector Winters, the Telegraph’s much vaunted ‘inside track’ to the Tottenham riots turns out to be not an Inspector, not a policeman, but a well known con artist. Ellis Ward.

Inspector Winter was the darling of the police social media scene. At the height of last summer’s riots, he tweeted and blogged about his experiences on the front line — comforting people who had been burnt out of their businesses in Tottenham, arresting suspected rioters in dawn raids and drinking tea with bedraggled fellow officers in rescue centres.

His fan base of more than 3,000 Twitter followers included police and the media, and he was even commissioned by The Daily Telegraph to write a first-person piece that described the “chaos” of policing the riots.

Judging by the number of comments on his blog, he succeeded in diverting a fair bit of attention from the genuine police officers who were writing about their experience. Curiously, in the past few minutes – it was there when I started writing! – his Telegraph article has vanished from sight…http://www.telegraph.co.uk/news/uknews/crime/8689411/London-riots-police-officer-tells-of-Tottenham-terror-in-anonymous-blog.html now returns a 404 error.

His real name is Ellis Ward and he is in prison awaiting sentence having pleaded guilty to a series of credit-card frauds. More seriously, he is under investigation for impersonating a police officer relating to his conduct during the riots, his Twitter account and his media appearances.

He was wanted by police for fraud in 2009 but he was released from a previous prison term before detectives were able to question him. He spent the next two-and-a-half years on the run, effectively hiding in plain sight by visiting police stations, mixing with officers and pretending to be one of them.

[…] Ward’s claims ranged from the believable to the implausible. In Ware, Hertfordshire, he posed as Ethan Winchcombe, a major in the Royal Military Police. He told local residents he had a false leg after an incident in Afghanistan, had served in Northern Ireland and owned a series of restaurants and a garden centre. He drank at the town’s Royal Legion club and even participated in the Remembrance Day parade last year wearing an RMP uniform.

The Inspector Winter Blog is still up – I guess there’s not a lot he can do about it from a prison cell. A great shame, for he is obviously a talented writer – Johann Hari anyone? – his ‘resignation statement’ was a tear jerker.

Writing the letter asking to leave the job was one of the hardest things I think I’ve ever done, I sat there at my desk thinking about everything that had happened to me in my service, the good times and the bad, I think there were more good than bad really. Being at the scene of so many memorable events, getting to do things that most people would never even think about. […] Briefly, it broke me to see my troops sleeping on the floor of a police station, it broke my heart to tell someone special that I was having to cancel our trip out again because of work. […] How many times have I had to call or text to say I can’t come out, how many parties have I missed? I did it all with a smile though (mostly) because I was in love with policing. I get to drive fast cars, and do cool things and I get paid for it. How many people can say that? I used to wake up excited about going to work, if I’d slept at all which sometimes was rare…

Will Old Holborn turn out to be a 74 year Grand Mother from Ohio, is Obnoxio really a snake hipped transvestite Spanish waiter, is Guido Ed Balls’s better half? We should be told.

I cant believe this. I actually met this same guy in a pub social meeting
in London and sure enough he gave an account of snippits of his time past and
present in the RMP. Not only that but I spent about 1.5 hours listening and
watching him talking to 2 other police. The other were asked to show their ID
cards, which they did. He talked about reorganisation of the upper ranks and
how it might affect him. He spoke about training and how he worked his way up
from Sandhurst onwards. I tell you it totally fooled me 110% and everyone else
who knew him there. Con artist? Yes and one of the best. Anyone who actually
met him would probably agree because he was so natural and confident about who
he was and what he did and yes he came across as in love with his job.

The “lost” Telegraph article is here, just in case anyone missed it. http://www.freezepage.com/1342127370VOOOTRLMCC

And that would prompt the question, what on earth for?

I’d like to think it’s just a passing fad, but I thought that about
Facebook as well.

Don’t bother with either, personally; but then I am sliding gently
towards grumpyoldness.

I count one of the women who was deceived by this charlatan as a friend (is
that the right word to use given it has been two RL meetings – both in the
same pub – and over a year of tweeting?) and she was extremely happy last
night when the details about him were finally made public by the Times.

If it’s confession time, OK, I’ll concede that I’ve not plugged a great
deal of mud recently – the spirit is willing……..

I admit it it. I vote labour, I wear a burkah and my real name is
Yasmeen.

OK, I admit it, so just call me Wayne.

Yep I was one of those 3000 followers… now he is definitely unfollowed.

‘Tis nothing new. Imagine the teeth-sucking and tutting when it was
discovered that George Eliot was really Mary Ann Evans.

Didn’t make any difference in Nuneaton. Why replace a perfectly good sign over the
hospital entrance? Besides, the doorway wasn’t quite wide enough for Mary
Ann Evans, not that she was a big girl, I mean her name.

And who is Anna Raccoon?

Only joking – and your Rikki Tik memories were wonderful – for me it was
the Crawdaddy and the Station Hotel in Richmond – oh, and Eel Pie Island.
Wonderful, grubby days. Incidentally, where are all the hitch-hikers nowadays?
Are students now rich enough to take the train?

That’s apocryphal isn’t it? The one about the girl cowering in the car
as the hitch hiker bangs her boyfriend’s severed head on the roof?
Powerful stuff though and, I guess, just about enough to make one brave
Virgin Rail.

I thought they did that on trains anyway.

That’s the problem with this site – it just brings the memories
flooding back.

On the mid-60s, as a 15-year-old, I spent the whole of the school
summer holidays hitch-hiking around Scotland with some pals (in pairs –
easier to get lifts). We never once encountered any problems, perverts or
paedophiles, just a huge range of different folk, only too happy to share
their drive with a pair of young strangers – even women driving alone
would pick up two teenage lads without fear. Some drivers even stopped off
and bought us meals, others went miles out of their way to take us to our
destination that day. And all done 300+ miles away from parents with no
mobile phones or other ‘rescue’ technology. Character-building stuff. And
I still remember those two girls from Broughty Ferry……and that wild Aussie
girl in Edinburgh…..and……

Thanks for the memories again.

Eel Pie Island – now there’s a memory. We once did a gig there with a
lesser known band called Pink Floyd. Needless to say they went on to bigger
things than we did! Shucks…………..

I remember the bar where you could get anything you liked as long as it
was Newcastle Brown or Newcastle Amber.

And then there was the queer caretaker who lived over the small stage.
Bent as an eight bob note and chased anything in trousers.