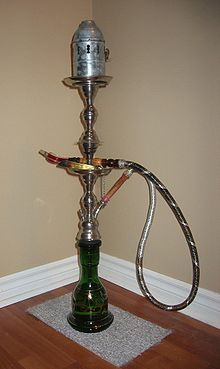 ‘Shisha Bar Danger’ screeches the Birmingham Mail, helpfully regurgitating the misinformation in the 2009 BBC post which explained that Shisha smoking was ’100 times more dangerous than cigarettes’  – a claim which has been comprehensibly debunked by Christopher Snowden, ably assisted by Kamal Chaouachi who denounced the BBC coverage as ‘complete nonsense’. Kamal Chaouachi is an academic who has spent his entire career studying the hookah pipe and its effects – but what would he know compared to the assimilated knowledge of the BBC Press Release Churning Department?

Snowden predicted at the time that:

Science by press release allows fresh ‘evidence’ to spread worldwide, reaching the public and opinion-formers with immediate effect. By the time any awkward questions have been asked of it, the message has been sent and the media has moved on.

Sure enough, the Birmingham Mail obliges and sends fresh reams of misinformation gambolling out into the spring cyber fields.

Why now? Ah, this new ‘danger alert’ was triggered because of ‘a report’ that ‘young Asian women’ were smoking Shisha ‘unaware’ of the harm that ‘they may be’ doing to their unborn child.

“World Health Organisation research shows that, in one hour, a water pipe smoker can inhale the equivalent amount of smoke as released by 100 cigarettes.”

What does this crackdown on behalf of an allegedly pregnant Asian woman who ‘may be’ unaware of the ‘risks’ assuming they exist consist of: that is difficult to say, for the Shisha Bars are out of doors at the rear of pubs, clubs and on industrial estates so are not breaking the existing legislation, nor is it yet a crime to permit a pregnant woman to smoke, so what exactly is Our Jacquie, Chief Enforcement Officer going to crack down on?

Birmingham has 15 registered shisha premises – a five-fold increase since the smoking ban was introduced in 2007.
But there are believed to be many more illegal shisha bars and new premises have emerged in Bromsgrove and Walsall.

Aha, Unregistered Premises, not paying proper business rates, not nearly as good a story as ‘danger to unborn children amongst Asian population’ is it?

Hookah smoking is one of the best ways to smoke. Try all the delicious
flavors. Maybe someday there will be Doobacco, a premium tobacco from
Switzerland, also in the States.

Doesn’t hookah smoking involve drawing the smoke downwards through water
and then into the suction pipe used by the smoker?
If so then the tobacco
smoke is effectively water washed, a process well used in
industrial
treatment.
In what way then is hookah smoking worse that direct cigarette
smoking?
Surely it is better.

Mmmm, this has got me thinking… can you still get gold seal these days?

The appearance of Shisha Lounges in Bradford coincided with the arrival of
th smoking ban. The local council busybodies are so up themselves with PC and
‘don’t-do-anything-to-offend-the-ethnics’ that it’s open season there to smoke
whatever you want wherever you want, as long as it’s called a Shisha Lounge
and most of the clientele are dusky.
As each pub-door closes, a shisha
lounge one opens……

My wife has a Shisha pipe. It is solid steel and she hits me with it when I
talk about politics during soap opera’s

I’ll get my coat

Onoes! the shishas are after we, us runs!
I have visions of them ambling
down the road like a sort of brass Triffid, occasionally inserting a hose
through an unguarded letterbox.
I’m so very glad there are no real problems
in the world for these people to concentrate on.

Shisha pipes have origin in Middle East with earliest descriptions being
1000 years ago.

Ha-shisha has been produced by people in Middle East into distant
unrecorded history and is smoked, produced and exported from Middle East
countries. Yet most ME Governments turn a blind eye and pretend it is not
happening.

Tabacco came to Ottoman Empire under 400 years ago.

Everyone claims they are only smoking Tobacco in these pipes.

I for one thoroughly welcome the thought the the Arabs smoke more weed and
explode less.

Finally a solution to ending violence in the Middle East. The peace
pipe

I thought shisha smoking was a bit like cigar smoking and you aren’t meant
to breath it all in?