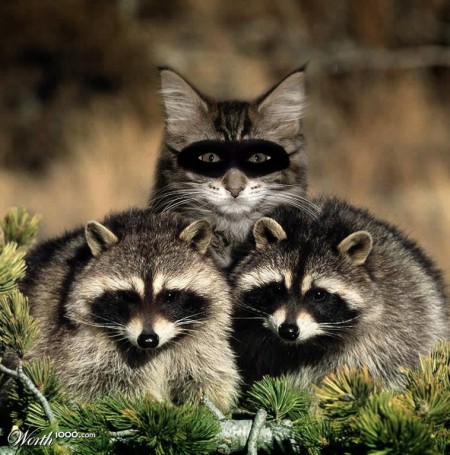 Despite being mad as a hatter, and a lawyer to boot, you (hopefully!) would not think that Ms Raccoon, Ian Brady, Derry Irvine, and Phil Woolas had anything in common, but we do. We do. I wonder if you can guess what it is?

The answer is not a bald head. Now, can you guess which of us has the best chance of being restored to our former glorious birthright?

That answer is Phil Woolas to save you scratching your own head in bewilderment for too long.

You see, unlike the estimated 150,000 people who had, in the previous five years been entitled to reside in the British Isles, for a variety of reasons – like being a citizen of Botswana for instance, and had thus been able to register for a postal vote – none of us are entitled to have any say in who our MP is, nor any representation in parliament.

Ian Brady lost his vote by being both a prisoner and effectively sanctioned under the Mental Health Act – though there are those who would seek to restore his vote as a serial murderer, a fully fledged member of scoiety, there are no plans to allow the criminally insane, nor merely the legally insane, to vote.

Derry Irvine lost his vote the day he bit down on the golden carrot offered to him by Tony Blair; giving Donald Dewars ex-missus the chance to choose hand printed wallpaper and inflict the Human Rights Act on the rest of the population was apparently worth giving up his vote for.

I committed the crime of following my husband to France, embracing multi-culturalism and free movement of EU citizens in one suitably politically correct swoop – and losing my vote for life. Had I been prepared to lie on the electoral form and say I intended to return within fifteen years, I could have illegally kept a postal vote for those 15 years. Being honest gets you nowhere these days. Curiously, I do still have an MP – I just have no say in who he might be.

Phil Woolas was both a cheat and a liar, and convicted of electoral fraud, which only cost him his vote for a mere five years…

The fundamental rights of EU citizens to move freely within the EU was never intended to be subject to restrictions or penalties, as the Court of Justice of the EU has consistently pointed out:

If a country places restrictions or penalties on its own citizens who wish to avail themselves of these basic rights, it is guilty of discriminating against its own citizens to the benefit of citizens of other EU Member States, whose free movement to other countries is not penalised.

Last week Lord Wills tabled a debate on government policy on electoral registration, in which he claimed millions of people could be denied their democratic right to vote as a result of the changes. He was talking about the estimated 6 million people who declined to register their right to vote (mainly an historic effect of the poll tax – if you weren’t on the electoral register you didn’t get a tax bill), some merely ‘don’t want to be easily traceable’ for various nefarious reasons as well as some sound reasons.

He seemed remarkably unconcerned about the estimated 5.6 million who live abroad, a high proportion in EU countries, who have effectively been disenfranchised. It was left to Lord Lexden to compare Britain’s “unjust” policy on expat voting to other democratic nations such as the US or France, where citizens are granted lifelong voting rights, he said that “no other leading democracy takes as restrictive an approach as our country” and that it was “high time the United Kingdom joined the international consensus”.

As ex-pats, we are used to hearing the popular jibe in the main stream media that ‘those living in warmer countries shouldn’t get the winter heating allowance’ – most of us don’t, you only get it if you were ‘in receipt of it’ before leaving Britain; and since when was winter temperatures of -12 as a norm ‘living in a warmer country’? It may be warmer in the summer, as it is in Britain, but we pay a price for those clear blue skies in the winter – there’s no cloud cover to protect us from the deep frost! We live with it, and put another log on the fire.

We are used to the jibes about ex-pats apparently living the ‘life of Riley’ on Disability Living Allowances that are never checked – only if you were in receipt of such an allowance when leaving Britain; if your circumstances change after you move, you are on your own Pal.

The vast majority of ex-pats get just their basic pension if retired, or pay full taxation if in work, to the country of their residence. Some of us have the misfortune to be paying tax in both countries, in France as a French resident, and in Britain as a person in receipt of a Government pension. (Bog basic variety, less than £5,000 a year since you are interested!)Let us not forget those ex-pats who went to live in Australia or Canada to maintain contact with their children – they lost the right to any increase in the pension whatsoever – frozen on the day they left.

As a community, we are saving our country of birth a small fortune by living outside of the country and not consuming any resources whilst still contributing to the national handbag – I really resent finding myself bracketed with such charmless bedfellows as Brady, Irving and Woolas in being considered ‘unfit’ to vote. It is even more of an insult that Woolas will be given his vote back for the next election!

Take a moment or two and and your voice to the poll on this site. It might help!

The price of having a lifelong vote in the US is to be a lifelong taxpayer
to the US, regardless of where one legally resides or where one earns one’s
income. I’d happy give up my American vote if it meant I could also give up my
tax responsibility to the US. Especially as voting is simply participating in
the choice of who gets to spend the taxes I pay.

The British government, by disenfranchising you because you are
non-resident, is implicitly making the case that voting is for people who
reside in Britain and pay taxes there. Which leads us to…

I get some really good benefits from filling in a French Tax Form, but only
because my basic British State Pension is so awful that I don’t have to pay
Tax anywhere.
Britain can have my vote. I stopped voting long before I came
here, so I see no point in arguing for the right to something I don’t want,
especially since most MPs claim more in expenses than I get to live on, and I
refuse to encourage this in any way whatsoever.

The Dutch bless their hearts, permit me to vote in all elections *except*
national ones. So when it gets to choosing the so-and-so’s who actually tax
me, I can’t. It’s a peculiar form of semi-enfrachisement. “No taxation without
representation!” Now, where have I heard that before, and what did it lead to?
As for voting in the UK? Well, you can’t blame me for the mess there. I’ve
been here among the cloggies for 30+ years

While the Germans eat Wurst und Kartoffel
And the French all sit
guzzling offal,
The Dutch -I’ve a hunch
Might say ROLF¹ after
lunch
When in fact what they’re meaning is ROFL!

___
¹ For which I should have thanked you at the time!

Dear Anna,
there is a flaw in your comparison with the stupid rebellious
colonials in Maine and Pennsylvania. We do not levy tax on the non-UK incomes
of those who have left the UK
As to winter fuel allowance – I and my wife
collect scrap wood that would otherwise have gone to landfill and I keep
myself warm by sawing it up to fit our wood-burning stove

Not true – anyone with any property or investment in UK is liable for
capital gains tax…………I’d guess a large proprtion of expats are affected.

So you see, and expat could easily make a contribution to the UK
exchequer that exceeds the egregious Romanian street swindler, the Somali
drug dealer, Bangladeshi benefits cheat and Iraqi preacher of hatred……….all
of whom live in UK, have the vote and are massive NET TAKERS from
society.

Anna, nice picture of you & Mr. G, so is that Gloria’s pussy at the
back?

In Scotland the referendum wrangling is proving quite entertaining. The
combined incompetence of Liebour, Fib Dems & Cons are creating a new
political farce regarding who should vote in a referendum on independence.

Salmond & co have been planning tactics daily for decades while the
Unionists have been simply using blocking tactics. The Scottish list vote
system was designed to make it mathematically impossible to ever get a SNP
majority and therefore the referendum motion would never pass…but it
happened.

So who should get the vote? Everyone agrees anyone resident in Scotland who
is entitled to vote in automatically but what about:

Scots working/studying in England? In EU? Overseas? Born in Scotland living
in England?

The sum total of these groups could be over a million voters.

Salmond has suggesting offering the vote to 16/17 year olds causing the
unionists to berate this on the basis they are”too immature”. Now this maybe
true but who will today’s 16/17 tear olds consider voting for in 2 years time
when they are old enough to vote anyway. (tactics)

Unionists want to give all of UK a vote. This is equivalent to letting all
of EU voting on whether UK can leave EU.

Some of the best arguments for independence from a large political union
come from Tories in Westminster.

The BBC will be decisive & divisive players filling the airwaves with
plummy mouthed Public School boys from London arguing Scots are too small, too
stupid, too poor to run a wee country & that we are so indebted with
subsidies we would never survive thus it’s a 300 year old failure or a lie.

Big Eck will simply select topics on which the 3 unionist parties disagree
and let them destroy their own political integrity. They will fight like 3
Ferrets in a sack.

It will at the very least be a dirty & entertaining fight.

A pox on all their houses.

At least the Upside is………….. we can’t blame you for the political mess this
country’s in.

Would also solve the current wrangle with who can vote in the Scottish
Referendum.

Or I should say would have.