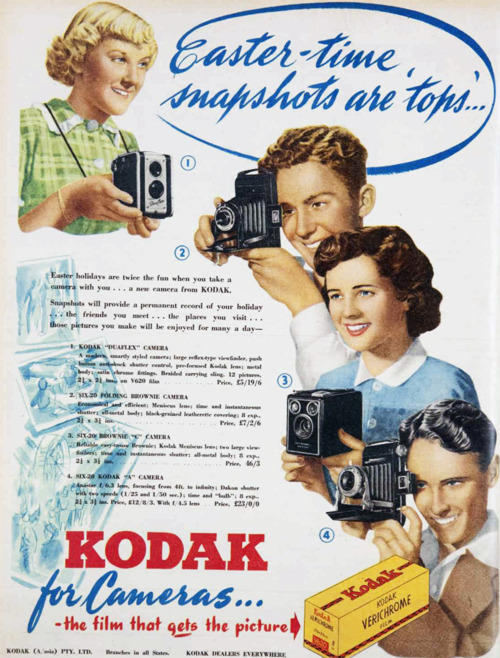 I wonder how Steve Sasson is feeling on this gloomy morning for Kodak? I’ve just unearthed a 2007 article he wrote for Kodak’s internal blog entitled ‘We had no idea’. What prescience Steve!

We love what we do, and we want to share our expertise about digital imaging’s technologies and its power to influence our world.

5 years later, and the digital camera he helped to invent has been the death of probably the most famous name in photography. When the Box Brownie first emerged in the 1890s, it came accompanied by the slogan ‘You Press the Button, We do the rest’; a recognition by the company that they were only selling you the means to take a picture – you still needed them on an ongoing basis. You still had to buy film, you had to return the film to the company to be developed. Kodak were purveyors of the means of turning that button press into a picture that you could see – you had merely bought the button! The invention of the digital camera wiped out a captive class of regular customers.

Kodak’s mistake was in seeing themselves as camera retailers, and forgetting that this was only a minor part of their income.

It is exactly the same rabbit hole that the Dead Tree Press have been driving themselves down since the Internet began. The media imagine that they are in the business of purveying news. They aren’t. News is merely gossip – the stuff of ‘have you heard’, that has been passed from man to man, hill top to hill top, ship to ship, since time immemorial. They are actually glorified advertising agencies, providing the paper communication between buyers and sellers, something E-Bay does spectacularly well.

If they had woken up to that fact in the early days of the Internet, they might have reformed themselves into sensible companies using their expertise at directing advertisers towards likely groups of customers, instead of the present gloomy spectacle of partisan repetition of what is already available on Twitter and Youtube 24 hours later.

The coverage of the Costa Concordia disaster has been a prime example. The graphic coverage is courtesy of those passengers who, fearing for their lives, queuing for the lifeboats, still whipped out their mobile phones to take video coverage on the off chance that they might survive and make a fortune on Youtube, Twitter speculation as to ‘who should hang’ for the accident, and Facebook coverage of leaked transcripts of semi-official interviews. The Dead Tree Press have had nothing of interest to add to what had been available on social media hours earlier.

Why would we want to buy a paper version of selected advertising when we can Google the item we need and go straight to an advertisement – and probably an on-line shop – in an instant?

I note that The Times is now so desperate to get it’s advertiser’s copy into your home that they are promising to push it through your front door ‘before 7am’ via a ‘liveried van’ no less – free of charge, if you would just be kind enough to buy a subscription towards the cost of printing those adverts…….

Any other businesses you can identify as having a mistaken view as to their function? (other than HMG of course!!!)

Kodak is similar to the position in which the mechanical watch industry
found itself as the Japanese digital watch wiped it out in a few short years.
It has only survived now as a niche, outrageously overpriced, poseur product
for footballers while anyone who just wants to tell the time uses one of the
many cheap and accurate digital devices now available.

Kodak’s mistake was in thinking people wanted ‘cameras and film’, whereas
in fact they only wanted ‘images’. Just like electric drills – no-one ever
really wants an electric drill, they actually want holes, the drill is merely
the most convenient means available to achieve that need. When folk wanted
‘images’, then for 100 years Kodak’s camera & film configuration delivered
it, but only until something more convenient came along, when Joe Public
revealed that they didn’t really want film, they just wanted images. Sadly
Kodak didn’t realise what their customers really wanted, they were too busy
concentrating on what they had to sell to them, hence the receiver
beckons.

Good analysis. If Kodak had understood what customers wanted, they could
have been at the forefront of the digital revolution. Receivership wasn’t a
foregone conclusion.

The internet is changing the face of shopping, the music and film
industries and no doubt many other things. The US congress is about to try and
change some of that with Chinese style internet censorship legislation. It
seems the internet was also allowing too much democracy to creep into places
where there is none and where there is democracy exposing the fact that it is
not democratic enough. World leaders are not happy and will do everything they
can to mute the picture that the internet gives the individual as it exposes
too much of their failings. Watch this space as I predict soon you will not be
allowed to surf the net where you want to go but where officialdom want’s you
to go.

I am not so sure Kodak mistook their function so much as failed to
understand the basic tenet of life – adapt or die. Kodak is often used in
business circles as the perfect case of a failure of management vision. They
invented a prototype and registered the patent in 1975 – way before the idea
of homes having even one ‘personal computer’ let alone many. Mobile
telephones? Don’t be ridiculous.
But what Kodak failed to do was review
their patents as technology developed. They did not think Moores Law applied
to them, they did not see opportunities in the development of PC’s. They
failed to appreciate that every business has to adapt from it’s original
format and they failed to see the development of digital as an opportunity –
they just saw it as a threat. Instead of jumping whole-heartedly and getting
ahead of the pack, they dug a hole and had to be gragged kicking and screaming
into the backside of the digital revolution. Instead of re-inventing
themselves they developed printers and paper for printers while others
galloped over the hill.
The reason Kodak is discussed so much in business
circles is that it is an example of how senior management mindset can doom a
company long before the actual agent of that doom (in this case the digital
camera) appears.
As for the Press versus Blogs and Internet – I am
extremely sceptical of anything I read from a purely internet source. At it’s
best the internet puts information in the hands of the people to take action
on. The flipside of this is, if that information is inaccurate, it creates a
mob, it re-writes history, fact is lost and myth takes over. The internet is
frequently inaccurate and easily manipulated. A petty example of this is Mr
Hari of the Independent and a few authors rubbishing their rivals books via
fake reviews. If a government ever gets clever about this, you have 1984 in
pixles rather than ink. So I hope the press adapts and survives because I
think they are on the whole more professional about their fact-checking and
writing.

Can you refer me to a professional press publication please?

Take the Iraq war. Overwhelming evidence was in the public domain that no
WMD’s existed, the evidence was even publicly verified by Mossad. Yet the
press never questioned statements made by MP’s about WMD’s. To be fair the
BBC did mention the report once during a program at 3am

Or how about the recent debate over the alcohol figures. The press have
been blindly reprinting the figures, bloggers have been researching the
figures and (rightfully) calling it as BS.

The Guardian recently had a piece about how difficult it was for poor
little journalists to understand basic GCSE maths. Yet they bleat on about
how important the free press is for democracy; but never sanction
journalists for very basic factual failures.

Or how about this blog and the excellent articles about the court of
protection? The press kept away from that story for a long time.

The press, in its current form, is dysfunctional which becomes obvious to
anyone with basic critical thinking skills and a web browser.

Increasingly the press are being viewed as part of the “establishment”
because they cannot be trusted to simply report the unbiased truth. This has
created an “information” vacuum which has been mostly filled with websites
publishing disinformation and down right lies.

Post internet the press can only survive by starting to care more about
the facts than churning out mindless copy.

(BTW. Governments are already clever about this read about the HBGary
Federal case. They were developing astroturfing software for the US Gov to
manipulate public opinion on controversial issues.)

It gets great comments, and some dross, from readers all over the
world, some of whom appear very knowledgable. It seems to be read by a lot
of the more intelligent members of the population. They get corrected.

It is in a small magazine format making it easy to read on a train a
plane or in a bath.

Try that for a few weeks. I did and I buy a 3 year sub now. Think I
have been reading it for over 10 years.

One thing to be fair to the dead tree press in general, they get a few
things wrong but the cost of accurately checking every fact is immense.
The commentating classes are not paid, so its a kind of crowdsourcing that
is going on when thousands of readers are checking your facts. It would be
unreasonable to expect a journalist, who has to write copy every day, to
completely fact check their every piece of work.

A true journalist is about reporting the truth where research and
fact checking are a basic job requirement. The press regularly fail this
very basic point. And its not hard as so much information is available
online publicly & privately (pay walls).

I’m not talking fact checking climate change here. I’m talking fact
checking the very basics like the number of road deaths. I don’t work in
the press but if I produced a report with such poor fact checking I’d be
expecting a boot flying in my direction.

Churning out low quality copy is the problem; and the internet has
proven to be very good at that. I love the internet, but there is a lot
of crude out there.

Its simple to point an RSS reader to numerous blogs/sites and create
your own “newspaper” equal in quality to the current newspaper
offerings. And there are other news aggregation sources not just RSS. So
why bother with a newspaper?

If the news media is going to survive it has to provide high quality
copy significantly better than the average internet site. And go beyond
levels of research than can be provided by a simple Google.