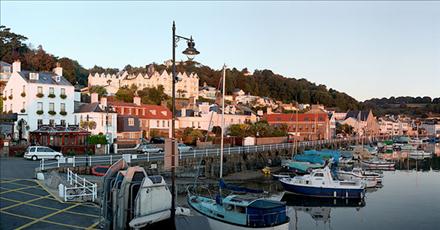 Ms Raccoon is amongst you once more â and has enjoyed a perfectly splendid time in Jersey.

Arriving on the late night ferry from St Malo, tired and dishevelled, disorientated, driving on the wrong side of the road, amongst people who spoke a strange language, I discovered that the excellent B & B whence I had previously resided was bally well closed. A neon glow in the West appeared to be the only sign of human habitation. Applying myself to the door of said hostelry I demanded a bed for the night â they quoted me a quite ridiculous figure that the advertising on this site couldnât possibly support. I quickly calculated a figure slightly lower than the modest sum the firmly closed B & B would have charged me for the week and grandly informed them that there was no possibility of me parting with anything in excess of that sum.  They agreed to host me for said pittance, a little too quickly I thought, and it was with some trepidation that we mounted the dimly lit stairs to what we hoped was at least a horizontal surface â we could always book out in the morning.

I explain that for I would not want you to think that you provided me with the means to lay my head in the bridal suite of what proved to be one of the best hotels on the island. Utterly fantastic. What I believe they call a âboutique hotelâ, by which I mean that they had dispensed with the candlewick bedspreads, and replaced them with hand stitched  (by some Chinese peasant) gold and brown satin coverlets; they had further appeared to cover the walls with the remnants of someones suede coat. I jest. It was a fabulous room, with a superb view over the harbour at St Aubins. The next morning we explored further and discovered our temporary home boasted three excellent restaurants, a proper bar, all beams and granite walls â and a collection of staff that could not have been improved upon.

We have wanted for nothing, waited on hand and foot, fed the finest food, and yes, they did keep to the deal I had so truculently struck with them! Just goes to show that cheek does pay off â we had managed to catch them between an exceptionally busy Christmas and an equally busy late January. The weather has been wonderful â and yes, there was free wi-fi available, and I did have my iPad with me â but be fair, under the circumstances, would you have given you lot a second thought? No matter, I didnât.

I have been in seventh heaven, just listening to bar room banter, munching my way through a full English breakfast every morning, bacon, sausages, everything, (there is a God); strolling round the harbour to buy the English papers on the same day they are published, all manner of luxuries. I do recommend it if you have reason to visit Jersey, everything about the Old Court House is quintessentially âEnglishâ â though they would probably be offended by that description â but for an ex-patriot who had decided to award herself a week in Jersey to celebrate having survived six months of the French health system, it was totally perfect.

Tomorrow I shall get my head around Moribund Milliband and Calamity Cameron, but after a long drive back to the Dordogne, I am going to lay my head on my infinitely inferior pillow and imagine that I can hear the tide coming in again and releasing the million pound yachts from their sandy mooringsâ¦.

An unashamed plug â they deserve it!

Welcome back Anna. Glad to hear you enjoyed your hols.

I am delighted! And the daily full English sounds a really good sign! I
could do with it. Did my very best with the Neary issue by the wayâ¦
Rest
well and well done Mr G too
G the M

Welcome back! I can see why you didnât want to leave.

Iâve stayed in those Formule 1 budget hostels in France but Iâve never
really known how to classify their particular brand of welcome before, what
with the shared bogs and shared showers to vie for in the morning.

Now Iâm wondering whether the doorway âshall-I-shanât Iâ race for the lav
between Gallic trucker with his towel round his waist and Glo with her tiny
towel not even nearly meeting around her embonpoint might just qualify the
place to fall under the description of âPeek-a-Boo-tique Hotelâ?

No? I thought not.

Iâll get me dressing gownâ¦â¦

Nice one, Gloria! If I may be so boldâ¦

In a hotel with only one star
A shared bathroom provokes a
fracas,
But I know Iâm alright;
Iâll put truckers to flight
With a
flash of me âje-ne-sais-quoiâ.

In the dash for the shared W.C.
Itâs a contest between him and
me:
Both of us holding back,
Peering through the doorâs
crack,
And both of us desperate to wee!

âTis I that gets first to the loo
To do what a Mo-Glo must
do
And, tinkling with glee,
I ponder if he
Will still be there
when I want my pooâ¦

I believe that your je ne sais quoi
May be more of a chatte than a
chat:
Be that as it may,
If le routier is gay
Heâll say: merci
mais je nâen veux pas

where the emoticon for ROLF?

I know â Mickâs one is brilliant, isnât it?

Anna dear itâs good to have you back, but PLEASE donât call yourself an
ex-patriot again. I hate that spelling error! I was an expatriate for 20
years, but remained a patriot throughout. From the nostalgia in your post (not
to mention your heartfelt affection for the âfull Englishâ) I am pretty sure
thatâs true of you as well.

Welcome back, our re-charged Anna.

Welcome back Anna! Missed you, I did. x

Were you allowed to smoke anywhere? I lived in Jersey for a couple of years
in the 1960s and have fond memories. I have always been a bit afraid to go
back in case it had all changed and spoiled them, but maybe I will think
again.

It sounds heavenly! And welcome back.

Good to âseeâ you again, Anna.

Welcome back (to the EU). Jersey sounds great. I havenât been there since
1956, via a noisy plane with propellors from Croydon, now Gatwick, airport.
But if Jersey (& the other CIs?) have wisely stayed out of the EU and have
prospered, why canât we too?

Iâm so glad you had a good break and I hope you continue to benefit from
it. No more rumours of tumours, please ;o)