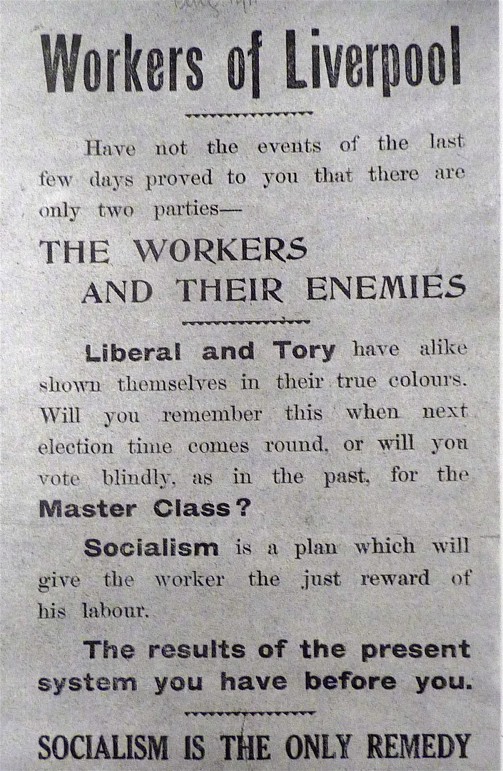 The spectre of Margaret Thatcher has been waved before the hissing, booing legion of the unemployed in Liverpool this morning and the response was as predictable as that of a pantomime crowd.

‘Hurrah’ they chanted, ‘Find me a BBC researcher who wants a talking head for the early morning news’, and the BBC duly responded, seeking out Delroy Burroughs. ‘Delroy who’, you ask?

Delroy Burroughs, Community Leader of this parish (Toxteth) and possibly the Community Leader with the lowest conceivable profile. Not one mention of him on Google. Not one. Not that this bothered the BBC. They had a nice little clip of our Delboy, expert on all matters Toxteth, saying that ‘this report exonerated his community’. Exonerated them from what? Apparently exonerated them from any culpability in the 1981 riots – ‘it proved that they had no choice’.

If you were watching the early morning North-West edition of the BBC this morning, that could have been the end of the matter for you. Delroy had spoken, your very own Community Leader, and it was all Margaret Thatchers fault.

The BBC didn’t care to point out that ‘abandoning Liverpool’ was the advice given to Margaret Thatcher – not her wish or opinion. Nor did they want you to pay attention to the fact that she didn’t take that advice, instead she put £15 million of taxpayers money into rebuilding the community, indeed it was the only community that was given money at the time – but who’s bothered about the finer details? The entire ‘community’ in Liverpool is apparently cheerfully convinced that everything is Margaret Thatcher’s fault – or The Sun’s – ‘This is the Self-Victimisation Society’ sung to the tune of the Italian Job is their anthem.

I do get angry about this portrayal of Liverpool. It was a fine city – and generations of Liverpudlians have displayed initiative and ingenuity in their desire to make their mark on the world. Liverpool was an early example of Marxist ideology come to roost; it was portrayed with great marketing as a city comprised of nothing but dockers. Dockers who had been put out of work by Margaret Thatcher and the containerisation of the ports.

Sure, there were 20,000 of them once upon a time. They would do well to remember the post war wrangles over the future of the Albert Docks. Political infighting resulted in no money being available to compensate the ‘Private owners’ of the Albert Docks. Money was only to go to the ‘poor’ of the city. Hence war time damage to the docks was never repaired. I’m sure I remember a scheme being mooted to fill the Docks in as landfill! Eventually the Albert silted up and the large ships could no longer get into port.

Meanwhile the dockers were portrayed as preyed upon by unscrupulous employers, forced to beg for work – not surprising really when there was no longer work for 20,000 men. It apparently didn’t occur to the 20,000 to turn their hand to something else – as had many others amongst the half million Scousers who were gainfully employed. The Docks went into decline with the advent of containerisation which started in the early 1970s – Thatcher didn’t come to power until ’79!

The Ford Motor Company built the Hunts Cross works in the 1960s – by  the time Tata took it over, automation had dwindled the work force from 8,000 people to 2,000. Add these to the dockers and you have 26,000 voices, all militant, all happy to blame Margaret Thatcher. It has become embedded in mythology.

Now Thatcher is to be blamed for the Toxteth riots – copycat riots which occurred a full three months after the original Brixton riots, on the grounds that (she failed) to take advice to leave them to it, and chose instead to rebuild Toxteth after the lemons had torched every facility they had. Allegedly because 20 years beforehand dockers had been forced to find something else to do with their idle bodies. Can the women do nothing right?

The BBC is perpetuating a myth that is seriously derogatory to the people of Liverpool. Liverpool University churns out Doctors and Engineers by the hundred every year – a quarter of them elect to stay in Liverpool and make or find employment for themselves. John Lennon Airport is the fastest growing airport in the world, handing a serious tonnage of goods arriving from the far east. The Albert Docks have been rebuilt and are a major tourist attraction.There are many, many people in Liverpool with every reason to feel proud of their city and their lives – it’s about time the BBC recognised that Toxteth is but one part of the city, and its inhabitants – and the Dockers – are just a very small part of a great place.

I believe that part of the advice given to Thatcher was that any investment
(reward for riot) in Liverpool would be money down the drain? Ladies and
Gentlemen, I give you… The Liverpool Festival Gardens

Nobody should be surprised that the authors of that poster are very
confused.

Addressed to the “Workers of Liverpool” it is debatable how large an
audience that is, but continuing it asserts there are but two parties, by
which we assume they mean political parties-The “workers” and “their
enemies”-Hmmmm.

It then continues to describe the presumed parties, if they are
chronologically correct then I assume that the “Liberal and Tory” parties are
the workers-I have no complaint with that description, but the “Socialism”
party, presumably Liebour appears to be their enemy. Although confused, I
would once again agree with their assertion Liebour is the enemy of the
working man/woman. However continuing on, the poster asserts that “Socialism
is the only remedy”

So the poster seems to declaim that supporting your enemy is the remedy.
Perhaps this explains a lot about Liverpool.

Any other interpretations are welcome.

A Scouser’s capacity for self-pity and irresistible inclination to
apportion blame away from himself is one of nature’s fundamental forces.

What do you call a scouse in a semi detached house? a burglar

Mersey Docks & Harbour Board – and liddle lambs eat ivy/a kid’ll eat
ivy too. Isn’t that bit of graffiti on a sign proof of Scouse intelligence,
humour and wit?

Born fifth generation Scotland Road, I was carried away when Dad needed
work and it was somewhere else, but we left a large family behind. By the late
1960′s his and my generation had families for whom the jobs were not there in
the docks and related activities because our numbers had increased in each
generation and the number of jobs hadn’t. Worse, the way Liverpool had been
run had discouraged many firms from coming in and others from staying. Too few
realised or accepted that there were radical economic changes under way
regardless of politicians and Westminster.

The people of Liverpool are the architects of their collective demise.
Always quick to complain, always first to demand their rights, and always the
last to acknowledge their own flaws.

If I wanted to build a new research facility, a new manufacturing plant, or
a new admin centre, Liverpool is the last place in the UK I’d choose. And many
in business would share that view.

Do I know what I’m talking about? Yes – half my family live there (the
other half were smart enough to get out years ago).

You may say that but it’s just as well for those employed in a growing
business that Tata Industries didn’t feel the same way??

James, you really are a sad excuse for a person if you think we are all
like that – I am proud to have 3 sons & 9 grand-children and they all
are proud of their Liverpool roots.

Thank you Anna for a nice piece – pity the original intent was
missed.

Best Wishes to all where-ever you are for the New Year.
Brian

What do you call a Scouser in a suit?— the accused!

“The entire ‘community’ in Liverpool is apparently cheerfully convinced
that everything is Margaret Thatcher’s fault – or The Sun’s – ‘This is the
Self-Victimisation Society’ sung to the tune of the Italian Job is their
anthem.”

They seem to be only four or five steps ahead of the rest of our society in
that ..

Seems about right!
A scouse walks into a gay bar , and a bloke goes up
to him and asks him if he wants a ” Blow Job”— the scouser gives the bloke a
terrible beating– kicking and punching him repeatedly. The landlord walks
over and ask ” Whats all this about?”– the scouser replies he asks me if I
wanted a job!

I used to take goods by truck to Liverpool docks, your heart would sink as
they would keep you there for hours on end, indeed days on end in some cases,
bone idle time wasting that cost everyone…they took the piss and it cost them
their jobs, and they wonder why it ended.

Led by idiots into the toilet.

you’re not joking mate, I used to go with my dad in his lorry sometimes,
apart from the waiting I saw him offered all kinds of stuff”off the back of
a freighter” so to speak, no wonder they brought in containers not just
Liverpool either no surprise major gangsters/ communists controlled dockers
unions for years

The last time ‘large’ ships go into the Albert Dock was when it was
built which is about 200 years ago…….

For what it’s worth, my mum went to Liverpool this Christmas and had a
great time.

Please don’t forget the mess that the Union infighting caused in Liverpool.
It really isn’t a myth about the rows over demarcation and the downing of
tools at the drop of a hat on the docks. At Cammell Laird, there really was a
strike over a dispute about who ‘twanged’ the chalked string that marked the
lines for the templates on the sheets of steel. This ridiculous farce between
two different unions was part of the decline in our shipping industry. The
unions take a large responsibility for the death of manufacturing in this
country. We’ve now got Bob Crow trying to do the same for our transport. A
£500 bonus just for doing your job. Jeez. If you don’t learn from history,
you’re doomed to repeat it.