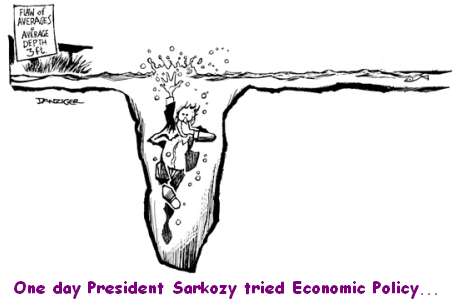 For the last couple of days President Sarkozy has been looking slightly like a 1.65 metre man standing at the bottom of a 1.75 metre puddle having a rhetorical go at the old enemy, but blowing a lot of bubbles instead.

I want to suggest that, rather than responding with scorn, amusement or hostility, we should try compassion, and I have a suggestion.

Mr Sarkozyâs problem is that the markets donât trust France to repay its debts as much as previously, so the interest rates have gone up â¦ and up and up.

And the interest rates which the French Government have to pay have become much higher than those required of the UK.

The Chancellor of the Exchequer Mr Osborne has a scheme to help small businesses borrow money at more competitive rates:

The biggest new policy is a Â£40bn âcredit easingâ scheme to make it simpler to underwrite bank loans to small firms.

Small businesses with an annual turnover of less than Â£50m qualify for the scheme.

Mr Osborne says it will cut the average interest rate for those firms by 1%.

Is it too much to suggest that this scheme be extended to the help of France, and the UK use our greater creditworthiness to borrow money to lend on to France, at a modest additional margin, thereby helping both countries?

Perhaps we could split the difference, and lend to France at 2.5%.

What say you, Mr Sarkozy?

Iâm sure someone will come up with a good reason why we shouldnât do it, but just this once â¦?

George Monbiotâs article on todays Guardian website is probably worth a
read and a response. Link below:

Arenât we supposed to be sharing aircraft carriers with these
characters?

Thats so yesterday, tomorrow you will be sharing sovereign debt when the
IMF bailouts commence.

Presumably this is whatâs behind the latest spin about Germany wanting
to build bridges with Britain?
A latter day Berlin airlift perhaps,
bringing bailout assistance not potatoes.
Will our esteemed leaders be
falling over themselves to throw money at the euro? Weâve already heard:
âthe IMF usually gets itâs money backâ, and âthe success of the euro is
vital to all of usâ
Still looks like the financial equivalent of group
bungee jumping at Vesuvius to me.

â looks like the financial equivalent of group bungee jumping at
Vesuviusâ â¦â¦â¦..Indeed, and everybody who leaves their money in European
banks risk getting their savings incinerated, everybody else gets third
degree burns and consider themselves lucky.

The FCO are actively planning for capital controls and bank failures
in Spain and Portugal, some of Franceâs, Germanyâs and Englandâs banks
would become insolvent in that scenario (if there arenât already). Plan
accordingly.

You have no say with IMF actions, you (and I) will contribute and
then will hope like hell that the loan is repaid (probably in severely
devalued âcurrencyâ)

I fully expect that we will all be billionaires in several years
time-and we are gonna hate it.

Iâd like to assume that the establishment in France has about as much
connection to real people as ours has. On that basis I sympathise with the
citizens.

And does anyone think there would be a remote possibility of actually
getting paid back?

Sod them. They are actively trying to sabotage the British economy, I hope
they rot.

Alas, the Plantagenet arms originated in the arms of Anjou and for a long
while our Kings were more French than English. Indeed the Fleur de Lis were
usually quartered in the 1st rather than the three lions. With one or two
breaks, notably King Richard II this continued to the early 18th Century. I am
not sure I want to be more French than English.

Hmmmm, governments loaning money to other governments, while raking a bit
off the top, what could possibly go wrong?

Perhaps I have indulged a little too much at the Raccoon Arms this evening,
but I say my compatriots are generous fellows, so allow me to propose the
quintessential British âwhip-roundâ for a colleague that is temporarily
financially embarrased.

I will start it off by depositing these five crisp Zimbabwe
100,000,000,000,000 dollar notes in the beer mug, http://zimbabwedollars.net/p/zimbabwe-100-trillion-dollar-banknote
too
generous you say? pah nonsense, itâs the least I can do for such a faithful
and uncomplaining friend, now step forward donât be shy, you know that our
colleague deserves your charity especially at this time of the year.

Fair warning -anybody showing off by depositing a 1938 sixpenny bit will be
ostracized as a show off, such public displays of wealth will not be
tolerated.

Worth considering as soon as the provisions of the Treaty of Troyes are
restored.

Save the French surrender monkeys from the Germans again? This is getting
to be a bit of a habit!

Why not? Well â er â isnât the annual turnover of France a tad bigger than
Â£50m?

Q. What is the capital of France?

(The old ones are the best, arenât they!)

And I always thought the capital of France was âFâ.

No need to lend France any money â we already donate vast amounts just to
sponsor the CAP for the sake of their poisoned dwarf, their inefficient
agriculture and obsolete inheritance laws.

It might be the bottle of Pouilly Fuisse thatâs tormenting and deceiving my
mind, but the labels on the graphâs axis look wrong.

Pay for our own servitude to the EU? France and Germanyâs dream is to rule
Europe and ruin Britain.

You must be a Liberal Democrat.

The quicker the project explodes, the better.

It is Sarkozy and the FEDJ Tussis dream. NOT that of France and
Germany.

Basically we could not GIVE a shit about Britain.

Helping smeâs in France is a wasted as the French true to their Anglo-Saxon
economic model phobia they have regulated and taxed smeâe out of business or
into the black economy.

SO TRUE! And absolutely unbearable for foreign residents. After having
filed and paid 71 tax and social security declarations per year during 9
years, I am CLOSING my French company.

And, YES [see further down]: succession tax goes up to an outrageous 60%
if you donât have kids of your own. I am seriously contemplating to adopt my
nephew

I have tried very hard to talk every single French person around me into
finally starting a 2nd French Revolution, instead of stupidly blocking a
whole country for something as normal as retirement age going up with 2
years. Mind: from 60 to 62 â¦ The Dutch would have been all in the streets
too, but only to rejoice. Theyâll have to work till 66 soon.

Funnily enough â later this week a lot of âtempâ workers will loe their
jobs courtesy of EU regulationâ¦â¦â¦.

â¦â¦â¦.not so good for SMEs eh?

No doubt inspired by French-style socialist labour laws that squat on
the back of any enterprising soul who wants to help himself.

Just like Labour with their education policies i.e. abolishing grammar
schools and bigging-up compsâ¦â¦the French/EU want to drag everyone down to
their pathetic level and make them dependent on the state.

To pay for all this they want to tax everyone to death and distribute
their largesse how they, and only they, see fit.

The EU is nowt but a socialist con trick â get out!!!