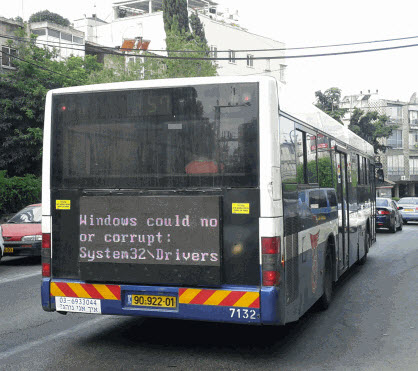 Ignore for the moment that the picture shows that Windows has failed to load on the computer driving the display.

Do you think such an advert is conducive to public safety? If there were complaints about the famous âHello Boys!â WonderBra advert causing a distraction just think what kind of distraction moving adverts on the back of the bus could cause.

There are only 10 types of people in the world: those who understand
binary, and those who donât.

Obviously Microsoft is one of those â10â³â¦

Still I âspose it could be a BSOD.

In the case of an accident it would be dangerous if the Windows failed to
open, possibly trying to Boot the Windows will help if the Driver has failed.
When Windows fail to open it is often caused by poor maintenance and a lack of
Cache. Will need access to Root to to solve.

One of the wisest pieces of advice that Iâve heard offered to teenagers is
âNever put anything online that you wouldnât be happy to see on the side of a
bus tomorrowâ.

Now that it would actually be feasible, the message might actually get
through to even the least imaginative.

Ah â I recognise this: itâs a standard bus error..

Never mind âmoving displaysâ â Even fixed graphics can be rather, er
âgraphicâ. Look at the position of the exhaust pipe in this shotâ¦
http://i41.tinypic.com/noujcx.jpg

No wonder the one on the right is laughingâ¦..