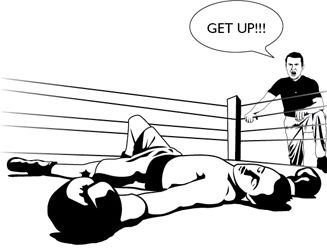 I’ve just become very aware over the past few weeks that less than 10% of my RSS feeds to other blogs have been updated.

Tim Worstall still beavers diligently away at the blogging coal face, as does Subrosa. Guido of course, JuliaM, Leg-Iron, Max Farquar, Witterings from Witney, Dick Puddlecote, but some of biggest names in the political blogosphere have fallen ominously silent.

Some so terminally silent that I have given up hope of their return and stopped following them – others occasionally rouse themselves from their slumber like drunks at a dinner party, to mutter something inconsequential and then fall head first into a blogging stupor once more.

It certainly isn’t that there is nothing of consequence happening in the political sphere – few of us are old enough to have ever experienced such dramatic political changes.

Is it that those who once pushed out such erudite posts every day are now content to tell the world ‘Watched PMQs, crap again’ or pass the odd witty comment on Twitter without elaborating on their thoughts or reasoning?

It cannot be the change of government – both left and right blogosphere appear to be declining with equal rapidity.

Unemployment figures continue to climb – so I can scarcely believe that it that those who once had time on their hands are now gainfully employed.

Is there a blogmonster silently chomping away at the most prolific writers? Consuming the big beasts of the blogging world that once I looked to for inspiration?

I know that inevitably people just splutter to a halt and find themselves repeating old thoughts – but logically there should be new blood entering the field and noisily making demanding attention. Look at any of the blog ranking systems, and all you see is corporate name after corporate name.

The audience hasn’t ‘upped and left’ – my stats continue to climb, no doubt boosted by the fact that better analysts and writers than I are no longer feeding the blogosphere.

Where have all the independent Bloggers gone? Long time passing…

Make yourself known – I am trying to rebuild my RSS feed!

My thanks Anna for the add and to Ed P and Giolla Decair for the
recommendation. I can confirm that no money changed hands.

I’m missing Gildas the Monk – he seems to have been conspicuous by his
absence from these comments for some time – and also appears to have dropped
off the Twittersphere. Anybody know what has become of him? Could he have
taken a Trappist vow..??

He changed his ‘handle’ – think his new identity is ‘Nennius The
Monk’..

Nennius seems to have bitten the dust as well Julia…

I go through peaks and troughs of blogging enthusiasm.

Some of that is not having many readers; but some is just natural. Perhaps
we’ve dropped into a time when a lot of blogger cycles have synchronised?

I only started this year, and I’m still a bit aimless. I don’t have the
connections or knowledge to do politics much beyond the ‘what I think’ level.
It annoys the hell out of me when I see what’s going on but usually someone
better informed gets there before I do. Neither do I have the time to do more
than one or two posts a week. But I do keep trying!

I’m a bit reluctant to push myself into the illustrious ranks of the other
bloggers above but if you were to be good enough to add my blog to your list I
will drag myself out of my current torpor and update it tonight.

Oh, and Rosie… not all of your devoted readers are outside Scotland, but I
still can’t comment on your blog (and others) without some external
registration (Google, OpenID or something similar).

We aim to please…

Ha ha! I did that too Filthy Engineer! However, I agree with Anna. So many
bloggers have become now part of corporates or blogs with multiple authors and
‘independents’ can’t compete. It’s not easy – in fact it’s very hard work – to
produce posts every day. I do it because of my two readers who insist their
lives would be bereft without reading my mumblings. As they don’t live in
Scotland should that tell me something?

Don’t think you have blogrolled mine before, mostly concerns smoking ban
but also the Offensive Behaviour at Football and Threatening Communications
(Scotland) Bill which is going through Stage 3 in Scottish Parliament in the
coming week.

It’s a petty annoyance for me to well. If you want others to follow you,
then please make it easy.

(I had a quick check to make sure you were not referring to me!).

I’ve noticed the same over the last couple of months. I used to get up in
the morning and spend at least two hours being entertained and informed by my
RSS reader. (You’re probably thinking I’m a sad old bugger now). But yes, my
list of readers has become severely curtailed.

Actually, that’s something else that you’ve reminded me about nick, the
number of blogs that have a hidden rss feed button. Right at the bottom of
the page sometimes. Drives me mad sometimes!

I’m still here but due to work changes have not had the luxury of plenty of
time and home office working to comment regularly. Also, when I come home from
the client in the evenings to catchup on what the blogosphere has to say, I
find there’s not much more to add, although I agree with so much, and very
much appreciate all the efforts of Ms Raccoon and the Gang, and of course her
commenters and readers.

But you are right, I must make more of an effort: there’s a seismic shift
going on out there and our job is to maintain the momentum.

Lastly, in the words of Sergeant Phil Esterhaus:

“Hey, let’s be careful out there.”

As a “Gang” member I have to concur with you about work load. With
projects weeks behind schedule and working 10hr days whilst suffering from
mild CFS I’m pretty wacked out in the evenings.

Though unemployment might be up, all that means is that the least
productive people are out of work. The rest are having to work harder.

I’m still blogging, but the number of posts I write is subject to the
amount of bile in my duct (which depends on the amount of governmental
stupidity in the MSM); factored into that is tiredness; it’s currently busy at
my workplace, and sometimes I simply don’t have the oomph to throw out a hasty
post in my lunchbreak – which is where they mostly come from.
But I’m still
feeding the beast, and folks kindly read them, so I’m grateful. And I’m also
glad to see an increase in Anna posts again! Keep it up, lady!

Individual Bloggers are always going to be a transient phenomenon.

Some will have more perseverance than others, but developing multiple ideas
& postings day-in day-out has to be such a time-consuming labour of
love.

As some fall by the wayside (voluntary euthanasia), others surface with
their own take on life & events.

Thank you all.
As an avid reader of many Blogs, I’m grateful for their
endeavours.

Here in Croatia many are just tweeting at the moment. They haven’t posted
anything in months. The truth is the blogosphere lost its significance in our
society 4-5 years ago, so this is probably just an extension to that
process.

Many bloggers ended up living their lives on the Internet, blogging about
everything that happened to them so Twitter has become their new place to be.
I’ll never understand it, but it’s a fact.

If it’s any consolation, the same thing is happening over here in Ireland.
I recently deleted around forty feeds to Irish sites as they hadn’t been
updated in over a year. Some have migrated to Twitter but the rest seem to
have just thrown in the towel.

Grandad – my first thought for a title for this piece was ‘where have all
the bloggers gone’ – then I googled it, just to see if anyone had had a
similar idea – 119,000 returns! It seems to be a worldwide phenomena.

Heh! I see I’m in there and what’s worse, I was asking the question
three years ago.

Young people these days just have no stamina!

the [email protected] haven’t given up yet, I’m pleased to say

though we may be about to become rather unfashionable …

Good – and duly reblogrolled….I don’t know how I ‘lost’ you in the first
place!

Phew. From the title I thought another one was going.

I’m still plugging away here http://quietmanmyblog.blogspot.com/ and here http://4liberty.org.uk/ lot of
big names gone, but there are still a lot of cracking blogs out there up and
coming too.

Duly blog rolled – give us the name f some of these others too!

I have been quiet lately. Thats due to my bail conditions though. Will be
back after the trial. I hope.

Good luck Olly – a damn good excuse and I hope you’ll be back soon.

Thanks for the mention and inclusion, Anna. In my case it is a masochistic
love of hitting my head against a brick wall!

I know the feeling – and besides, I would miss this ‘pub’ probably more
than the customers!

I suspect the rise of Twitter has had some effect.

Might I recommend these (with no personal links or bias)?

Duly added – except John Ward who continues to publish that I no longer
blog and refuses to publish my comment that I do…..I will never understand
ego driven men.

I’d second Misanthrope girl, also of course myself though I’m not that
new and don’t update with spectacular regularity

Damn this predictive texting, I’ll never get to grips with it!

Perhaps the realise how difficult it is to influence the Bit public who
keep voting the way theory parents & their parents also.voted?

My blog does well, in 96 countries, bit I don’t just do politics.

http://patnurseblog.blogspot.com/ Tea and Cigarettes could be
added perhaps?