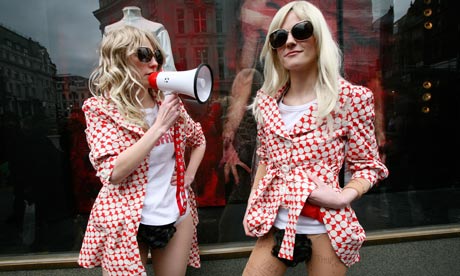 I would dearly love to write fiction â but how can one compete with the truth? The media continue to churn out (reasonably) factual stories that I could not dream up with the help of a gallon of Absintheâ¦

With the Eurozone disintegrating, wars looming in all four corners of the world, the starving on every continent, and the polar bear population increasing â the Guardian today is promoting yet another âdesperate situationâ for the rent-a-protester to attend.

The feministas are congregating in Marylebone demanding âHands off our Muffsâ. No really, I know the idea had never crossed your mind, but just in case, you are being warned off.

It seems that some women are daft enough, and rich enough, to engage Harley street surgeons to practice âvaginal rejuvenation, designer vaginoplasty, G spot amplification and revirginationâ in a desperate attempt to acquire the perfect vagina.

Quite what comprises the perfect vagina, other than âready, willing and ableâ, is not explained.

This of course, couldnât possibly be an example of free will on their part; it is yet another example of women being forced into subjugation by nasty men and thus must be marched against, demonstrated against, campaigned against, by the feminista  Muffia. It is being compared to the genital mutilation forced on young girls by some religious practices. *sighs*.

Surely you have overheard a man in the pub telling his wife on his mobile phone, she had better have her designer vaginoplasty by the time he gets home, or else?

We donât buy the neoliberal rhetoric that insists this issue is not political because women âfreely chooseâ to get procedures like this done. The cosmetic surgery industry ruthlessly stokes womenâs appearance insecurities and mines their bodies to extract maximum profits. Accountability, monitoring, and auditing are not words this industry is used to.

Feminists protesting against a womanâs right to make her own choices?

Having given this topic more thought I shall send my CV to the local
council who are sure to create a job to regulate the appearance of the female
genitalia.

Taxpayers Money used at council for fannying about should be business as
usual.

Just think of the next season of ICGMOOH. New meaning to Bush Tucker Trial
?

Well, Iâm all for a generous welcome mat, but, reallyâ¦

This is simply a natural extension of liberalism. Your body is not yours,
you are not competent to make decisions, therefore the liberal elite will
cajole their friends in government to legislate to ban/compel/tax (delete as
appropriate) it and make your decisions for you.

When I saw the picture I thought they were âsave the rainforestâ
protesters. It looks like they have the Matto Grosso just below their
navels.
The lefties send out the wrong message again.

Historical note â based on a Police career, followed by running a Newsagent
shop.

In the not-so-distant-past it was totally forbidden to show ANY trace of
pubic hair in printed publications in UK (check sp â OK!)

Then there was a âworrying trendâ for depilation. Why âworrying? â because
paedophiles would then be tempted to look at obviously mature ladies and
fantasise (Wonât anyone think of the KIDDIES â oh yes, they do?)

SO â how to establish that each âmodelâ was old enough to be âlegalâ? If
there was any doubt â print a sequence of photos showing her skill with
soap-suds & a razor

Thatâs what I like about this blog â itâs so educational.

However, for the ladies in the picture, may I venture to suggest that a
razor may not be up to the challenge. Perhaps a Flymo might be more
suitable?

Or an electric hedge trimmer.

The girls in the picture remind me that a term to describe dyed blondes was
âairport blondesâ, an oblique reference to Blackbushe Airport near
Camberley.

The young ladies in the picture seem to have developed a new garment to
keep their {deleted} warm in the December chill. I canât see it becoming
fashionable, though.

One wonders if they have used natural fur, or risked the static electricity
side-effects of nylon, which would add a whole new dimension to the phrase
âMakes your hair stand on endâ.

Natural fur? You can almost guarantee they are veganâ¦

One hopes that no Raccoons were harmed in the making of this
protest.

I believe the Beaver population was depilated, but the Raccoons
escaped unscathedâ¦

Are you sure this is natural, or has the beaver suffered a close
shave?

If I remember correctly, we toasted, buttered and ate our muffins by the
fireside, while mum looked on.

Are they all going to carry signs reading âOccupyâ?

Apparently the correct answer was not what you thought, but Africa.

Do you recall the lady handed an ASBO for excessively noisy
copulation ?

Get some Viagra too :  use a combi-amp.

But how do you keep your hands warm if you canât use your muff?
This has
to be some sort of conspiracy by the glove manufacturing industry.

Oh, but darling, the Sudan is just sooo last year!

Just a load of cupid stunts

This in no way can be blamed on men. Never in the history of shagging talk
have I heard a man say he refused a Muff due to shape, symmetrical appearance
or whether it is an âinnieâ or âoutieâ

We are really not the connoisseurs of cunnie that women seem to imagine. We
are usually just pleased to be invited to the field of play.

This is about womens self image, created by womens insecurities by womens
magazines being rejected and protested by the usual bearded ladies of the
left.

It is not the shape of the fanny that matters to men when they steer clear
of the hairy marxist monsters of the guardian but the fact they are man hating
commies who fail to smile, wash & make an effort to attract a mate.

We are really not the connoisseurs of cunnie that women seem to
imagine. We are usually just pleased to be invited to the field of
play.

lol! So true, brother, so trueâ¦

I recall one occasional partner who was always concerned to âprepare
the groundâ before any encounter and was equally concerned that I
recognised her pride in both its structure and appearance. As if I gave a
shit at that momentâ¦â¦ !

What a sexist statement.

Is she blind to the fact *pornographers* also demand grown men remove pubic
hair? [Or so a mate who’s seen some of their movies informs me.]

Pornographers also demand more hair for the niche markets. [Or so I’m
informed]

Having recently acquired OAP status thereâs no pressure from me to pretty
up a pudendum. Keep the bloody thing covered up I say.

How times have changed since families gathered in front of the TV to watch
âMuffin The Muleâ.

I believe youâll find that muffinâ the mule was made illegal under the
Sexual Offences Act (â69).