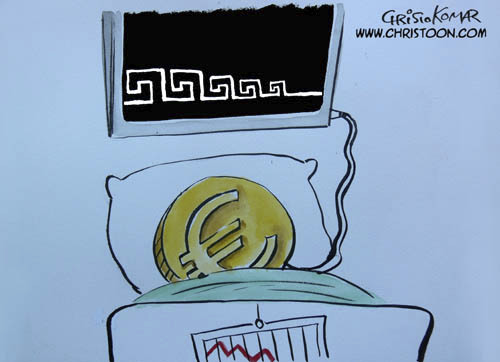 ‘Tories at War’, scream the headlines – naturally they are at war with each other, rather than the enemy at the door. The comments on Conservative Home this morning would be hilarious if the situation wasn’t so serious.

There’s a burglar in the house pointing a gun at them demanding the keys to the safe, and they are furiously arguing as to whose turn it is to do the washing up and what the marriage contract actually said about washing up duties.

UKIP are noisily recruiting on the grounds that they would give you a referendum – before Friday, folks? Do you really think the markets are going to wait that long?

You can nitpick all you want, quote chapter and verse of the Lisbon Treaty – there is even someone who thinks this is the perfect time to renegotiate the Common Fisheries policy, bless ‘em, – blame Edward Heath, Common Purpose, Jewish bankers….they are all out and about in the comments this morning, but the burglar is still pointing a gun at your head, and now you have to make a choice.

Britain is holding at least £180 billion of Greek debt in RBS, Barclays and HSBC – the banks aren’t worth that much! Do you really think the Greeks are going to rush to pay us if we are sitting on the sidelines arguing about how many fish the Spanish can take legally, and not signing up to the Merkel plan? Do you really imagine the Spanish will abide by it when they are starving?

A referendum is a wonderful dream, yes, we should have had one, yes, we’ve been let down, yes, it was someone else’s turn to do the washing up, yes, yes, yes.

Are you going to open the safe, or let the burglar shoot you and take the keys.

Which will it be?

*Ms Raccoon is embracing her inner sloth, and will take a leisurely walk down the garden to harvest something for a vegetable curry tonight. Butternut Squash, Red Chard, and some of those dried Chickpeas I think.

Some of us had the wit to put our assets into a small holding with water, some of us had no faith that the policy wonks would ever cease arguing about the washing up. Some of us think there will be nothing left when this lot combusts…some of us are glad we got a gun to shoot the Coypu or anything else with one eye on our Squash patch.

Jeez what a mess!

So it’s resolved-no referendum, no democracy, Tobin taxes and probably some
convoluted fudge to spread the disaster over a longer period so that it does
not appear so bad. At least a decade of declining quality of life, thats not a
pretty picture for someone sixty or older. Probably some (many) nationalized
banks, some more QE, far less profits from the financial sector so far less
earnings for the pension plans. Pensioners will be hit hard by inflation and
energy costs.

The landlady seems to have a handle on the situation, money in the bank is
a depreciating asset, better to buy a smallholding remote from the city with
fertile soil and a good water supply in a warm climate. A small woodlot would
be useful too. A gun and some ammunition purely to control vermin (vermin come
in all shapes and sizes-use your discretion).

Last one out, shut off the light. There is no point waiting for the
politicians to resolve this.

If I understood correctly today [in between managing life in a country
called France] the Merkel solution will apply to the EURO-zone. So “you” are
not implicated. Good night

A raw nerve this one.
There is no obvious way back from what these fools
have brought about.
I suppose the longer the pain and uncertainty goes on
for the weaker of the euro members, the more likely they are to sign when they
are given the (Merkel) offer they can’t refuse.
We can’t seem to distance
ourselves from this nor influence what happens.

Yes the Elysée Palace palace springs to mind what’s the new one then
?
Yes the historical parallels between 18 th century France and the so
called post democratic era are interesting still there wont be no revolution
till we all start to starve.
February probably ,roughly 50% of our food is
imported and relatively cheap compared to income.
So we grow our own
eh?
Well for most that’s a six months wait is it not.
With the
governments of Europe less likely to get any more credit and raging inflation
and joblessness = Less food ,higher prices ,if that happens then it’s
definitely Bastille day !

“they are furiously arguing as to whose turn it is to do the washing up”
Would that be an all femail shortlist?

The EU (and UK) is starting to have a very Louis XVI feel to it.

Thinking nasty thoughts about the Merckel-Sarkozy love-in you tend to
remember that Southern France had a puppet
regime in the early 40′s. Yes
they had resistance fighters, but a very large number joined Petain’s
organisations like the Milice.
Here in Blighty I can’t see much changing
until the new Tory intake carry out a palace coup and replace Heath’s
reincarnation, Cameron. He’s crafty enough to pose as a eurosceptic and claim
that he’d like to stand up to the EU
but the LibDems won’t let him, but
what’s the betting he’s already got EU agreement for a wellpaid sinecure in
the
future as Commissioner for Unified Non-national Treaties ?

It worries me that the proposed ‘solution’ to the current problems are
being cooked up between two national leaders, with everybody else seemingly on
the sidelines. Democracy, or even any pretence to it, has been totally
abandoned. In the longer term (in this case, maybe only weeks or months) that
must spell trouble.

When I talk to people about the EU situation, I detect a growing
frustration. It’s been a political and economic disaster; better to abandon it
now (in a planned and orderly way) before it does even more damage seems to be
the majority view, but nobody thinks it will be abandoned, and that leads to
the frustration. Nor do they think that a bit of a chit-chat between European
leaders on Friday will sort things out for more than a month or two at
best.

And finally – when do us ordinary plebs get a say in all this? It’s not as
if it will all have no effect on us – quite the contrary. I’m not just being
parochial, either – what does the ordinary German, Greek, Italian, Latvian,
Irish citizen want? And are they getting it? Don’t think so.

Come now, young Engineer, you’re looking in the wrong direction. You’re
not supposed to be worrying about whether we have democracy. Very off
message. You should be fretting about democracy in Syria and whether we
should bomb them into copying the seat of democracy. listen to your Aunty
Beeb.

Global financial integration has allowed everyone to become infected by
financial crisis.

I wonder where the money comes from that the governments borrow. I suspect
the Unit trusts, pension funds and national banks of each nation are turned
into leveraged Bond finance which is then pushed through markets at massive
profits to the institutional investors who in turn siphon off billions in
profits before lending it to Various Countries at higher and higher interest
rates to then filter profits back to ourselves. Unfortunately we the original
owners of the money live in an impoverished country held to ransom by our own
savings controlled by complex market mechanisms.

Simplified: our investments & pensions are skimmed by traders in
financial sector then lend to Governments who charge us tax to pay for the
profits generated and kept by investment controllers of lending ourselves our
money.

An earlier post talked about the cost of welfare tourism and asked …are we
mad… the only way to stop it is to regain control of our borders and the only
way to do that is to leave the EU… Brussels are going to fine us if we do not
pay up on foreigners welfare benefits…….

seems £180BN exposure is a bit high – €2.3Bn suggested by a leading
paper…
http://www.guardian.co.uk/news/datablog/2011/jun/17/greece-debt-crisis-bank-exposed
unless
they’ve being buying lots more debt now that Greece has a wonderful new
government

Thank you, I was going to google that next as I thought the figure was
high.

I have been following the story with interest. Seems to me the crux of
the thing isn’t ROTW/Greece, but the exposure of French and German banks to
Italy and Spain. Germany is widely believed able to cope with the hit on
their banks if Italy/Spain go, but France is not held in such high esteem. I
read t’other day Italy owed France a little over 20% of her GDP . So when
you see Angela and Nico glad handing bear in mind that his is the desperate
hand. He is well and truely not getting elected next year if the thing
collapses.

My understanding of UK exposure is in line with comments from Andrew
and davidb.

Unpleasant, but not unmanageable – and easily / quickly recouped if
traded off against not having EU compliance and CAP costs to bear as well
in future.

When it all collapses which should be pretty damn soon then we will see
this collective love in that the socialists have foisted upon us disintegrate
pretty damn fast as well. Will the socialist be concerned with the elderly and
the disadvantaged then or will they suddenly all become capitalists and be
looking after number one first which funnily has the unintended consequences
of giving an helpful hand to others. The collective love in has the opposite
unintended consequence of disadvantaging others and if practised long enough
end up in a social and economic mess. You may say what has this got to do with
the article. I will say everything in a round about way because the squabbling
that is going on is about blame and preventative action. I blame the left and
the left blame the right both our positions are entrenched I advocate a right
wing solution the left a left wing one. So decrying the squabbling is naive
because unless what is being argued about is resolved then a solution cannot
be forged. Which does not matter really because a right wing solution is too
late to do any good and a left wing one only makes the problem worse. So it is
all going to fail anyway and the consequences are going to be horrendous.
Being right wing and blaming the left I was musing on on left wing hypocrisy
and how it will once again be exposed. Excuse the ramblings of an OAP but I
wonder how I am going to fare when it all collapses in mountains of debt will
I still receive my pensions. Probably not and I do not expect any socialist or
Greens to rush to my rescue.

Well, socialists always look after number one – even when they’re
pretending to help others.

One Two Goose Step Plan To Reclaim The Fatherland.

One Führer One Nation One Currency