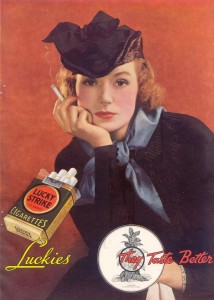 ’40% of cancers caused by lifestyle’ screams the BBC, a story they have been mainlining on all day – illustrated by a large picture of a smoking cigarette….

Now, only 2% of the population each year get cancer in the first place. Too many, I’ll grant you, in an ideal world.

I’d have preferred not to, for sure. As a woman though, and one whose cancer did not originate from smoking, I was fascinated to see that even the Beeb can only attribute 15% of female cancers to smoking.

Let us say women with cancer represent 50% of the cancer riddled population. Or around .06% of the total population…

The anti-smoking lobby make an awful lot of noise considering that you have an 85% chance of your cancer not being caused by smoking.

85% of Female Cancers not caused by smoking? That’ll be the day when the BBC comes out with a headline like that!

I do notice that they do not say WHAT lifestyle “causes” the cancer. If it
is what is deemed “unhealthy”, then surely the 60% living a “healthy”
lifestyle should be the more worried, as they are almost twice as likely to
get cancer!

This was not a scientific study in any acceptable sense of the word. It is
merely hypothesis based on estimate to “raise awareness” The political nature
of this particular piece of depressing garbage is evident from the BBC report.
The BBC of course is completely editorially unbiased and never over emphasizes
junk “science” relating to health and lifestyle. You can be sure that no
matter how dire the publication, the BBC will print it if it is “on
message”

It wouled be nice to know which of the many flavours of cancer you are
talking about.
stomach cancer – basal cell carcinoma – what?

I can only speak for myself but I smoked for 50 years with no problems,
then my husband died suddenly in an accident. For months I was in shock and my
immune system collapsed, I was ill for months and thought I would never be
well again, just one thing after another. Two years later I was diagnosed with
LC, no symptoms, a totally incidental discovery when I had a CT for something
else. This was just about how long my surgeon told me it would have taken to
develop, another friend developed it within a year of his daughter’s suicide
so I believe stress is a big factor. I am ok now and even my surgeon said the
difference if I went back to smoking or not was 5% so I carried on
smoking!

I’m a big fan of statistics. Whenever there’s 1 in a million chance to get
something [disease, fortune, whatever], the papers will report that it has
doubled when there are 2 …

I’m convinced that any cancer I get will be exacerbated by stress caused by
reports like this. I just can’t bear the fact that my taxes pay for the
promulgation of these half-truths.
I envy you your lack of embonpoint,
Anna, but I wouldn’t want to endure what you’ve gone through to achieve it.
Eat lots during Advent, and more power to your keyboard.

even the Beeb can only attribute 15% of female cancers to
smoking.

Weight, however, is another matter. Svelte as you are, Ms Raccoon, you were
lucky not to run across a doctor I know of who completely failed to diagnose a
female cancer because it is usually associated with obesity and the patient
was of normal weight.

These statistics may make good news capital but, unless health
professionals are taught to apply them properly, have the potential to cause
untold damage.

I was merely swelte when we met, Macheath, you could hide me behind a
broomstick now! I’m eating like a horse – more than Mr G – it’s either that
or a complete new wardrobe…!

I think the only thing to say to that is bon appetit!

I hope Mr G is still plying you with restorative bacon sandwiches.

I can’t think of a better place to eat to gain weight than France!

Stress may not cause* cancer, but it certainly speeds up its development
and spread. As the BBC causes me much stress – if only they reported news
instead of opinion – there is a definite link there.

* Some doctors & researchers observe that all type of body cells mutate
occasionally & randomly, all the time. So all humans have potential
cancers occurring and able to develop from these “seed” cells (which are
usually undetectable until there’s a clump >1000 cells). A healthy immune
system copes with these random events. The BBC and other sources of stress
suppress the immune system. QED.

According to an old medical book i own, cancer can occur any where in the
body but it is only noticed when it turns up in the lung, by then its too
late!

Anyone know how much cancer is caused by the stress of just listening to
the (so called) news?
And why doesn’t anyone mention the pollution caused
by all that journalistic hot air (not to mention the toxic fumes from their
motor cars)?

That 40% how reliable is it is it possible to say with any certainty that
the cigarette smoker got the cancer from smoking or just was unlucky enough to
get it anyway?

Hereditary factors must certainly be part of the issue – both with cancer
sufferers and those who aren’t blighted by it. Nevertheless, as Anna has
said in another post, the disease is a very complex condition, and can’t be
attributed to simple cause-and effect. I suspect that most lung cancer
sufferers would get the disease whether they smoked or not – but it’s
difficult to prove.
It’s not insignificant to me that the Greeks smoke
far more on average than the Brits, and yet are statistically less likely to
experience cancer. They just get a bankrupt economy
instead..!
Nevertheless, the PTB are determined to impose their own
distorted or mendacious spin on cancer stats for their own nefarious
purposes.

Pretty reliable at the level of individual risks – the figure for smoking
is (from memory) around 19%. We are pretty clear about the increased risks
of getting certain cancers (mouth, throat, lung) from smoking.

What is most striking about the research is that two-thirds of new cancer
cases are not attributable to the evil trinity of fags, booze and
burgers.

The unstated fact about the increases in the numbers of cancer cases is
their preventability but the average age at which cancers are contracted.
Terrible though the disease may be, the median age for diagnosis of lung
cancer (in the US) is 71 (the figure for all cancers is 66).

Since premature deaths from other causes (everything from homicide to
heart attacks) continues to fall steadily, the chance of getting cancer
increases. This is regardless of lifestyle factors.

The research from CRUK also confirmed that alcohol consumption in the UK
has fallen by around 40% from its peak in 2002 making alcohol far less of a
concern in cancer epidemiology.