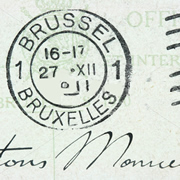 This saga reminds me of the fabled Victorian melodrama ending ‘and with one mighty bound, Jack was free’. A tale of extraordinary determination and a desire to grab life by the scruff of its neck.

Imagine for one moment that you are an impoverished student in, shall we say, Newcastle, for argument’s sake. You know little of Russian politics, you are currently engaged in an intellectually rigorous degree course that has nothing to do with politics; you would like to set up a blog that comments on Russian politics. You write to a few Russian bloggers asking for advice. You receive a few links in reply – and a little later, one of the Russian bloggers flips over to you an invitation they have received to a conference in Moscow where Nick Clegg and an assortment of political luminaries, let’s throw in George Osborne and John Prescott, will be giving a talk – and the invitation includes a ‘networking lunch’ with them all.  What would you do with it? Write a blog post describing the invitation? Or write back to the blogger asking if you could take up the invitation as Western Correspondent of the ‘We are Moscow Blog’?

How would you get to Moscow with no money? Where would you stay? Time off from your university? Your parents agreement to go half way round the world to a ‘dangerous country’? What would you say to Clegg and co when you got the opportunity? Oh, and just one more catch – in return for being allowed to ‘blag’ the invitation – you have to write a blog post detailing your adventures on your return for your friendly blogging correspondent – in Russian, not your native language!

You may not have much interest in Croatian politics, where this tale actually took place, but I think you will agree that this young man deserves an award for ‘Enterprising Blogger of the Year’ – or perhaps that should be ‘Blagger of the Year’.

I salute him, and his spirit. Now read on.

Here I am, back home, writing this post after three days spent in Brussels. I had never been to Belgium before, although I did travel throughout Europe on many occasions, so this was quite a new experience for me. First of all, this was no ordinary tourist trip as you may think. In fact, it wasn’t a tourist trip at all, not to mention ‘ordinary’, since it involves Anna Raccoon. She was not in attendance all right, but I was her representative at the high level political summit on Western Balkans, held on November 30 in Bibliotheque Solvay in Brussels. Damn, she must be proud.

Anna got herself an invitation to this summit, organised by Friends Of Europe (wow, those guys really exist) and Konrad Adenauer Stiftung. Wise as only she can be, Raccoon Lady went on a quest to find herself an Eastern Correspondent so she could send him on this tough mission which only the strongest would survive. Mark my words, you really do have to be strong to listen to the kind of bullshit Balkans politicians produce and still preserve your health. Insisting on the highest standards, she contacted me of course. ‘What do you seek, kind lady?’, I asked. ‘Brains and looks’, she stated. Obviously, I was the best choice.

Once I had my invitation to Brussels to a high level political summit, I needed some cash. As a Croatian student during the economic crisis, at least 700-800 euros to fly my arse to Brussels and get a roof over my head for two nights was a real mountain to climb. Knowing that my parents aren’t thrilled with my political engagement at all, asking money from them didn’t occur to me even for a second. So, I kinda left them out of this whole project. I pulled some strings among my friends and one of them (influential, I must say) got me a free two-way flight ticket to Brussels on behalf of some diplomatic or lobbying mission. My God, was I now officially a lobbyist?! (Ed: and Anna Raccoon’s Eastern Correspondent, complete with printed business cards!!)

Now, back to my parents. When I got myself a free flight to Brussels and made some calculations about other expenditures, I realized that my humble savings could really cover all of them. As for my state of mind, at that same moment I was already on my way to the EU capital. All that I had to do was to inform my parents. Remember that I wrote about leaving them out of this? Well, that was not a good idea, obviously. When I finally informed them, it was quite a shock for them. Although my parents have never been communists, I must say that their mind was contaminated during those rough times of totalitarianism. Situations like this one are the best example of that. When I told them the short version of the story they totally lost it. Who did you write for? Who bought you a plane ticket? Who are those people? Who do they work for? All those questions sounded like they thought I was going to some secret meeting of some dark and obscure society and I decided to sell my kidney to get there in a jet with potatoes, drugs and smuggled Ukrainian girls.

After I explained everything down to the slightest detail and even gave them links to check it on the Internet, they finally calmed down. Nevertheless, my father just couldn’t help it not to ask ‘What did you write in those posts? It was nothing nationalistic, was it?’. I almost laughed myself to the ground. It’s funny how Croatian people were raised to think like nationalists, but not to talk like them. Generations lived their lives dreaming about our independent state, fighting for it in so many different ways, but foreign crowns’ dictatorships and totalitarian systems of the 20th century made them learn how to keep a low profile. My mother is the best example. When you listen to her talking about politics or society matters somewhere in public, you’d think she just adores all living creatures on this planet. And believe me, she doesn’t. So I answered my old man: ‘God forbid, dad. God forbid.’ I could almost hear his tachycardia calming thru the phone.

Somewhere at the end of my road to Brussels a colleague of mine surprised me with a little agreement. As there is insufficient information about our joining the EU in the public domain, one news portal he’s working for was willing to give me some pocket money for my trip in exchange for couple of articles about the summit I was going to attend. After getting a free plane ticket to Brussels, now I got myself some extra money. Damn, what’s gotten into these people? Or it’s just me?

P.S. So I went to Brussels. Read my next post to find out how things went back there…
Fitch F. Rich

(Ed: Give that man a round of applause!)

By the way I even have a Racoontage mug….

Anna
Can I be your Canadian correspondent?
Moley

Raccoon International? Indeed, any more offers from anyone?
Mole is
hereby appointed! (This is an EU style election…….!)

Vital socio-political Bruxelles question for your correspondent. Is the
Manikin Pis still in full flow, or has it finally succumbed to prostate
enlargement?

Central London should have one, rotating and pumped with high-pressure dye
to deal with rioters.
Actually, modifying Churchill’s statue would allow
the old gent to dish out posthumous justice when they try and pee on it. A
recording could blare out, Crocodile Dundee-style, “Call that a urethra, THIS
is a urethra…!”

Great writing. I wish I could write any language that is not my own half as
well… I find it hard to be funny in my own most of the time.

Good posting (in all meanings of the word) Anna.

Well done, this is the kind of stuff the blog should be
encouraging.
Have you considered sending someone (ahem!) to the European
Championships in Poland and the Ukraine next summer?

I can arrange for you to be Anna Raccoon’s Western Sports Correspondent;
but the rest is up to you Saul – start working on your plane ticket first is
my advice – I’ll let you off writing a post in a second language, you can
stick to English. There, I’ve made it easy for you!

Coming from the Boro, English is my second language!

Quite so, I forgot – OK the challenge is equal then!