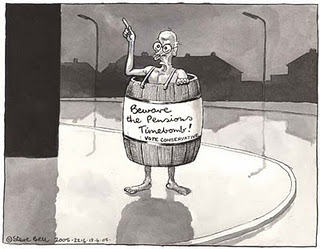 Last Friday, the Portuguese Government quietly filched almost £5 Billion pounds from the pension fund of Portugal Telecom which was sitting in the vaults of four Portuguese Banks, and added them to the country’s assets in order to bridge a gap needed to meet the fiscal deficit target of 5.9pc of GDP set by the terms of the country’s €78bn bail-out.

Robert Maxwell set the trend for robbing pension funds, Gordon Brown merely followed suit. Sweden did the same, back in the 90s. Ireland raided its pension funds to the tune of £78 billion.

I wondered which feather bedded national industry might have a pension fund of sufficient size that the Chancellor would soon be glancing an envious eye over. Why not the BBC? We have been paying for them for years. From ‘Strictly Come Dancing’ to the shortwave Hindi services in Andhra Pradesh we wonder what they do with their licence fee that actually benefits those of us who pay it.

Their pension scheme is an eye opener. They get 1/60th of their final salary – you know, the promotion they acquired 18 months before they retired, for each year up to 40 that they have worked there. If your last job paid £60,000 a year – and you would have to be pretty thick to have been with the Beeb for 40 years and not been able to progress beyond £60,000 a year! – then you will retire on £40,000 a year – with an annual automatic 10% increase. You will keep your 30% staff discount on all purchases via the BBC, as will your widow or civil partner. You will benefit from all the outreach schemes that the liberal minded BBC can devise – from counselling to Christmas parties, from free newspapers to benevolent funds if you cannot manage on your £40,000 a year – even a free visiting ‘listening ear’ service if you just want to whinge about how unfair it all is.

This morning it was revealed that 23.5% of BBC staff don’t believe there is a God! Atheists to a man.

The BBC employs more atheists and non-believers than Christians, an internal ‘diversity’ survey has found.

Why do we fund their pensions with such Christian charity? They are hardly ‘lowly paid public sector workers’ who accept lower wages in return for the security of a later generous pension?  They have done more to fuel the ‘cuts’ myth than any other body.

Let’s raid their pension fund; which body would be next in line for you? Come on, the country needs the money!

“Let’s raid their pension fund; which body would be next in line for you?
Come on, the country needs the money!”

if youf were told that they too will get old.
If the old had teeth and
voice to fight off the plundering by the strong of the weak.
If retirement
wasn’t a waiting room for the final exploitation.
If there were kamikaze
seniors.
Things might get better.

This must be the worst rhyming text ever written.
Absolutely no
connection, fortunately, with what we normally call poetry.
However, on a
point of fact.
aren’t all seniors,
kamikazee?
In the sense that
they are facing inevitable death with
quiet, admirable, courage?

Pensions have skewed the whole landscape of employment and savings for
generations.
It is no business of an employer to be involved in the
long-term post-employment funding of its retired staff. Similarly, it is no
business of government to provide inducements, such as tax-free contributions,
to support the financial services industry’s meagre offerings, which they then
tax anyway when you start drawing it back out.
It is my business to provide
for my post-working comfort, it is government’s business to provide a level of
universal post-working State Pension which ensures basic survival.
Get back
to those basics and the world would be simpler and more efficient place.

There is one simple way of doing what you want – Negative Income Tax. It
covers not only pensions but benefits as well. It also saves money in its
administration by the simple process of removing the benefit department.in
its entirety.

I don’t know about raiding pension funds but wouldn’t it simply be more
efficient if we outsourced all the civil servants posts? Let the contractor
have the problem of employing the right people and contributing to their
pension fund.
Yes the contractor wants to make a decent profit but he’ll be
more than able to do this by sacking half the staff!

Congratulations on a masterly summary of the final salary scheme – and a
good illustration of why the management are particularly vociferous in defence
of it.

There’s a supreme irony in head teachers ‘leading’ their staff out on
strike; many of them are paid far more than the rank and file – the people who
actually do the teaching – and a final salary scheme will give them a
pension several times greater than those of the PBI in the classroom.

An experienced qualified classroom teacher can earn up to £30K + allowances
while heads can get up to around £100K – the pension is currently [no. of
years service /80] x final salary. In practice, few classroom teachers
actually manage the 40 years service that would entitle them to retire on
half-pay – higher education, career breaks and, above all, the stressful
environement of the chalkface see to that.

We could start with the gold plated pension fund for our, so called,
representatives in parliament, then follow it up with the, likewise gold
plated, pension fund for the various branches of government and top it off
with looking at the union pension funds.

C’mon Anna, be fair to Auntie.

She did try to reduce numbers by forcing some to move from London to
Salford.

About the only private sector pension that comes close to being as generous
as the terms you outline is the one that used to be offered by Shell Transport
and Trading. However, I think that has been somewhat downgraded for new
members.

I seem to recall that the National Union of Mineworkers pension fund was
heavily in surplus some years ago, but the changed economic climate may have
somewhat eroded that.

Many years ago, I worked for a large engineering employer who had in their
offices staff seconded from several other firms. One vessel engineer of my
aquaintance (a very competent and experienced man) had worked for one of these
firms for twenty-nine years, paying into the pension fund throughout. The said
firm went bust. At that time, the administrators were obliged to sieze all the
remaining assets of the defunct firm, including the pension fund. Existing
pensioners were protected, but anybody not yet drawing a pension was not. My
colleague lost the lot. He was 64 at the time. (I gather that the law has
since changed to seperate pension funds from the rest of a company’s assets,
and administrators may not sieze them to compensate creditors.)

Pension provision outside the public sector has become so much a lottery,
with the rules changing so often, that a sensible long hard look at how people
can save for a decent old age without being ripped off by governments grabbing
taxes, pension funds levying exorbitant charges and dishonourable employers
robbing their staff is overdue.

The recent public sector strikers say they want what was contractually
offered when they signed up. Unfortunately, things have changed dramatically
since then, as those seeking to save for pensions in the private sector are
starkly aware. I’m afraid I have little sympathy for those who refuse to
accept to share some of the pain that so many others have had thrust upon
them.

You’ve probably spent some time in Singapore, as so many of us
did.
I’ve often been present when Singaporeans discussed their pension
funds, and all of them approved of it (it was largely set up by outgoing
British civil servants before independence).
It is a provident fund and
here is a description of it.
“Provident funds have a number of specific
features distinguishing them from social insurance pensions. In common with
all contributory pension plans, provident funds collect earnings related
contributions into a fund which is invested in interest yielding assets, but
in addition to retirement related withdrawals, provident funds allow
withdrawals for a range of merit expenditures. In Singapore, these include
housing, health, and tertiary education. Compared to conventional pension
schemes, provident funds are broad saving instruments and extend beyond
pension provision. A feature of Singapore’s provident fund is that the
accumulated balances are invested in government debt issued for this
specific purpose, which is not traded in secondary markets.”
I remember
Blair, when PM, was impressed by it.
I do not know how it is faring
today, but I had the impression that it was immune to government
interference.

I agree that many are getting more than they deserve the BBC and the public
sector can be lumped together as in most cases having too generous salaries
and pensions. There are many reasons why that is true but one is not the
politics of envy as Gladiolys says. However I think your remarks about
atheists and Christian charity uncharitable and detracts from what is an
otherwise good article.

Yes I couldn’t see WTF atheism has to do with anything , little more than
a rant really.

By the by, I think it is everyone’s duty to avoid paying the ‘TV Tax’ if at
all possible.

Surely internet technology allows this to do done. Just be a big screen,
find internet feeds – BBC iPlayer for a start – watch DVDs and/or go to the
pub to watch the big games.

Or have a conversation.

I don’t give the BBBC a penny.

Yup. We got shot of our TV some years back, fed up with funding the
Propaganda Arm of New Labour and also because we never watched it. Always
something better to do, and anything you really fancy can be seen on the
internet.

Or just stop paying the tax. I gather that Capita – i.e. TVLA – have no
rights to enter your property.

One of the delights is the biennial exchange of letters, when they try it
on again. So we get a letter asking why we are not paying the license fee,
to which I reply, “What is it about ‘We do not have a TV’ that you do not
understand?”

Any follow-up gets this – “You seem to suggest we are lying. Please put
this in writing so that we may commence legal action against you”. That
shuts them up for another two years, and then we do it all over again.

Who said the politics of envy was dead?

It’s not right for Portugal (also Ireland, GB previously – and didn’t the
Tories do it first? – and Sweden) to do what it has done, neither is this
suggestion.

What you are suggesting just feeds hatred of government interference –
aaah, is that your secret plan?

Nothing secret about it mate.
Any normal, sane, adult person would
have a serious dislike of government interference.
And I’ll bet the other
97% of the population does so as well.

… which was my point.

The 650 wasters in the House of commons for starters.