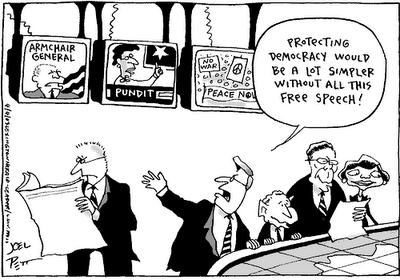 I must state at the outset that I have precious little time for Stonewall as an organisation, as they seem to relish “positive discrimination” and I find Peter Tatchell a brave but rather irritating cock.

“I will never initiate or support any attempts to legalise homosexuality”
– John Atta Mills, President of Ghana

Both of these countries have a form of democracy, although I suspect Uganda’s is more window-dressing than actual. But Ghana’s democracy is highly rated.

Being gay is still illegal in 80 of 196 countries across the world, being a lesbian is specifically outlawed in 45 – in 6 countries the penalty for both is death.

I don’t know how many democracies outlaw homosexuality, but I bet it’s a fair few:

All of which just goes to show that democracy can easily be used as a fig leaf for some really nasty aspects of human prejudice and really doesn’t deserve the endless veneration it attracts.

What was it, now… “The Wind was a torrent of Darkness, Among The Gusty
Trees, The Moon was A Ghostly Galleon, Tossed Upon Cloudy Seas…” Forgive me,
you had to be there!

It’s not that long ago since Apartheid in the US and elsewhere.
Plus
the legalisation of homosexuality is still relatively a recent event. Just
because we suddenly see the light, it doesn’t mean that everyone has to
follow suit.

I think the legalisation (or decriminalisation ?) of homosexuality is one
of the few instances when the law led the people – as opposed to the usual
situation where people mellow on an issue and the law catches up. In other
words, the law was changed against popular opinion, the people weren’t
terribly happy at the time and then got over it. There is another discussion
to be had about how homosexulality was typically discussed and represented
in the public sphere at the time – was it realistic and rational? was it
humane?
If democracy is venerated and idolised then it cannot be
critiqued and so improved.

I have a solution, but I’m too busy to tell you about it.

Just be grateful it isn’t compulsory.

We did that, years ago. It was called ‘colonialism’, and I seem to recall
they liked it….well, about as much as homosexuality!

I am fairly confident that the “anti-gay” countries are in the ascendant,
add Tunisia, Libya and Egypt to the list for next year. Ask Obambi, Sarkozy
and the camoron and they will tell you these countries are democracies.

That is a rather dubious use of the phrase “fig leaf”. If Ghana is as
genuinely democratic as you suggest, than Ghanian democracy cannot be
dismissed as a “fig leaf”, even when the demos votes for something you
disapprove of.

Just saying… what would you rather have?

Declaring an interest (gay and lesbian friends), I’d much rather have a
world where all can mix freely and easily… rather than WFW’s ideas which would
lead to isolated communities of one or the other. (The tyranny of
democracy
blah blah blah.)

It is not possible to throw different religions and races, or those with
different practices together and expect peace will prevail because the more
‘equality’ that is imposed, the more one ‘group’ will seek dominance. This
fact is compounded by the purveyors of political correctness – who are the
‘drivers’ of this equality and diversity ‘mantra’ – and who, in the final
analysis, will not even allow others their judgements. They celebrate
‘difference’ but they will not allow people to be truly different, to think
differently and to say what they think.

‘Real’ Democracy does not impose blanket rules dictated by a few, nor
does it produce tyranny.

“All of which just goes to show that democracy can easily be used as a fig
leaf for some really nasty aspects of human prejudice and really doesn’t
deserve the endless veneration it attracts.”