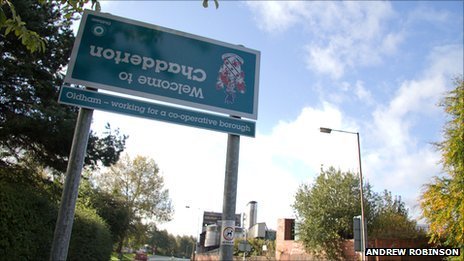 Of an uneducated workforce.

A tip of the Raccoon tail to Saul.

Point taken Julia. I wasn’t precise enough. The usual suspects butt in
within minutes like they’re hanging on every word. I do believe I named
them.

Most blogs have “the usual suspects”. I’m one of them on several, albeit
not here. It’s unlikely they are sock puppets for the host, though – hosts
generally have more subtle ways of interfering with hostile comments.

Think of it this way – you’re not addressing a literary salon, you’re
butting in to somebody else’s conversation in a pub. If you interrupted and
said, as you did, “you are ignorant snobs and have no right to any opinion”
what sort of response would you expect?

Especially when you are challenged to go and find your sense of humour,
you call the landlady “a cretin”.

I just said that the original post wasn’t funny. No bitter complaining and
no offence taken. Sorry guys.

I don’t see the various ripostes as ridicule, just a mindless defence of
this woman’s opinions. I haven’t come across another blog where hoards of
people butt in within minutes of any criticism. And yes, that is odd.

“I haven’t come across another blog where hoards of people butt in
within minutes of any criticism. “

Blimey, how many of them have you read? Three? Four?

“I haven’t come across another blog where hoards of people butt in within
minutes of any criticism.” – It’s called loyalty.

Many blogs are read as just another source of news or opinion. Few manage
to get such a loyal following. Probably because Anna tries to make the blog
to be like a pub. She is the landlady starting off a topic of conversation
and encourages the readers to join in. We aren’t a single issue blog (other
than Court of Protection and similar cases) so can’t gather loyal followers
of that topic, so to manage to satisfy many with the variety and breadth of
our posts and to keep them coming back for more is pretty good going.

Us bar staff (Matt and I, with the help of many other occasional
volunteers) help keep the place ticking along so that Anna can have a
conversation with her regulars and make the place a friendly destination on
the web.

Nobody minds debate or disagreement, but insulting the host oversteps the
mark. You wouldn’t do it face-to-face, so doing it anonymously on a blog
seems to be a lowering of personal integrity. Yes – I know that many blogs
have their trolls, but that’s no reason for the more intelligent among us
(and I include you among the intelligent) to drop our standards to
theirs.

For the record, I’ve never met Anna, Guildas or Gloria, and they’ve never
met me.

Thats what I like about this site, from Welsh Wails to Oldham (or is that
Hume) Howls in no time at all.

James, one of the more endearing qualities of the English is their ability
to laugh at themselves, an excellent example appears here regularly-Gloria
Smudd.

In these times of constant expositions of political ineptitude, downright
greed, and celebrity worship it is sometimes pleasing to see some examples of
silly mistakes, or perhaps you have it right-examples of working people having
a harmless joke.

Bitterly complaining about a joke at your expense will, as you have
witnessed expose you to further ridicule.

Oh Anna! as another who left the gilded shores of England some 53 years ago
to work in three successive countries, my heart bleeds for England now, and
for you in the face of these stupid blind nitwits who are just literate enough
to exhibit their ultimate crassness hereupon, Guardian readers or not.
I
hope your recovery continues apace.
(sent from Provence, actually, in
retirement).

That really looks like a simple job ; I could have done that standing on my
head .

On the other hand , much more convenient for helicopter pilots .

I thought the article funny…and tragic; because it reflects what my country
has become..
Living abroad attracts the bitterness (& envy?) ,
opprobrium & stupidity of the Little Englanders in our midst who have made
the once great Britain the Septic Isles.
I am used to getting a lot of
‘stick’ on various blogs from these thick ‘We won the war & are the
greatest’ morons who think that I have forfeited my right to an ipinion.
I
first went abroad to , successfully, find work; in doing so I was delighted to
find that there were more civilised & congenial places to live than the
land of my birth,,,sad but true…and it gets no better as the nation hurries to
its extinction.

What gets me Permanent, is that I may be living abroad, but I’m still
paying taxes in the UK to support these whingers who think that I’m not
entitled to any voice at all as to what they do with my tax money!
I
might not have a vote, but by God, I’ve still got a voice and an
opinion!

Commiserations, Anna…as a Pensioner & because I worked there, I pay
my few taxes in the EU’s Milchkuh. I just lurve paying other peoples’
mortgages….we need a few more ‘Little Red Hens.’

Hope you’re well on the way to full recovery…:-))

A humourless, ignorant rant from Mrs Raccoon does not warrant a
light-hearted response. I completely fail to see any humour in the original
article. Really it is quite pathetic to see how many people jump on board to
defend this cretin within minutes of any criticism.

Where is Guildas the monk?

If the original piece was jokey I would have taken it. It wasn’t.

And just to destroy your stereotype which really just deflects the
argument, I don’t read the Guardian.

“I completely fail to see any humour in the original article.”

Could the sign have been put up by workmen who may be well educated in
a different language?

Or, as Woodsy42 suggested, Australian?

Someone did this on purpose.

To suggest that the entire population of Oldham is uneducated or illiterate
is far too sweeping a statement. It is also loaded with ignorant snobbery and
written by an old woman who has left these shores. No, you are not entitled to
an opinion.

So my old dear, may I say, how thrilled I am that the Frenchies do health
care so well.

I taught at Hume Grammar for a while. The best and brightest. Back in the
SE of England they are not even close. So, sod off.

It might be safe to assume that the pupils of Hume Grammar were brighter
than you, if that ill-considered and blinkered rant was anything to go
by.

Just because someone has left these shores, it doesn’t debarr them from
having an opinion, or a right to express it. If you had been following this
blog, you’d know that Anna is of Northern extraction herself, but has lived
in many places including the SE of England, so she’ll be well aware that
there are bright and not-so-bright everywhere. It’s also undeniable that the
general standard of education in Britain has slipped somewhat in the last
couple of decades or so.

From the humourless nature of your response, I’ll assume that you are a
Guardian reader. On this blog, we like humour. May I respectfully suggest
that you return to the navel-gazing at CiF, and refrain from insulting our
landlady?

“To suggest that the entire population of Oldham is uneducated or
illiterate is far too sweeping a statement.”

Nah, it is merely a statement of fact…

To suggest that the entire population of Oldham is uneducated or
illiterate is far too sweeping a statement. I taught at Hume Grammar for a
while.

Would be Hulme Grammar – the one with an ‘l’?
http://www.hulme-grammar.oldham.sch.uk/

You’re all missing the point – it’s an artwork. The artist is making a
post-modernist ironical comment on the fact that the public sector is more
than 50% of GDP.

Eat your heart out, Banksy.

Woodsy 42 nearly has it right – but not quite. In addition to be twinned
with obscure (but picturesque) bits of the EU, Chaddeton is also twinned with
WongaWonga and the upside down sign is to show inter-community solidarity.

The fastenings for this sort of sign are on the rear and it might be that
the maker’s name is on the reverse but unusually is upside down.

Near here we had set of 20/30 m.ph. signs erected facing the wrong way. It
took the council a fortnight to notice.

The latest ‘funny’ is a one-way road off the main road that has a bike
‘contraflow’ lane, (are they stupid?). Either side of the junction the main
road is signed with ‘no left turn’ and ‘no right turn’ signs yet the side road
has a sign at its entrance inviting cyclists to commit suicide. But surely the
cyclists are also banned by the main road signs from making the necessary
turn, so how can they get there? Silly me! They ride on the pavements of
course!

And then there’s this one, although since it was China, perhaps we
should forgive them?

Aren’t you all being a bit “This-way-uppist”?

Proper preparation prevents piss poor performance, but only if you can
read.

Is not the UK a fantastic job creation scheme?

It will be when they begin to turn the whole of Chadderton upside down to
match the sign. Thousands of workers will be needed.

We drove through Chadderton on Sunday to visit my parents. Didn’t
see
the sign, but there was some roadworks in the area which is where
the
sign probably is.

I can half understand misspelt signs on the road. The workers are under
pressure to get the job done in the time allotted by management who have no
concept of real time. If they make a mistake they usually don’t have time to
correct it. So rather than correct it and get it in the neck from their
manager, they leave it. That means that manager gets it in the neck from the
customer – the council, who gets all the bad publicity. The manager then
passes the buck down to the worker who gets it in the neck. So they should
have fixed the mistake straight away.

But putting a sign on upside down. That just takes the biscuit.

And while we’re in the area of Chadderton and Oldham; the M60 in that area
is being repaired/upgraded/whatever for the last eon. Whenever I’ve driven
past the roadworks the entry slip ways to the motorway (and exits too) have
been blocked off with cones, signs are everywhere telling you about
diversions, there are even flashing signs indicating no entry. You would have
thought that was enough. But no you would be wrong. It needs a person manning
each slip way, sitting in a car – with flashing lights, just to make sure no
one goes down to the motorway past the cones, the lights and the signs. Is
this some fantastic job creation scheme?

I was in New York once and there was a side road with barriers at either
end. The barriers were each manned with 3 men in hard hats, hiviz jackets
and ID badges to stop pedestrians and cars entering the clearly blocked off
road and there in the middle, 2 men repairing a burst pipe. All employees of
the city. 8 men for a 2 man job, no wonder NY is bankrupt.

Those dratted Aussies and New Zealanders come over here and take all our
jobs!