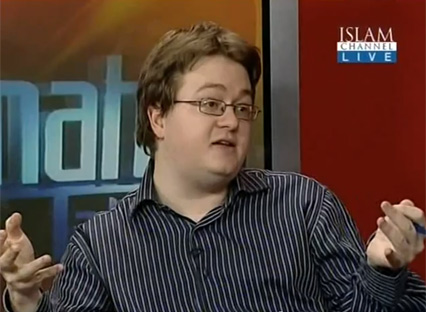 You don’t have to lift Johann Hari’s shirt tail far to reveal a nest of brown nosed friends positively panting to rehabilitate him, or whatever they call it these days.

We have a fine example this morning from an ex-‘lonely, frightened gay teenager’ who was ‘helped immensely’, giving him ‘a quiet sense of self-assurance which helped [him] through [his] final, frustrated year at school’ by Johann’s ‘glowing kindness’ and his ’compassion that positively shines through his work – thus from this passionate standpoint, he endeavours to defend Hari ‘in the fairest, most dispassionate way’ he can…never in the history of puff pieces has a writer so demonstrably demolished his objective credentials in his first paragraph. The Hari Potter Defence League in full flow.

As a blogger, I don’t pretend to be ‘dispassionate’ about Hari. He is (was) (will be again, we are assured) one of that breed of factual informative journalists that are held to be an essential bulwark between the unreliable rantings of the blogosphere and the uninformed ignorance of the rest of the world.

I have no objections to gazing upwards to those on the pedestal of professional journalism, I wish I had their training, their facilities for fact checking, their access to news stories as they occur around the world – but when I discover that they were unworthy of scrabbling around on the ground beneath that pedestal, I cannot stand silent and listen politely as I am told to ignore their little ‘attribution problems’ nor invited to agree that ‘threaded densely throughout Johann’s work is a near-reverential respect for the empirical method’ – I am liable to fall over laughing hysterically as I go.

Anyone who has read their way through the Wikipedia’s archive of ‘David Rose’s, now an acknowledged sock-puppet of Hari, desperate attempts to present Hari in an ever more reverential manner, will be puzzled by this piece. Written as it is by a man who claims to have been turned into a Hari acolyte by his ‘many articles on gays issues – his obituary of Section 28, his profiles of Peter Tatchell, his condemnations of homophobic bullying, and on and on’, they will remember that one of David Rose’s many arguments with the editors of Wikipedia was on the subject of whether to mention that Hari was gay or not…the editor countered that he didn’t think it was any more relevant than his weight. Back came the hysterical ‘Mr Rose’ – ‘Now you are referring disparagingly to Hari’s weight’ – the entire paragraph can be paraphrased as ‘please lock me [him] into the support of the gay community – but don’t you dare call me [him] a fat poof’.

Does any of this name calling matter. Actually yes. For Stuart Rodger would have you believe that ‘we need’ lying, deceptive, manipulative novelists such as Hari. (is it this Stuart Rodger, if so, who now claims to not only be an ex-confused teenager, but an ex-happily illumined Lib-Dem supporter? Are there support groups that can help with these multiple problems?)

‘We rely on the likes of Johann, therefore, to provide us with what we don’t find elsewhere.’

Apparently, the Guardian, the New Statesman, the Independent are not sufficient to fill our little heads with Fabian nonsense written up with non existent facts and figures, no ‘we need’ Hari and his ilk to promote the true words of socialism and enlightenment.

‘Because the truth is that, if his return were not to succeed, it would be a massive, massive loss to progressive journalism.’

Should I assume then, that ‘progressive journalism’ is an entirely separate discipline, with separate ethics, than the ‘main stream journalism’ we have been exhorted to look up to?

‘He has written very vivid, moving portraits of how climate change is already affecting populations in Bangladesh, Sudan and the Arctic, brilliantly fleshing out the dry statistics into images and stories more easily comprehensible to the reader.’

‘Fleshing out’ – is that what they call it?

Then we have his perspicacity, or utter brilliance as his supporters would tell you:

‘He warned Cameron would oversee a collapse in economic growth – it’s coming to pass.’

Half the Blogosphere has been warning that Cameron would find himself overseeing a collapse in economic growth. It wasn’t hard to predict. You could have predicted it yourself from your ivory tower up in Glasgow. It was writ large and loud the day those ‘progressive’ politicians like Brown and Balls started doing business with the dodgy loan sharks and committed the rest of us to a decade and more of penury as we tried to muster the wherewithal to get our Sunday suits back from the tally man.

Apparently the Guardian, the Independent and the New Statesman have their fill of ‘progressive’ journalism this week – Mr Rodger’s fawning attempt at rehabilitating Hari is so far confined to the media section of an obscure Scottish blog.  There it has already attracted 27 retweets from starry eyed fans as it makes its way to cyber celebrity.

We mere bloggers must write seven days a week – not Hari’s apparently tiring two columns a week, bound to make the occasional mistake eh? Without the tribal support of gay pride or Glasgow socialists. Perhaps I should take up writing long impassioned articles about surviving cancer treatment – 1.8 million fellow sufferers in the UK would make for a mighty impressive retweet; I could make up fake quotes, develop an ‘attribution problem’, hire a sock puppet to defend me – and only write two days a week.

On reflection, I’d rather be able to live with my conscience.

* Harigals. n. Viscera – what we used to call ‘lights’ in Liverpool. The bits you’d feed to the dog.

The Works of Robert Burns by Robert Burns (1841)
“… that I daur say if my harigals were turn’d out, ye wad see twa nicks i’the heart o’ me like the mark o’ a kail-whittle in a …”

Don’t say you don’t learn anything around here!

Am I being a cynical old soul, in assuming that Mr. Rodgers is simply Hari
pulling his old stunt and pretending to be someone else ?

Iread your words are you scouse with brains ( like many others)

Mrs Dale has the copright on that moniker shurely… (ask OH).

Isn’t a kail-whittle a knife for cutting those other members of the cabbage
family, kale and turnips, or swedes to the English?

He’s obviously not tried the cabbage diet. I also think that as a published
hack it is relevant to know just exactly what he has grown fat upon if not his
creativity.

O great oracle, what’s a kail-whittle? Wiki’s no help!
(Is it perchance
a knife used for cutting kale/kail?)

It’s a knife wot you cut cabbage with in the depths of winter…..