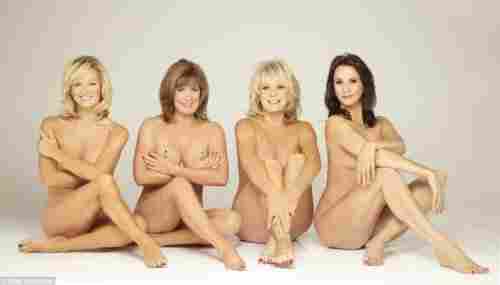 Being a man (well a sad lad), I couldnât help but click on a Daily Mail article which was highlighted by a photo of four naked women. The Daily Mail know this is what men do so even though they write articles which whip up the feelings of their readers with articles deriding weird celebs exposing themselves, they still use photos of the celebs exposing themselves to attract readers.

Like any good Web 2.0 social media site, the DM encourages reader input where readers can write about how stupid celebs are, though usually making themselves look stupid in the process. Itâs also very easy to troll DM readers easy they usually engage fingers on keyboard before they engage their brain. In some way, the DMâs lack of a fully featured commenting system stops full blown slagging matches from kicking off as it makes it hard for the readers to engage with each other.

An example comment to the above article being this one

Sorry, but these ladies come over as being pathetic. They are constantly trying to make everyone believe that they can pass for women in the first flush of youth, when they are clearly too old. I am all for older women looking their best and doing well, but anyone over 45 is going to looks less than fresh and young, so stop trying to make everyone believe that you are achieving it.

This comment looks like a troll just asking for the older DM reader to respond and they do in the comment rating system. Giving it a red score of 83 when I looked at it. But the comment could also be aimed at the younger DM reader who thinks anyone over the age of 30 is past it. And the younger readers did respond to the article and gave their support to it by giving it a green score of 84.

How can it have both score you ask? By being a duplicate post, brilliantly captured in juxtaposition with each other in this screen grab (which you can click on to see in more detail).

>But Gillian Taylforth looks in decent nick for 56 and were I not spoken
for I might be lowering the tone with some Mrs Robinson type remark.

She could probably suck you into it.

The comments system in the DM is âTwo Minutesâ Hateâ. Even if you accept
that your contribution means nothing, itâs very tempting to hit those
arrows.

*But Gillian Taylforth looks in decent nick for 56*

Bit harsh on the two in the middle not to have Pshopped them too.

well poo to SBML â I like reading the Daily Mail.

SMBL, not sure what your point isâ¦

The DM does, at least, allow comments on all articles, its comment
interface is very similar to digg, whereas other uk news sites use a more
traditional comment system.

The big difference in the UK press comment systems has got to be the BBC
and Guardian only allowing comments on selected stories. Where as the Daily
Mail, Telegraph & Independent allow comments on any story. Dont know about
the Times.

The Timesâ paywall kind of restricts stumbling across something and
commenting no matter what sort of system they use.

And on the more important point of four naked women, I have to admit that
I didnât know who three of them were. But Gillian Taylforth looks in decent
nick for 56 and were I not spoken for I might be lowering the tone with some
Mrs Robinson type remark.

âThe DM does, at least, allow comments on all articlesâ¦â

No, comments are often disabled for legal reasons.

Or when their moderator is in the loo or having lunch!

No point at all, itâs a silliness article. Just having a minor dig at
Daily Mail readers who generally comment on topics in a sane manner though
sometimes head down the mob mentality route rather than the wisdom of the
crowds path. Plus getting a bit of totty on the site for the lads. Sex
attracts you know and getting more readers is always at the back of our
minds when we write articles.