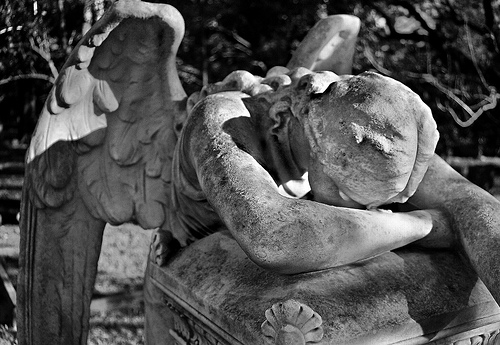 The reporter assured us that he thought he saw a tear in Peter Hainâs eye. The last time something resembling that was spotted, it was the day he announced his resignation after the police launched an investigation into donations to his campaign fund.

What could have occurred of similar magnitude?

Four Welshmen dying in the same place at the same time from the same cause, apparently.

A sad event, a tragedy for the families concerned, undoubtedly. But why is the âwhole nation mourning with themâ? Four Welshmen dying in disparate accidents doesnât have the entire nation mourning. It is of interest only to four welsh families and their friends and colleagues.

Is it because all four died in a tough and dangerous job? An average of one construction worker a week dies in his workplace â somewhat more dangerous than being down a mine, I would wager. Every ten days an agricultural worker dies in his place of work. Every two weeks someone in the manufacturing industry dies. Surprisingly, a âservice sectorâ worker dies every week in his place of work. Those call centres are dastardly places.

If I were one of the families who had lost someone in the past week in a place of workâ accident, I would be mightily pissed off by the extensive coverage of the four Welsh miners, why isnât the whole nation mourning with my personal tragedy? Is my East Anglian butcher recently extracted from a mincing machine worth less than a Welsh miner?

Is it because they were killed unexpectedly? What of the ten people murdered every week in the British Isles? Did they go out that morning âexpectingâ to get killed?

Why is it that the media goes into overdrive at the sight of more than one person killed in the same place at the same time? The local MP turns up to give homage, community leaders appear out of the woodwork? Every last person with a tenuous link to the deceased is given their ten minutes of air time to explain how devastated they are at the loss of their darts opponent?

Do they ever consider how insulting their words are to those who sit alone and mourn their own loss â simply because they had the misfortune to die in a hideous accident that didnât involve their colleagues?

We barely accord this much coverage to those who actually do die on our behalf â the armed forces in Afghanistan.

Was going to send you a piece saying exactly this with the title:

The hierarchy of grief revisited.

>Why is it that the media goes into overdrive at the sight of more than
one person killed in the same place at the same time?

In this case Iâd suggest because we donât have too many mines left, and
that they are pretty safe.

âChinaâs mines are dangerous by any standard. More than 2,600 Chinese
miners died in accidents last year.

The countryâs safety record is far worse than that of other nations.

This is partly because China has the worldâs largest mining industry which
inevitably makes the raw accident numbers look high.

But its mine safety record is also poor by measures, with the country
accounting for 40% of global coal output but 80% of mining deaths around the
world each year.â
http://www.bbc.co.uk/news/business-11497070

You ask:
Why is it that the media goes into overdrive at the sight of
more than one person killed in the same place at the same time? The local MP
turns up to give homage, community leaders appear out of the woodwork? Every
last person with a tenuous link to the deceased is given their ten minutes of
airtime to explain how devastated they are at the loss of their darts
opponent?

You get an answer:
The only sensible answer we could find was a sort of
lingering folk memory of the dangers inherent in the deep mining industry of
the past, and of the long string of fatal pit disastersâ¦proud to have been a
miner but no son of mine will ever go down the pit

Deaths in a particular industry can disproportionately affect local
communities. Loss of life due to coal mining remains in living memory. Aberfan
anyone?

But I agree with you that the way the MSM express and encourage faux
concern or grief is wrong and the way prominent figures want to be a part of
it is worse. Itâs not new: Ace in the Hole, starring Kirk Douglas, portrayed
it in 1951.

I donât agree that a failure to get the same treatment would, or even
might, be insulting to those left to grieve alone in different circumstances.
Solitude seems preferable, to me, but I have not had to grieve in this
way.

I was surprised to see that coal mining, albeit on a small scale, in a
drift mine not a pit, has been revived in South Wales.

Looks like a few of these idle, feckless Welsh referred to in the comments
are prepared to take a job to earn a living, at least. Despite it being one of
the riskier jobs. Probably only hoping for a compo claim, eh?

âAce in the Holeâ deserves far more screenings than it gets â and a place
in every journalism course.

The most revolting aspect of the media frenzy surrounding a lengthy
rescue attempt is the indiscriminate way that either outcome â survival or
death â becomes the occasion for mass outpourings of vicarious emotion,
whether celebration or what you rightly call âfaux griefâ, from those with
no genuine connection to the disaster.

On a tangent, my great-grandfather once owned a mine that flooded, much as
this one did, trapping six men inside.

Believing the men could be saved, my great-grandfather borrowed heavily
against his substantial estate to finance the operation. The six men were
finally brought to safety, although great-grandfather was financially
ruined

I was brought up with this story â and with the family concensus that,
however much his descendants might regret the loss of his fortune, it was
money well spent.

It is interesting that, although there is a wealth of information and
speculation out there on mining disasters, this one seems to have been
overlooked; the reason, of course, being that no one died. This puts it so far
down the âpublic interestâ hierarchy as to be virtually invisible.

I donât believe a word of your story!

We all know from school history and from television, and from the Labour
party, that anyone who employs other people must be an evil and sick minded
person only interested in counting his money, and oppressing his slaves.

My brother was killed on 7/7, but not in London.

A year later my employer sought to impose a 2 minute silence in memory of
those killed in London. I did try to argue that he had a duty of care to avoid
upsetting my feelings but to no avail.

My brotherâs killer had been caught two days before drunk and asleep, in a
stolen vehicle. Undettered he stole another vehicle and again drunk performed
an illegal right-turn across a dual-carriageway across the path of my
brotherâs motorbike.

Two years later the local highway authority closed the gap in the median
reservation that the drunk had used. Assuming the drunk had behaved himself in
prison he would have been released six months earlier.

Every time 7/7 is brought up we have a little groan to ourselves.

The Media are fervently hoping that an evil capitalist negligent employer
will be blamed. Thereâs the interest? Mine owners especially, have long twirly
moustachios.

I heard Peter Hain on R4 this morning saying âwe need to find out who was
to blameâ Why does someone always have to be to blame? Canât it just be an
accident in a dangerous industry?

Oh, hang on, she closed down all the mines, right?

Unfortunately the owner of the Mine was one of the deceased. I am
sure that Mrs T will get the blame somewhere though.
TTFN

Remember the public grief when Diana died? Thousands of people who had
never met or spoken to her were overcome with emotion and the need to leave
flowers for her. As I had not met her, my reaction was, âthatâs sad for her
familyâ and my interest lasted approximately ten seconds. This made me weird,
unfeeling and callous (according to friends busy emoting over it).
Of
course itâs sad for the families of these miners, but it must be worsened by
the media feeding frenzy around them.

The number of deaths on the roads in the UK averages about 3,500 a year.
Ten a day. Unless itâs a real biggy, you never hear a peep.

By coincidence, I mentioned something similar on another forum yesterday,
and the only sensible answer we could find was a sort of lingering folk memory
of the dangers inherent in the deep mining industry of the past, and of the
long string of fatal pit disasters. Outside of hospitals, the only industry I
know of that had a statutory obligation to provide a mortuary at the workplace
was coal-mining. So much for âelf-n-safety â we know youâre going to bump âem
off, but just give âem a bit of dignity when you do. It does make you wonder
why the fight to save an industry with so little regard for human life was so
protracted and bitter.

âIâm proud to have been a miner, Boyo, but no son of mine will ever go down
the pit.â

Could it be because they are Welsh and therefore victims? It could have
been worse, they could have been Scousers!

Scousers!! Working? Oh I did laugh at the though of the only 4 scousers
in employment all dying on the same day.

The media spectacle was that it was down a mine and everyone knows that
was a top story last year. Therefore get the cameras in.

When a fishing boat sinks it barely makes the news.

Ah Liverpool, the âCapital of Griefâ where Interflora has a Blue
Light delivery service (remember the âDead Babyâ that turned out to be a
Chicken carcass? The shrine of flowers was already built before the
penny dropped). The deaths were a tragic accident and their families
naturally grieve but these deaths made the news. Iâm afraid that for the
other deaths, no one will bang a triangle. And then the Media Circus
will move on to another townâ¦

Yes, I think youâre onto something here â a reachable scene, an ongoing
event, the possibility of rescue. It has all the hallmarks for a âmedia
eventâ.

Crikey. Wonderful stuff, especially your last paragraph. You do have the
knack of saying what needs to be said.