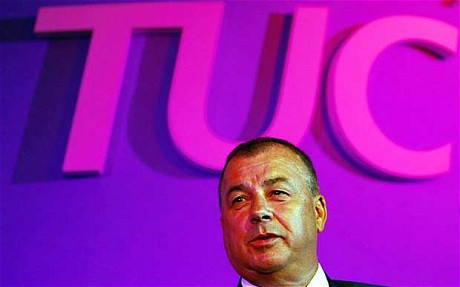 The decision of various trade unions across the UK to take the gloves off and wage war against the planned reform to public sector pensions of course prompts comparisons with the Winter of Discontent in 1979 and even the 1926 General Strike, probably the most widespread nationwide withdrawal of labour in Britain’s history.

Dave Prentis (Unison) has told his members to prepare for “the fight of our lives”, round one of which would appear to be a “day of action” that has been pencilled in for 30th November. Judging a book by its cover is rarely a wise thing to do, but the thought of Prentis entering the picket line to the theme tune from ‘Rocky’ made this bunny smile nonetheless.

Meanwhile, the magnificently moronic Mark Serwotka (Public and Commercial Services Union) offered an insight into the situation that is certainly unique:

“there is no case whatsoever to make any changes to public sector pension schemes”.

The fact that the privately-employed are paying more into the public sector pot than those actually on the state payroll, with the net result of a £1 trillion black hole, clearly do not represent ‘a case’ as far as Serwotka (£82k salary and £25k pension contribution) is concerned.

I don’t blame union members for attempting to look after what they have.

Faced, as many are, with the prospect of paying slightly more for slightly less, then retiring five years later, most of us would put up whatever resistance we could (it should be added that in the largely non-unionised world of the private sector, the box of potential weapons would be comparatively light).

Self-interest is a perfectly rational drive and so the action in itself does not antagonise this bunny nearly as much as the likes of Serwotka, whose attempts to dress this up as a ‘modern day class war’ or ‘all about protecting public services’ are painfully transparent.

The real question is – does a case exist for those in the private sector subidising the superior pensions of state employees, especially when one considers that the gap in basic salary between the two was wiped out by a decade of New Labour’s generosity with other people’s money?

Then consider that the deal on the table would still leave the public sector with a superior pension scheme across the piece and there is really only one answer – this change, albeit a modest one, cannot come soon enough.

However, this is also a massive challenge for Dave and his government on a number of levels.

Firstly, he may come under real pressure from large swathes of the general public to cut some sort of deal – either because they sympathise with the strikers, or due to the visible absence of some frontline services (most worryingly, gravediggers are said to be on the list of potential dissidents).

After flip-flopping over NHS reform that were not all that radical to start with, another backward step to a vested interest group is likely to do irreparable damage to ConDem credibility (not that this would necessarily be a bad thing in isolation).

Politically, this could become very difficult.

Having allowed and practically encouraged a wide-spread demonisation of public sector employees, then done nothing to counter it, he might be bitten on the proverbial to some extent in opinion polls and the like, though there is some truth in the suggestion that most of those effected were never likely to vote Tory anyway.

Many went LibDem last time out though, and the prospect of Nick Clegg turning windsock to prop up their share of the vote, ratting on his mate and collapsing the Coalition majority is a more realistic one than some imagine. Failing that, around 30 of his MPs following that course of their own accord would have a similar (though less symbolic effect).

Then there is a real problem that is almost certain to resurface – remember Fred Goodwin and his £703,000 per annum pension (total pot would require £28million of contributions from you or I)?

The former RBS boss was among the 20 directors of banks bailed out by the taxpayer who pocketed yearly payouts totalling over £6million.

All of this was before Dave’s time, but one gets the impression that his disgust at this situation was half-hearted and less than completely sincere – like Prentis, Serwotka and co, the fatcat class symbolised by Goodwin sought taxpayers’ money that was clearly unmerited.

Unlike them, they got it and were ultimately rewarded for clear and demonstrable failure.

This might be the caviar communists’ best weapon in terms of winning hearts and minds, so Dave had better have a credible answer – if he’s going to attack the undeserving rich, he’d do well to at least sound like he means it this time. Take care and I’ll catch you soon.

“… but I don’t think it’s quite dawned on many in the public sector just
how hard life has become for many in the private.”

Perfectly echoing a point I’ve been making elsewhere. Sadly, for them,
they’re about to be dealt some reality.

Me again – sorry, but been thinking and need to post more.

(Background – I’m a 32yr old NHS employee of 10 years and, probably, the
rest of my career – definitely won’t be striking, Union hater)

Anyway, really to pick on Engineer’s point and the general ‘The private
sector pension is crap, so should the public sector’. Why is this? – there is
no logic to this statement.

My main worry is, what happens when the government do increase our
contributions – where does this money go. If the government don’t start
storing it into a fund somewhere and keep spending/wasting it on things that
governments do, surely time I come to retire we’ll be in exactly the same
place, no? There will be no money left?

SO, I’m comfortable with the fact that our current pension is unaffordable,
but any changes that are going to be meaningful are going to have to include
changing the way the pension is unfunded. Otherwise all you are doing is
taxing public sector workers more. The chances of that happening? Fuck
all.

Your pension money will probably be ploughed back into the NHS and
allocated to devising yet more ‘pathways’ requiring interminable mandatory
training courses.

The point is the disparity in pension provision available in the private
and public sectors. Having worked in both, I’ve seen it for myself. I’m not
in favour of making public sector pensions as crap as private sector ones,
but a few measures like reversing Brown’s pension fund tax-grab would help
those who have to make their own provision, and also, through their taxes,
fund a substantial proportion of public sector pensions.

I’m genuinely not taking a pop here, but I don’t think it’s quite dawned
on many in the public sector just how hard life has become for many in the
private. Index-linked pensions of half final salary have not been available
to them for some years.

Your Pension Contributions go no where as your final pension has no
relation to your contributions. That is the point of unfairness that the
rest of society are complaining about.

Not to mention 6 months full pay and 6 months half pay if you are sick. 4
times salary as death in service benefits. All of this comes from the tax
payer or the money borrowed by government to pay for it. That is why the
shortfall in government income to expenditure is called the Public Sector
Borrowing Requirement.

Even with all the changes planned your pension will still be the best in
the land. Fear not you are onto a winner. All your previous scheme
entitlements will be banked and the new scheme will simply cover the
remaining years.

I very much doubt that these strikes will gain any meaningful public
support.

Saving that sort of money, and contributing heavily to the pensions of
public sector workers, would require an income of how much? £50,000 per annum
for twenty years?

Methinks the public sector should count it’s blessings, not strike for
more.

Sorry to digress somewhat, but I am not known for missing an
opportunity.

Can someone help me. I am trying to learn how to survive on my £100 a week
State Pension. Me and the dog would have frozen or starved to death, or both,
if I didn’t engage in some hard physical labour on regular occasions. But I’m
getting a bit past it now. What shall I do?

PS. Going back to Angleterre is not an option as I do not wish to be mugged
or to die of heart failure from worrying about such. And besides, it’s cheaper
to live here when the dog drinks and smokes as much as I do.

I’m sure there’s some classic advice along the lines of “eat the dog”,
isn’t there?

The way things are going it’s more likely that the dog will eat me. And
pro rata it makes morse sense economically.

Could someone point me in the direction of the data that compares what NHS
emloyees pain in in terms of contributions to the amount that gets paid
out?

I mean, like, today. So all public sector workers for 2010/2011 will pay in
£xM pounds and the goverment pay out £yM in pensions for those already
retired.

Public Sector Pensions are calculated on a system called Superannuation.
It is a defined benefit scheme where contributions and actual pension
benefit have relation. The scheme is based on the final salary of the
employee based on the number of years.

By most calculations there are several unfair advantages in the public
sector pension scheme. Most public sector pensioners would have received
their entire pension contributions back within the first 10 years.

As they retire earlier at between 55 and 60 they also live longer
according to the mortality tables of actual deaths based on retirement age
used by pension annuity providers to calculate how long you will live after
you start getting paid your pension.

The scam in the system is many public sector workers get a substantial
pay rise in the last few years to boast the pension fund. Extreme no real
example. Worker A works for 34 years on average 25K salary then gets a
payrise to £100k. He would receive £50k per year pension and a lump sum of
£150k tax free.

A simple proof Public Sector pension is the best is that NO IFA in the UK
can advise you to leave the scheme and join another scheme as it is the Best
Gold Plated scheme backed by the Government and paid by our taxes.

The actual calculation is 3/80ths of final salary per year of service for
lump sum and 1/80th for the pension. Therefore 40 years service is 40/80th
final salary indexed linked for the future to it will rise over the next 30
years you are receiving it.

Nothing in private sector for normal workers exists.

The argument used is that the Average worker is only on £4000 per year
pension after retiring from the public sector. This is a red herring. The
comparison must be made on the scheme not on what the lollypop man gets
after working for 10 years or the cleaner part time for 25 years. They are
still much better of based on what they contributed.

Finally I would like to say. Let the unions strike. Unlike in the 70s
their members all have mortgages, car loans, etc. It will last a few days at
most. Let them sit in the cold before they bankrupt the UK