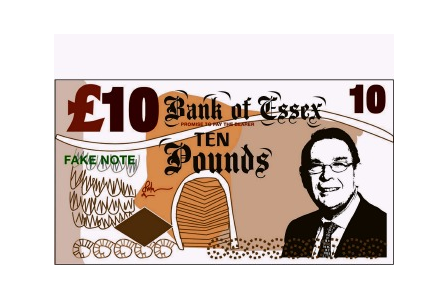 Not so fast, my lovely, that electronic tag on your ankle was put there for a reason – so they would know where you are.

Last week Hanningfield was released from jail after only nine weeks of a nine month sentence on a home detention curfew. This means he was seen as low risk but must wear an electronic tag.

After Hanningfield, the Essex Pig Farmer who still dresses the part, was jailed for fraudulently claiming nearly £14,000 from the House of Lords at an eight-day trial in May, Essex County Council successfully rushed through emergency legislation to suspend his privilege of an £11,500 county allowance while behind bars.

“A 70-year-old man from the Chelmsford area has been arrested…for fraud as part of an investigation into expenses claims at Essex County Council.

“He has been released on police bail until January 18, 2012 pending further inquiries.”

The council now plans to publish a full itemised list of transactions made by Lord Hanningfield on the corporate credit card as soon as Essex Police finish their investigation into alleged expenses fiddling at County Hall.

For those who don’t visit the Tavern, may I offer the following (which has
suddenly become topical again)?

(with apologies to the Beatles: Strawberry Fields)

Living is easy with my credit cards; taxpayers fund it all, you see.
You
claim allowances all round and it all works out
Travel and dinners all for
free.

Other peers, I think, did just like me; if sleeping in my bungalow
While
claiming hotel bills is not a given right,
Surely, I think, it’s not too
bad.

With Essex council funding me, a generous expenses scheme
Invited me to
claim; well, I’ve done nothing wrong,
But will a jury disagree?

Perhaps somebody could explain how to the Independent…