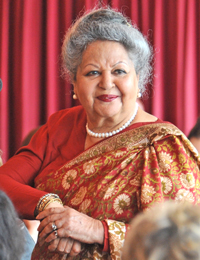 Gosh, Hansard can be exciting.

Gasp in wonder as The Sun gets hold of the quote (not yet, The Sun hasnât risen yet!)

Feel the angst of a maligned community. Wait for the quotes from âCommunity Eldersâ.

Enjoy the sigh of relief from the âSingle Motherâ estates of South Wales.

13 Sep 2011: Column 706 The minority communities in this country, particularly the Pakistanis and the Bangladeshis, have very large numbers of children and the money that follows the child is an attraction. Nobody likes to accept that or to talk about it because it is supposed to be very politically incorrect. Well, I am politically incorrect, and there is no doubt that six or seven children give you a far larger income than three or four. I think it is about time that we stop people using children as a means of increasing the amount of money that they receive or of getting a bigger house.

In the countries of origin, these people-Pakistanis, Bangladeshis and even Indians-have large families because there is no safety net. When you get old, it is only your children who are going to look after you. That does not apply here. Every old person will have their pension and will be looked after. It is time to introduce the pattern of this country and to tell people that they must start following it. At the bottom of the education league tables are the Pakistanis and Bangladeshis, and top of the league are the Chinese and Indians. Indians have fallen into the pattern here. They do not have large families because they are like the Jews: they want their children to be educated. This is the other problem: there is no emphasis on education in the Pakistani and Bangladeshi families. If there was, there would be no problem. But we have a large number of young people, particularly young men, who have very few skills and very basic education and they are not really skilled to do any work even if the work were available.

It concerns me that we do not say anything, we do not do anything and we do not send any message that this is not acceptable.

Now 78, Shreela Flather was born into a prominent Indian family and came to London to read for the bar. In 1952, she married English QC Gary Flather, now 66, by whom she has two sons, and feels that she is thoroughly anglicised to the point that: âItâs too much trouble to cook Indian food. I prefer to use Loyd Grossmanâs sauces.â

They are fast-breeding parasites on the rest of humanity.

Vaguely embarrassed to mention it, but you may wish to correct Mr Flatherâs
age.

Debrettâs gives his DoB as 4/10/1937 so the year of marriage is also
unlikely. Iâm guessing 1962 is more likely to be correct.

We frustrated arithmeticians are everywhere: Iâll put the odd year down
to La Difference and go cut the grass.

She forgot to mention kidnapper Karen Mathews (mother of seven) and burglar
Wayne Bishop (father of five, whose sister has seven).

In so far as she fails to recognize that exactly the same economic logic
applies regardless of race, her statement is partisan. But thereâs nothing
wrong with her general observation â it just doesnât go far enough.

I expect the Witchfinders will be round by teatime, but not quite know what
to do about a tanned lady. Stand back, folks, for another argument over
whether or not this is all covered by parliamentary privilege. (Iâm assuming
it is).

As usual, WOR spot on !
To enlarge on her comment, the fact that the
lady is a Tory , in the minds of the bedwetters from the graun and the bbc,
cancells out the ethnicity issue, in fact it gives her a sort of added hate
status.

Glad someoneâs saying it. But I doubt it will be reported in the MSM, which
of course has to be approved by the Ministry of Information and the Thought
Police, lest it distract the masses from their panem et circenses/

The statement about educational attainment is backed up by Ofsted figures.
As for the number of children, weâve just had the census, and it will be
interesting to see whether the facts bear out the Baronessâs views. If true,
and Iâve no way of checking, itâs a shame this came from an Indian peer. This
will be dismissed by Bangladeshi and Pakistanis as their old enemy having a
go. Had a non-Indian said it, it would carry more weight.

I wonder what would have happened if a native Englishwoman had said
it?

Depends if she was wearing an enamel badge from a jam company at the
time.

what a fine woman.

get her into government.

i would love to see a tv debate between her and toynbee!

That goes for whites and blacks as well as browns.

Itâs a recipe for social â and economic â disaster.

This is gonna be good!
Pass the popcorn.