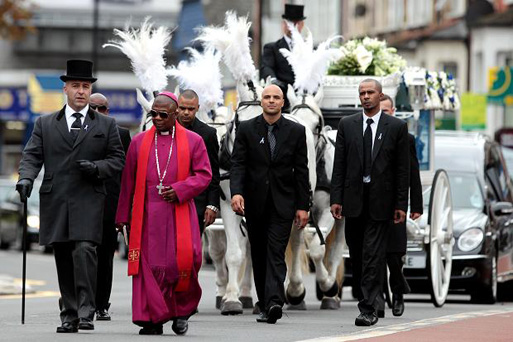 Remember Mark Duggan? The family man whose partner Semone was so devoted to him that she had three of her four children by him:

âMark was a good dad, He loved his kids dearly. He idolised them.â

The uncle of whom his niece said:

The impoverished son of a decent loving family:

âIf Mark had been a gangster he would have lots of money, which he didnât have,â said Mrs Duggan. âHe would have been out all the time with lots of others but he wasnât. He was a loving boy with a good heart. He loved his children, he loved everybody.

The family of whom stated:

A private funeral will be held on 9 September before a reception at the Broadwater Farm Community Centre.

Pamela Duggan said: âDesmondâs dead and none of his family are coming â we donât see them. Itâs all lies, saying Mark was under their wing. It makes me angry and thereâs no way theyâll be here. Mark hadnât seen Desmond since he was a baby.â

Among the relatives she was referring to is Noonanâs brother, Domenyk Lattlay Fottfoy â he changed his surname to the acronym for âLook after them who look after you, f*** off them that f*** off youâ. He has spent nearly half his 47 years in prison after committing dozens of armed robberies and attacks on prison officers, but now runs a security firm.

A funeral procession that required 10,000 police officers to monitor the expected 3,000 mourners. How many family men on the Broadwater Estate even have 3,000 family and friends?

In whose interests was it to turn this private family funeral into a showbiz extravaganza â and why did the gentle loving family who just wanted a quiet private funeral allow them to?

The answer must lie, surely, with whoever footed the bill. Anybody know?

How do they get a bishop? By going to a small church.

According to reports it is Bishop Barrington Burrell of the New Testament
Church of God, Wood Green.

So he is not recognised as a bishop by any mainstream church (although they
claim 30,000 members across the UK, which is larger than I expected).

I once worked for a West Yorkshire born Caribbean chapâ¦. his father was a
Bishop of some church or other. Nice fellow, devoted and very highly
respected.

Sadly, his reputation took a dive when he casually asked me one day âIs
it Easter next week?â

So, they really DO live in poverty! Look, all the women have been unable
to get clothes that fit them properlyâ¦

Oh my Godâ¦. what a tasteless parade of tat.


What! No New Orleans style Jazz procession too?

To be honest, if the thought of your friends/family giving you this type of
trashy send off doesnât persuade the Broâs to give up their guns then nothing
will.

Who paid-why the taxpayer, of course. Even if the MetPol did not sign the
cheque, the erstwhile wife has no means, so the money is coming from the
welfare dept. Even if the funeral was paid by a âwhiproundâ amongst his
associates the source of their income is mostly obtained from
welfare-scamming clients.

Yep, you paid for it-enjoy!

The Met paid, so that itâd look like a real gangsta funeral and thereby
support their proaganda.

Ah, if only they hadnât played into the Metâs hands, then. By, well,
being themselvesâ¦.

Slightly flawed, though, Ms. Raccoon. Pwoppa naughtie gangstas have
black horses for their send-offs (bad guys, see) so this bloke must have
been a genuinely decent law-abiding sort with his four magnificent greys.
I know, âcos I went to Reg Krayâs funeral and he had black horses. I donât
recall seeing either you or Julia there, though, Anna. Show some respek
next time innit.

I wasnât at Reggieâs Observer. Charlie was a different matter
though.

Anna I do not jest! I know this to be very true indeed, although duggan was
killed rightfully in the circumstances the met have stumped up the bill to
appease the family

Note that, though this is an insult to all normal right-thinking people,
we wonât go rioting and burning.

No Julia, weâll just sit here getting our noses rubbed in it as usual,
whilst being divested of over half our income and wondering how weâll keep
making ends meet.

Why a Bishop? We have a right to know. I wouldnât get a Bishop for love nor
money, and I never done nuffink wrong, much.

No doubt from âincomeâ not declared to HMRC, whoever paid for this
tasteless charade, which dishonours funerals in general, and religious
funerals in particular.
Who paid for the police?

Carry a gun in a sock (itâs to do with attempting to avoid prints and
forensics) and you are likely to get shot. Saves on the prison costs too.

What amused me was seeing somewhere that the sock âhad a hole in it,
ready for use!â.

Surely, itâd make its own hole on use?

He was such a family man!

âThe mother of his 4th child has not been identified, but he is said to
have been in a relationship with another woman, Precious Douhaihy, who told a
newspaper that she was expecting his child. It has been established that Mr
Duggan regularly booked taxis from her flat in Hoxton, north London.â

If heâd survived the shooting, I wonder if heâd still be able to book a
taxi so nonchalantlyâ¦?

The met police have paid for this funeral.

You jest Sir, surely â you mean WE paid for it???? Tell me that isnât
true, please!

Call me cynical but my first thought was also that the taxpayer must be
picking up the tab.

Over at Insp Gadgetâs blog, thereâs a LOT of speculation (and fury)
that the Met have contributed.