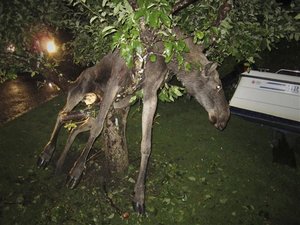 From NPR via Liberal Conspiracyâs sidebar:

A seemingly intoxicated moose has been discovered entangled in an apple tree by a stunned Swede.

Per Johansson says he heard a roar from his vacationing neighborâs garden in southwestern Sweden late Tuesday and went to have a look. There, he found a female moose kicking about in the tree. The animal was likely drunk from eating fermented apples.

Alas it is not a new story. Some years ago a similarly drunken Swedish elk
was accused of causing the death of a woman. Animal lovers will be please to
know Swedenâs politically correct Thought Police did not prosecute the elk
because Elkâs rights stipulate that animal had to be able to understand the
charges against it and the poor beast had addled its brain with alcohol and
could not understand a word of Swedish.

In Boggart Blog over the years I have reported squiffy squirrels, bladdered
badgers, groggy goats, sozzled starlings and many other drunken animals.

Oh, Good. So it must be alright to get drunk then.

Donât know about wasps, but mine seem to be behaving themselves at the
moment. Although I did find three young Queens flying around my passage
light early the other morning. I hastily turned of the light. Much as I
support, âWasps Have Yuman Rites Tooâ, I donât particularly want them
nesting in my passage.

Quite how much double entendre can you getâ¦..?

Am I right in thinking that at certain times of the year wasps get drunk on
fallen and rotting and therefore fermenting apples? Somehow it would be
fitting for their laddish image â âstuff Ibiza boys, letâs get down the
orchard and get off our facesâ. Or whatever wasps have

I didnât know you could get drunk on windfalls. This is worth looking
into.
I have been feeding them to the dog, but then he always has been a
bit vague.

I once had a Grey Hound who ate a Cannabis Plant, although I hasten to add
that I didnât know what it was until he ate it. I had to remove the remains to
stop him getting at again. A stoned Grey Hound can be quite difficult to deal
with.

Can believe it. Had a friend staying in the spare bedroom who used to
delight in getting the Jack Russell stoned out of his tree !

I always thought it was an act: what with the silly hat and all, but
that explains things.

Hello, I see my latest fancy dress costume was rather convincing. What I
wonât tell you was who was the back legsâ¦

Is there something about the saintly Gildas that we need to know, Matt?

Round our way, itâs the starlings tend to do that. Three doors down have an
old, and large, pear tree in the back garden. The aforementioned birdlife
foregathers, partakes, becomes somewhat noisier and some fall out of tree.
Happens every year.

African elephants do the same thing. Rarely end up in trees, though.
Luckilyâ¦

Gildas will be pleased.

When I saw the title on my feed I thought Gildas was writing some cider
appreciation article comparing the pleasures of drinking apple cider with
pear cider which involved the drinking of all the different brands in one
go.

If it was Sweden it was an elk. She was just making sure of her
5-a-day.