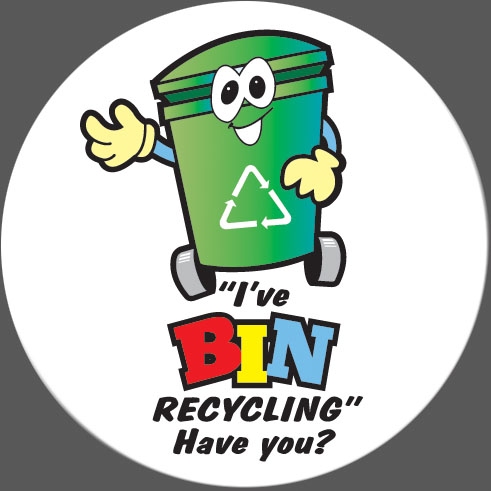 It is strange how many subtle changes can alter an entire national perspective.

The Britain I last lived in about 30 years ago was radically different from the Britain today.

It seems Britain has a new religion that has been added to its cultural diversity.

Where I am now living Binists studiously prepare their offerings once a fortnight and then in a moment of magical mystery wheel out their dedications in the dead of night to be accepted by the great recycling god in the early hours of the new day.

Great precision and dedication goes into preparing the offering with no attention spared to correct presentation.

Plastic to plastic, paper to paper, glass to glass is presented in wee, tiny boxes laid out in front of one’s dwelling.

Offerings from the garden such as precious grass cuttings and leaves tend not to be offered back to the soil but are wheeled out in mighty brown bins to be taken up by the Binist priests shortly after the sun has risen above the horizon.

Sometimes there is a procession of differing orders of Bin priests.

Those who take the plastic, glass and paper seriously and indifferently accept the boxes of offerings, casting the containers back before the dwellings.

However, the great excitement is in the great Bin god priest machines that stalk the streets.

The dawn is broken by the crashing roar of priest machine gods that thunder and tumble in the streets. True magnificence.

Bin priests scurry from dwelling to dwelling, receiving the offerings and presenting them to the great machine god thunderous beasts.

Any unwary traffic at that time swiftly retreats and cowers in alleys and doorways before that presence.

With swift deference the bins are presented by the priests to the great machine gods that lift and quaff them as you or I would a glass of ale.

And then they roar, belching smoke and fire into the crystal day morn and consume one’s petty offering.

The bin priests run from dwelling to dwelling seeming enthralled in greater knowledge, wisdom and ecstacy than such as we, mere lay folk, can hope to know.

And then the great machine god calms, perhaps hiccups, and grandly moves ahead.

Long after the great bin gods have consumed ones’ streets with power and glory, one may hear them strutting the neighbourhood challenging mere mortality.

Sometimes closer, sometimes further, until at last the mighty thunder is heard no more.

We wait in glorious anticipation for our next encounter with humanity’s true grace and wisdom.

This is a cross-post by John B of Outspoken Rabbit.

One is looking at a bad situation that has created by interventionism, that
now requires more intervention to fix it.
If those of a controlling
disposition would back off and allow the free exchange between people to take
place, I am sure that a realistic situation would develop, as Engineer
indicates used to exist.
One does not need top down social engineering to
sort out society’s woes.
If the individual is free from coercion (and
allowed) to achieve what he/she can then a more productive and benevolent
situation would develop all round.
Legislate when people tread on other
people’s toes, not about the way they stand?

Love the description of Binism!

Most recycling has been debunked as uneconomic and ungreen. The only
remaining argument for recycling is shortage of places for landfill.

Why landFILL? Why fill existing holes? Why not make heaps?

Pretty landscape always has bumps in it. Don’t fill holes, make hills. Then
cover with soil. A layer of plastic underneath would simplify draining off any
leachate. One day in the future, these hills can be mined for concentrated raw
materials. Duh.

What a good idea.

I have never recycled anything at the behest of the council. I shall never
do so.

If you have any ‘bin inspectors’ allow me to offer the services of my
toddler son. His nappies tend to discourage even the most ardent bin rummager.

I do however recycle anything the council is not involved with because
there tends to be a point and there is actual value to such goods to some
people on Ebay etc.

The fact that no-one wants old newspaper, glass etc unless they get a
whacking subsidy is a strong clue I would suggest.

I’m for recycling but not for hectoring councils forcing people to recycle.
The councils use the stick approach to recycling rather than the carrot. And
offering discounts on council tax or prizes for following the draconian rules
on recycling is not a carrot approach, it’s still a stick approach. The carrot
approach is more like offering refund deposits on glass bottles.

If private companies were allowed to do refuse collections in competition
with other private companies (rather than the monopoly of one private company
paid by the council) then more recycling would occur (plus lower charges) –
performed by the company rather than the householder. There already exist
machines and systems that can seperate out all different types of products
from a single stream of waste except for food waste – http://cnet.co/dZDsPj

I hate recycling, and you certainly don’t get done around here for putting
things in the wrong bin.
But for the life of me, I cannot do this, my
conscience just won’t allow me to.

PS. Our Recycling Bins get emptied when they are full. Now there’s a novel
idea.

PPS. I found a perfectly good Pyrex Dish, placed carefully in a cardboard
box, alongside the Glass Bin yesterday. I expect you can guess where it is
now.

It all sounds rather orderly and even middle class. But dare i ask how the
‘waste’ of the great unwashed is dealt with?
reading the blogs they are
said to be indifferent to regulation and prone to be violent if
chastised.
I can remember when dust bins contained mostly dust (coal ashes
/ dust) – circa 1945. Paper was far too precious to throw away. You wrapped
your fish and chips in it for example.
And now I am in the antipodes where
we do have wheelybins but not that organised.

The only difference is that recently the county just over the border has
decided to allow glass into the recycling bin and has removed all the
community glass-recycling centres in the vicinity. The county council
responsible for my bin collection still does not allow glass into the
recycling bin, nor does it provide any glass-recycling centres for its
unremembered hamlets on the border with the other county. I’m not going to
drive 15 miles into the county town or 5 miles to the tip to chuck a few
bottles away, so what do I do?

Should I start chucking glass into the ‘household waste’ bin? Should I
leave my bottles and jars in a heap near the household waste bin with a polite
note saying “Dear County Council, I am now unable to recycle these over the
county border so please will you take them away safely?” Or should I start
going out at 3.00am and gently lowering glass jars into the recycling bins of
those who live just over the county border?

Anyhoo, I’ve suddenly remembered an essential car journey I must undertake
because the ‘over the border’ recycling bins are due for collection tomorrow
…..

It’s merely a return to Victorian Values, when almost everything was
collected by someone. Rags and bones by the Rag and Bone man, any food waste
went for feeding pigs, and metals by the Scrapiron man, the sweepings from the
grates (less the cinders – they went back to eke out the coal) by the Dustman
(that’s why it’s called a ‘dustbin’. They consigned practically nothing to
landfill. It was only inthe mid-twentieth century that we all became lazy any
slung the lot, caring not a jot where or when it went.

I’m all in favour of recycing. Waste not, want not.

There’s only one way to exorcise the binful spirits: recycle your bins!

Recycling = When neighbour finds your rubbish in his garden and throws it
back over the fence.

I used to like it more before we ‘recycled’

“The Britain I last lived in about 30 years ago was radically different
from the Britain today.”

Don’t have no truck with the god truck.

One bin goes out once a week, and comes back empty once every two
weeks.

Oh dear, I seem to have drifted off.

Heh. Must persuade Anna to put categories (‘silliness’) on posts.

I’m fascinated where all those extra bins come from to do one out every
week, but only one back every 2 weeks.

26 bins a year created Ex Nihilo in the garden shed

“One bin goes out once a week, and comes back empty once
every two weeks.”

Tnere is only one bin sir… The point was that I am an old reactionary,
and my bin only gets EMPTIED once every two weeks.

Offerings to the bin gods cause division in our house. The lady of the
house lives in fear that the Wise Councillors of the Trash will send their
money collectors if it is discovered that a recyclable item is placed within
the non recyclable offerings’ sack. I have no truck with such views, and
whilst I will make a reasonable effort to put the right offerings in the right
receptacles, I won’t clutter the kitchen, nor venture out in inclement weather
just to appease the great bureaucracy of the Town Hall.

These are fetishes, endowed with the spirit of the new deity, Greenism.
Sometimes it is necessary to make extra offerings to appease the deity, such
as a £20 note at the end of the year, otherwise your ju-ju might be rejected
and woe upon your household.