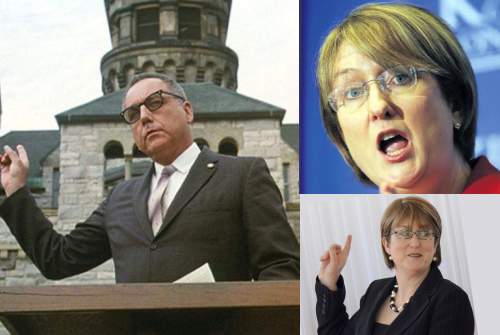 Is it me, or is there more than a passing physical similarity between former MP and Home Secretary Jacqui Smith and the famously evil Warden Norton in “The Shawshank Redemption”, brilliantly played by actor Bob Gunton.

I cannot believe that anyone exists who has not actually watched “The Shawshank Redemption” (which is allegedly the world’s most popular film).

But for those who have not let me just say that Norton is the hypocritical, sinister bible–bashing Warden of the Shawshank Penitentiary (video link).

Under his brutal watch, and using the administrative skills of the imprisoned hero Andy Defresne (Tim Robbins) the prisoners are used as his private labour force capable of undercutting all others and which funnel (if I remember right) “a river of corruption” and dirty money through the prison.

I find this slightly problematical.

If I want the Abbey painted, I get down to my local B&Q and buy some white wash and a roller, or open the Yellow Pages and look under “Painters and Decorators”.

A transaction then ensues, under which I pay someone for their work. I was not aware that there was a local workforce available in return for a undisclosed payment to a local charity.

It seems that the new system has endless possibilities.

Next time I lock myself out, for example, I will not pay a local locksmith an inordinate amount to change the locks. I will pop down to the local Nick and borrow a burglar, who will show me how to get in. In return I shall make a donation to the local RSPCA.

Of course, those familiar with “The Shawshank Redemption” will recall the tapestry which adorned the wall in Warden Norton’s office: it reads “His judgment cometh, and that right soon”.

They will also recall the ultimate ironic meaning of those works, fate which awaits him.

One can but hope….

I’m afraid, dear Gildas, your noble sense of fairness is so 20th
century.

You must wake up to and accept the new 21st century moral-lite world which
is administered by the media/politics/public sector and which you bloggers
whingingly refer to as the “Westminster Bubble”. This “Bubble” is a highly
successful arena for managing the multi-layered infrastructure that a
semi-federated 21st century state needs.

It has trounced your antiquated world of morality and it is here to stay.
It is peopled by many outstanding go-getters and winners like Jacqui, like the
multi-millionaires Cherry and Tony Blair, like the multi-millionaire Camerons and Sheffields, like the millionaire Mandelsons and many more who contribute their 21st century
opinions to society (but expect you to contribute much, much more back in
taxes).

We should really call this vibrant, 21st century world of post-morality the
“Looters’ Club”.

Don’t you realise that it is you, the rest of the non-aligned blogosphere
and private sector taxpayers who are living in your tiny, self-serving and
distorted “Its-not-fair” Bubble, where you indulge in lunatic ideals of
representative democracy, fair pay for a fair day’s work, consistent and
effective justice and so forth.

Jacqui Smiff and her fellow denizens of the “Looters’ Club” are perfectly
entitled to lie, cheat and loot as much as they can. She and her ilk are only
continuing a noble tradition of self-help (greed), non-judgementalism
(immorality) and pride in their work (inflated sense of self-entitlement) that
has been pioneered by socialism, and brought to fruition by the greatest
social engineers since Brunel, Messrs Brown and Blair.

Marvel at their works:
– Ministers, privy councillors and MPs cheating
on expenses to the tune of millions and mostly getting away with it.
–
Nu-labour Prime Minister lying to the public to start an unnecessary war.
–
Tens of thousands of looters allowed to steal or destroy hundreds of millions
of pounds worth of property while police timidly herd them. Most get away with
no punishment (the looters, that is).
– The systemic smearing and intimidation of anyone with a moral conscience who criticises the “Looters’
Club”.
– MPs voting themselves astonishingly good, inflation-busting pay
increases and gold-plated pensions.
– Civil servants getting paid more than
private sector workers AND being almost unsackable AND getting more of those
gold plated pensions AND getting free taxi rides home AND getting jollies like in-work head massages.
– The unemployed, especially the
work-shy, getting full housing, fag money, beer money, satellite TV money and
foreign holidays.
– Largest mass immigration ever experienced.
– Council
chiefs, quangocrats and civil servants getting better pay and pensions than
the Prime Minister.
– Britain dropping downwards in the league table of
well-educated countries, the more so to create a larger, pliant and uninformed
client sector of the State.
– The encouragement of “Good day to bury bad news” attitudes.
– Further corrupton
in the House of Commons with cash for questions.
– Corrupton in the House
of Lords over expenses and cash for peerages.

So there you have it. I think I have effectively demonstrated quite how out
of touch, isolated and outnumbered you lot are.

Just do the only good thing for yourselves and join the “Looters’ Club”, as
most of the Labour, Tory and Lib-Dem politicians already have, and stop your
complaining.

Much as I agree I can’t imagine the police coming to break her door down
and then her threatening with a revolver before turning it on herself.

P.S. to repeat the same words as hundreds of thousands before me, “what a
great film though!”

Gildas, you being a simple man of the cloth, you wouldn’t be aware of this,
but it’s a system that’s been in operation in the backrooms of certain pubs
(obviously not the Raccoon Arms) for many years. Some folks can be very
‘enterprising’.