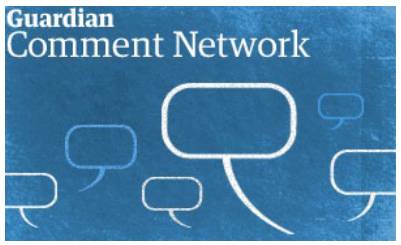 I’ll have a quibble with some of the sites selected, and the eccentricity of some of them, another time (Left Foot Forward – best comment? Really?), but as a project, it looks fine. Content swaps or cross-posts are an excellent way of increasing your coverage and ‘width’, reaching a different audience niche, or even preventing people writing for the Huffington Post or the Commentator, provided that quality does not fall.

When sharing or cross-posting my aspiration is (and yes, I know anyone will make mistakes sometimes) that quality should never come second to width, and when it does you need to be cutting back on the width not the quality.

But that cuts both ways, and authors can just as easily have their reputations damaged by bad editing as can a publication by running poor articles.

In the case of the Guardian, I think they do some fantastic stuff, but their headline writers for non-frontpage articles are, to put it kindly, variable. Particularly, they have a habit of turning nuanced shades of grey into black and white, and tentative suggestions or inferences into reported facts.

And that usually gets blamed on the author.

Which brings me to Amanda Marcotte, who blogs at Pandagon, a feminist controversialist with her own habit of sometimes shooting from the hip in the wrong direction, as here where Reason Magazine (which can be equally provocative) report on a post she deleted about the famous Duke University Alleged Lacrosse Rape case:

Even when the case began to unravel, the witch-hunters remained steadfast. After the most serious charges against the young men were dismissed, the prominent feminist blogger Amanda Marcotte, who briefly served as blog coordinator for John Ewards’ presidential campaign, opined that they were still “not angels” and that their defenders were “rape-loving scum”—because a different lacrosse team member had sent out an email with a nasty joke about killing strippers.

Today Amanda Marcotte has an article about the Tea Party on the Guardian Website, via the Guardian Comment Network, and she is on the receiving end of a mistake.

Marcotte’s original article, about organised attempts to control books used in schools in the USA, suggests a link between the Tea Party and these attempts, under a relatively careful headline:

The Tea Party’s influence felt on the local level, with book bannings

By the time the identical article reaches the Guardian’s website, wax crayon headline writers have transformed this into a definitive culture-war campaign being waged by the Tea Party (badoom, tish):

The Tea Party moves to ban books
As the Tea Party looks more and more like the old religious right, censoring what children can read in school is on the agenda.

As might be expected, the Comment is Free Forum Furies will mutter some version of Amen, Sister and wander off with their prejudices intact. But there’s nothing in the article which supports the claim in the headline (which may or may not be true, but cannot be justified on the article presented). Amanda Marcotte is getting a degree of scepticism in the comments, for example:

I’ve read this article twice now, and can spot no evidence presented that

Are you just making it up?

Sorry, could you explain again how you got from

But that won’t be news to many readers here.

Whether you agree with Marcotte’s thesis or not, and in general I don’t, she’s taking the flak for the Guardian headline-writers who made the mistake.

The lesson I take away is that even basic cross-posting has a price for both parties.

If we cross-post a piece here, the price for having an extra contributor with a different viewpoint may be more time spent editing than it would take to write our own piece, and we have to maintain sufficient lines of communication to keep the relationship strong. We also need to take time to give useful feedback.

On the other foot, the author needs to make sure that we aren’t headlining their article with a silly claim, and ideally to engage in the debate in the comments.

There’s no such thing as a free lunch, even when the food costs nothing.

And the Guardian (and probably the rest of the UK Mainstream Media) needs to get its headline act together.