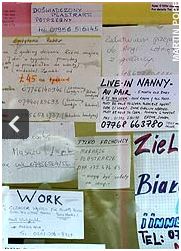 From Kraków to Katowice, the rumours gathered strength. The streets of London were paved with gold; the British didn’t want to work; you could earn a year’s wages in a week – just sweeping the floors, washing up, doing exactly what you were doing now, but for Klondike wages. If you had a trade? Why you could build your own mansion back home in less than a year!

Who could resist? Young Polish men and women, hard workers, fit, disciplined, practised their English and begged, borrowed and saved their precious Zloty. For around £50 Wizzair could have you in London in little more than an hour.

Why stay in Poland, when unemployment was 20 per cent on average and 40 per cent in the 19-25 age group, and when, even if they could find a job, £100 a month was standard and £200 good? Britain was irresistibly tempting, especially as it is the only major EU country that allows free movement of labour from the new East European members.

For many of those young Poles, London was paved with Gold; certainly sufficient of them to keep the Daily Mail in jubilant outrage for a year or more. Columnists hurled headlines around ‘They’re taking all our jobs’, freed to write their copy by the helpful attentions of Agnieska minding their offspring and Aleksy building them a swish new home office in the garden for a fraction of the price Amdega had quoted them.

We hear nothing of those Polish citizens who were not so lucky – bar the occasional sneering article claiming that the ‘cheeky blighters’ had taken over a public toilet as a dormitory to the inconvenience (sic) of London citizens.

Wizzair didn’t stop taking their £50 as the supply of jobs dried up in the UK – no one enquired how the later arrivals would survive.

Now the Polish homeless persons charity, ‘Barka’ has some dozen full time social workers searching beneath the rubbish strewn round skips, under bushes in parks, under railway arches, searching for the homeless and hungry Poles who neither have the money to return home, nor the courage to tell the families from whom they borrowed the air fare, that for them, the streets of London were cold, miserable and dangerous.

They estimate that up to one fifth of the homeless sleeping rough in London – and included in the stark figures put out by UK charities as being in need of assistance and thus more funds – in fact are Eastern European and will therefore receive no assistance beyond the odd soup handout.

Hammersmith became the centre of this squalid tale – the desperate Poles would gather at 4am by a notice board known as the ‘wailing wall’ for news of any possible jobs that might earn them the fare home.

It was a member of Hammersmith council who discovered ‘Barka’s’ web site in Poland and e-mailed them asking for their assistance for their citizens.

So far Barka have managed to find 1,400 of their fellow Poles and repatriate them to their families. Good for them – but surprising that the main stream media have so far managed to totally ignore this ‘other side’ of the myth.

No doubt a similar story is being played out amongst the Estonians, Latvians, and other Eastern Europeans who believed what they read in our media – but I have been unable to track down any other charities actively working to heal the wounds caused by believing what you read in the media…