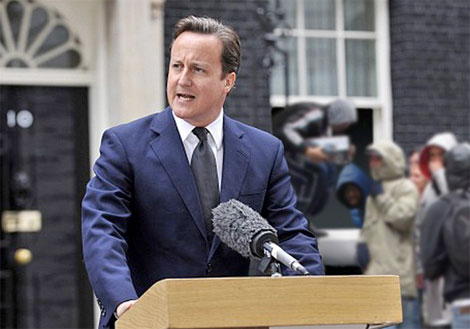 The picture above was found by Charon QC on Twitter; unfortunately I do not know the artist.

The second picture  is by Digi-Artist Surian Soosay, on David Cameron’s return from holiday.

For anyone baffled by the logo, COBRA – in addition to being the Cabinet Office Briefing Room A, where the UK Crisis Committee meets – was also a set of villains from Marvel Comics (and I make no comment on that).

These are my two favourite pieces of quirky ‘riot art’ so far.

They are very supportive though and I hear the male members have a hard
time getting the door open.

Only the front door Saul – there is plenty of activity via the back
door…..

Media go mad if a PM mentions Cobra. It convenes all the time, just without
the PM.
The only real difference the prime Minister attending makes is that
there are better sandwiches.

Strange how the brain works (or possibly mine at least) – I looked at the
first picture three times before I noticed the background action!