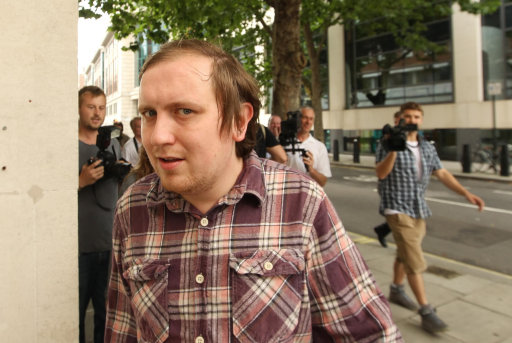 Says the newsman to Simple Pieman,
Allow my wife to show you how;
To land a pretty punch,
– and on the floor you cower.

Simple Pieman went a-flinging,
To advertise his show;
All the coverage he had got,
Was negative, and soâ¦

Simple Pieman went to gaol
For six whole weeks â not long;
Heâll be out in three, with any luck
Which made the newsman whistle.

h/t to The Magistrates Blog for the title.

Engineer, please enlighten me as to the assumptions I have made about your
thoughts or beliefs, I have made none, had no intention of making any and do
not resort to ad homein attacks, in that in my understanding they are a
deliberate attempt to smear; exclaiming in exasperation as what I perceived to
be obtuseness in your replies to my point of view which is gleaned from
several reliable ( as far as reliability can be attributed in Journalism )
articles is not what I would consider an ad homein attack, however if you
think I have then I apologise, however please appreciate that in my world
being told to grow up is a very gentle form of rebuke and one usually said in
good humour.

Engineer, do grow up, really, if your monicker has any semblence to your
intellect then you should be able to perceive the perspective I am commenting
from.

Why straw man it? Because Murdoch senior is a âBorn again Christianâ by his
own admission, this has been witnessed by many sources ( and no I am not going
to try to name them all but try google ) and therefore is ( should be ) a God
Fearing man, which usually means that pleasant and honest attributes follow if
taken in the original and traditional understanding. Rottweiler the other
side? wake up and smell the corruption, all the Media groups are following
political agendas which have very little to do with honerable, honest,
truthfull reporting, the CAGW scam being a prime example. ( look up Jo Novaâs
site for the latest on CO2 emmisions ) do you seriously believe that a truly
free press has ever existed?

It may be that such corruption of the political and thus the judicial
systems of the U.K. mean nothing to you, they do to me and I feel they should
not be swept under the carpet by the powers to be

You make a lot of assumptions about my thoughts and beliefs, few of which
are close to accurate.

Murdoch is neither better nor worse than any of the other present
newspaper propietors of the UK, except perhaps that he is a slightly more
successful businessman in the field of media than the others. You may care
to research Lord Beaverbrook for an example of someone who did seek to
influence politics.

Most newspapers have a slant to their political beliefs, and they are for
the most part open and honest about it. So, if one wants to hear the
opinions of the political left, one might read the Guardian, of the
political right maybe the Telegraph (many of whoâs journalists are decidedly
peeved about the âCAGW scamâ â Christopher Booker and James Delingpole, to
name but two).

Finally, may I respectfully request that you refrain from personal
insult; calling upon other commenters to âgrow upâ is not really the done
thing in the Raccoon Arms, in which the avoidance of the ad-hominem is one
of the attractions. Debate and put your opinion freely â but letâs leave the
more undesirable elements of online discourse to other blogs.

Why straw man it, John Leon?
Engineer did not say: âpleasantâ, âhonestâ,
nor God-fearingâ.
This whole sad saga has been a palace revolution in the
corridors of power and Team A has seen-off Team B. Unfortunately Team A tends
more towards the statist, greater-good of greater government and regulation
camp so I can really only see this as making things a lot worse not
better.
The destruction of the NoTW has been a sad day for liberty, I fear,
not because NoTW was so good, but who is going to rottweiler the other side,
now they are gone?
Team A has a clear run ahead and next in line for
âcleansingâ will probably be that great nasty place, the internet.

Engineer, yes, such a pleasant, honest, God fearing 80 year old man, who is
so out of touch with his companies he has no idea that they spent between $650
Million and $1 Billion in hush money to the FBI, CIA and many other supposed
loyal protectors of the USA. Not. He masterminded all the corruption and has
done so as a matter of business policy right from the beginning of his
âcareerâ and the only British prime minister to rebuff him since M. Thatcher
was John Major, who was pillioried in the press for his facing up to this
poor, gentile, saint of a man and this was part of the cause of the Murdoch
news empire to switch support to T. Blair who allegedly had been bought before
he became PM. This poor 80 year old man has systematically corrupted British
politics for more than 30 years; I think a foam pie in the face is a very
light punishment indeed, especially as it is very doubtful he will be going to
gaol for what he is responsible for, unlike the perpertrator of such a brutal
offence. And people wonder why 42.000 skilled, intelligent people are
emigrating from the U.K. every year.

So Murdoch is now personally responsible for 42,000 people emigrating
each year, is he?

I think Murdochâs âpowerâ has been greatly exaggerated by far too many
people. MPs fear his papers, do they? So they should â better a free and
rampaging press than an unreported government. Besides, who has the power?
Newspapers of all political hue are in decline, broadcasting and the
internet are the real powers in journalism, now; and the BBC controls 70% of
the UKâs broadcasting.

âHe masterminded all the corruptionâ¦â Got any proof of that? Thought
not.

Wonder why the bbc isnât giving The mirrorsâ travails the same exposure as
the NOW. Odd that, isnât it ?

More to the point, why havenât they mentioned the Guardian and e-mail
hacking?

Eating humble pie (oesophagus, tripe, lungs) and an apology for toddlerish
behaviour would have been adequate. The security slouchers should have their
pay docked for letting him in.

Personally I think this is utterly outrageous.

He harmed nothing but the egos of the bigots in parliament for which he
should be cheered!

This country cannot afford to pay it pensioners so why, in Godâs name are
we wasting money on sending someone like this to prison which costs thousands
every week per prisoner? If anything give him a fine or a community order;
personally a medal would be more appropriate.

This just goes to show how pathetic and ridiculous our judicial system has
become. Real criminals, who actually harm people â as in everyday folk â get
off scot free and people like this are locked up! The length is not the issue
for me, just the fact that he is being locked up at all.

He is a criminal, though. He committed assault. Not, fortunately, a very
serious assault, but it was perpetrated against an 80-year old man. He also,
I gather, didnât help his case much by making slightly sardonic comments in
court.

Comparison might be made with the Fathers for Justice campaigners who
threw a flour-bag at Blair in the HoC some years ago (fined, I think), and
with the pro-hunt campaigners who invaded the chamber of the HoC (fined and
given a suspended prison sentence). The latter assaulted nobody, the former
might consider themselves fortunate.

In fairness to him, at least he has the decency to look like a complete
pillock.