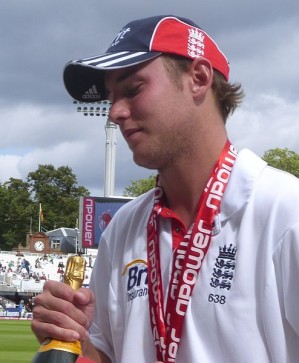 In the Trent Bridge Test Match, Stuart Broad took (*) a hat-trick on the way to bowling figures of 5 wickets for zero runs.

(*) I was clean bowled by a scorer in the comments.

Many people blinked and missed the hat-trick, and on Test Match Special they received a number of emails with (alleged?) excuses as to why listeners had missed the crucial moment.

Here is the video clip:

That nick of the bat in the 2nd wicket of the three, which was given out Leg Before Wicket, should perhaps have been more controversial than was the case. But for some reason everyone seems to have ignored it.

And I have posted a snippet of the TMS âexcusesâ below.

One claimed that the caller had issued a celebratory âYES !!â just after the Priest at a wedding had said the crucial words:

If any of you know cause or just impediment why these persons should not be joined together in Holy Matrimony, you are to declare it.

As somebody who has watched cricket, and also been to a themed wedding reception at a cricket club, I can quite believe it.

This segment also contains what may be the only footage ever recorded of Geoffrey Boycott apologising to anyone for any reason whatsoever, and only then under the tender ministrations of Mrs Geoffrey Boycott.

The excuses start about 1 minute in, after the apology.

Look at the confidence of the appeal that dismissed Harbhajan. Iâm sure
there must be a correlation between the assurance of the fielding side and the
willingness of the umpire to raise a finger; a sort of internalised
argumentum ad populum.

The mindgames that sportsmen play on the authorities are quite amusing,
actually. Iâd often wondered, for example, why footballers argue with the
referee when a decision goes against them. Itâs not as if heâs going to change
his mind. Well, no, but if they can convince him that heâs erred he might feel
obliged to compensate in the next situation.

Should I be coming to Anna for my sports arguments also? Sweet.

Scored? Scored? This isnât football Matt. In cricket one takes a
hat-trick.

As someone who spends her Sundayâs during the summer scoring for a club
side there is no way I could let that one slip.

I didnât miss it â I heard it on Test Match Special, and by golly I enjoyed
it (as did Henry Blofeld!) much to the surprise of next doorâs cat, which was
taking a nap in my kitchen at the time (long storyâ¦.).

Some of the reasons for missing it were priceless, though, as was the
Boycott apology. (Somewhere in the TMS archives, there exists a recording of
G. Boycott saying, âI was wrongâ. That must be a one-off, anâ all!)

Thanks for that post, Matt. It was a superb match, and the TMS team were in
fine fettle. Broadcasting at itâs finestâ¦

TMS was (is) exquisite. Blofeld seems to spend his working life in a
state of permanent bliss. Boycottâs âapologyâ was wonderful, as was the way
Jonathan Agnew milked him for it.

5 â 0 in a spell of 16 balls, 6 â 46 for the whole innings. Both
extraordinary performances, not to mention his batting. England in these two
tests, even against a depleted and demoralised India, are starting to resemble
the Aussies in their pomp under Border, the Waughs, and Pontingâs early days.