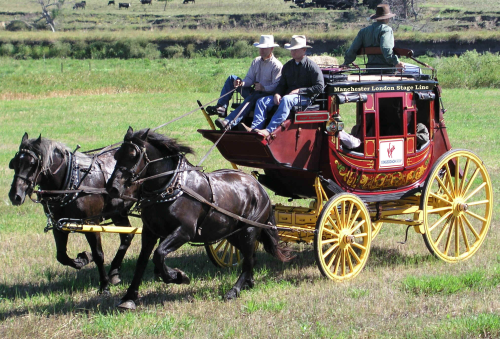 And so having received the summons upon the suit against my master Lord Fixit last week, I was this Sunday bid to leave the rural Shires and make my way back to London to reply to the bill of pliant levied against him. That this writ that has been brought against him was indeed most vexatious in my eyes, and would cost many hundred of guineas if be not rebutted, and so I was most alarmed on his behalf. Therefore I did rise early of the Sunday and make notes upon the case, forsaking all breakfast apart from a loin of pork and a cask of port wine, which Doctor Quack hath assured me will calm my nerves and relieve the gout and constipation. It does, I fear, cause me the wind, but I dwell upon this not.

And thus arraigned that afternoon in my finest gear of sack cloth and gaiters I did attend at the coaching station run by Mr Branson and commence my journey to the metropolis which is London in one of his âVirginâ coaches. Forsooth, I must sadly report that the carriages laid on by Mr Branson were indeed most inconvenient and ill appointed, and there were many peasants crowded therein. The carriages were too small and most hot and full of very many members of a family called Chav, who were noisy fellows, and more I did take note of the fact that the commodes placed therein for the benefit of the common people did emit a most singular stench which reminded me in no small measure of silage time.

Therefore to escape these vexations I did expend an extra five shillings and sixpence to ride in the separate first class portion of the coach set aside for Lords and Ladies and other gentlefolk, and so indeed that I could peruse the correspondence to and from my Lord Fixit with Mr Grabber, who did seek complain most vigorously about the harm done to him in his bill against my Lord, though I could not agree.

I should record that even though I paid my five shillings and sixpence yet still there was no hot water from which to make coffee, as is now the fashion, and I was most distressed. Nor was I allowed to partake of my pipe and tobacco, and I did became most irritable of demeanour and ill of humour.

However, although the horses were lame and our carriage was late, yet still I did arrive in London that Sunday evening, and then went on by another and more favourable black carriage to my lodgings by St Paulâs just off Cheapside, at the Last Minute Inn run by Mistress Dot Com. The Last Minute Inn was indeed most comfortably and spaciously appointed with much smoked glass such as we in the Shires do not oft see, and there were many servants clad in the latest fashionable colour of breeches, which is black, and indeed many of these seemed to be from the farthest reaches of the Baltic shore.

Here I must make remark that to my amazement even on a Sunday Eve the City around was filled with a throng citizens of all four corners of the world, who besported themselves in the evening sunshine, and I was amazed to see that a string quartet did play by the river, pleasing the crowd with the latest in the Baroque beats. Therefore I took a stroll along the concourse by the banks of the Thames and wondered with amazement at the latest building being erected by that upstart Mr Wren the architect, which is known as âThe Shardâ, and which I did mistake for a giant cucumber made of glass stuck in the ground at a wonky angle. It was thus a fitting accompaniment to his previous effort, âThe Gherkinâ, as it seemed to me. The good Lord preserve us should he ever get to build a Cathedral!

For my refreshment I did partake of a glass of port wine at an inn called the Smug Fat Git, and fittingly enough there I did aspy a Member of the Commons, Mr Tom Watson, who was imbibing with a companion, but spoke not to him, and wisely so, for if I had raised the matter of his expenses with him I fear he may have run me though with his sword.

But I did not tarry, the hour becoming late and I being in need of my repast. Therefore instead I did fly to my back lodgings at the Last Minute Inn intent upon the same. But to my dismay I did find that the prices in London were most alarming and amazing, and a simple supper of roast boar, swan, sweetmeats and a cask of fortified wine would cost me the veritable price of my stipend as Provost of Parish of Adderdale for a year, and a pretty penny more besides! Therefore I did retire to my chambers and order their most humble dish, the new fangled âpizzaâ which along with incest is fashionable in Umbria and Tuscany, and a humble glass of hock, which did indeed taste likes gnatsâ piss. And even this did cause me to expend another five guineas and seven shilling and twopence, for which I could have bought the whole parish Christmas dinner back in the Shires. However I was not utterly dismayed, for I had most presciently and with great good foresight brought with me and upon my own person a bottle of vintage port which I had purchased from Mr Thresher the vintner before I had embarked upon my journey in Mr Bransonâs carriage.

And so to bed.

Thereupon in the Monday morn I did rise very early and embarked upon my toilet and ablutions, but even this matter was not without much incident and no small danger to your humble servant! For although the rooms of the Last Minute Inn were most comfortably appointed with the latest of fittings, one of these was the new fangled âshowerâ invention which purports to improve upon a pitcher of icy water. Yet I confess that I did find myself much vexed of this âshowerâ which had very many buttons and levers and no explanations at all, such that when I tried to use it water squirted not down from the roof but out from the most unhelpful angles, thus taking me by surprise, and in such manner that soon the bathroom took on the appearance of the water meadows of my Lord Fixitâs pastures after a spring flood, and everything was wet save my own person and hair, and I did blaspheme and curse most profoundly.

And so to the Justices in the Strand by black carriage, and once again did I marvel at inhabitants of this City of London, who run rather than walk, as we in the Shires do, and seem to be most interested in the business of going somewhere very fast, and in all directions!

At the Palace of the Justices I did meet the agent of my Lordâs factor who brought me fresh instructions and more letters. This was a most felicitous event for the appointed agent was Nell, and she was a comely and intelligent girl. However, before long I then encountered Mr George who had been engaged to press the bill against my Lord Fixit, and he then did so before the three Justices, all of whom looked like Dobby the House Elf in a book which has not been written yet, and is thus a most strange and mysterious observation.

Mr George spoke much force and spirit. But to my delight the Justices took against him and accepted my demurrer on the bill, which was a case stated upon the plea. And so my Lord prevailed and I confess I did rejoice when the case against him was dismissed and Mr George was sent to Newgate, there to await his extradition to the colonies.

Thereupon I did retire at one of the clock with Nell to the nearest inn, and we did refresh ourselves with plain and wholesome food and indeed each a flagon of ale. I shame myself in recounting that Nell did seem to me most comely, with flashing eyes and a slightly up for it smile, and I did wonder whether to press my own suit in this matter further of that very afternoon, but her carriage did await, and I so did not. Yet still Nell did give me a carrier pigeon, so I could call her later.

And so back to Mr Bransonâs coaching station at Euston and the long journey home, which was most mundane, and also which vexed me when we were diverted because of a highway robbery near Rugby.

And there to write upon this matter in my diary, and to bed.

And now sir, will you get ye to Chatham, as your lord of the Admiralty is
much perplexed. His fleet is diminished and all excuses for meetings over a
flank of beef and a flagon of the finest victuals is becoming vexacious to the
chancellor.

Not up to your standard, Iâm afraid.

I can imagine not everyone will âgetâ this, but I had fun writing it!

And I had tremendous fun reading it. Thank you for brightening a gloomy
Monday.

Forsooth, Sir! Methinks thou hast occasionâd a Slippage of the Days;
âtis Tuesday according to mine Almanack.

Indeed! One tends to lose track of time at 1,500 years oldâ¦

To upgrade from peasant class, a Sunday special. Back in the day when 27p
could buy you somethingâ¦

Wherefore my good Gildas, I should remind you that I have been most
painfully slashed in the Belly by the demon barber and am held together with
hemp and string â your mirthful raccoontage is less than helpful!