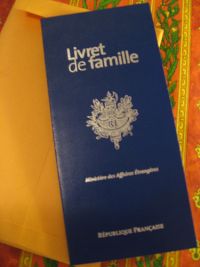 Iâve got the hang of the local accent now; I rattle confidently through the questions with them as they laboriously write out the answers in triplicate. Nom, prÃ©nom flies out in the correct back to front order; I deliver my telephone number in batches of two digits at a time, no longer do they turn into ducks barking âquoi, quoi, quoiâ at me.

Only this time we are computerised, this time it is not just the look of horrified bewilderment, the search for comforting colleagues that can deal with this unbelievable situation.

This time itâs the blue screen of death, M. Le Chef sent for, and the bureau grinds to a halt.

You might as well apply for a mortgage in the UK and tell them you are unemployed and of no fixed abode as tell a French medical computer that you do not have a âlivret de familleâ â it simply wonât progress to the next page of questions without the number of your all important record of birth commune, various marriages, how many children you have.

The computer is tempted with the response âAnglaiseâ. No dice. It is probably surreptitiously tempted with âbloody stupid foreignerâ for all I know. Itâs not playing.

I produce the photocopies of birth certificates, marriage certificates, utility bill etc, which I habitually have about my person â I have been through this scenario many times before, as you can tell. Even my all important âcarte de rendezvousâ showing that I will have surgery on Thursday â this blood test is important.

The computer is unmoved. I might have Mad Cow disease! (Pipe down in the Snug, please, Iâm speaking)

M. Le Chef has an idea; he once had this problem a long time ago. Could he please have my âCarte de Groupe Sanguinâ. âNon, Monsieur, je nâai pasââ¦.. The blue screen of death apparently spreads from the computer across the face of all present. âQuoi? Quoi? Quoi? Three ducks in a row. Pole-axed, dumbfounded, agape, aghast, thunderstruck!

M Le Docteur in charge of all vampire duties is extracted from his surgery. He speaks English. He explains the documents I am carrying from the anaesthetist. Here, see? The anaesthetist wants to order 4 litres of blood in preparation, it is not just a matter of checking me for that well known English ailment of Mad Cow disease, but it is the responsibility of the laboratory to check my documents and tell him what blood group to order. There! Look! He requests the details by fax three days before he will let the surgeon loose on me â it is his responsibilityâ¦

I should have a card that tells them that exhaustive checks have been made that I am who I say I am, born in the commune that can vouch for me, to the parents that were known by the Mairie, he cannot believe that I go through life â did I travel there by car? â and do not have on my person a card telling them my fully documented blood groupâ¦oh damned consternation. These ignorant foreigners!

There is nothing else for it, I must be treated as though I had just been born in the glorious French Republic â they would create a Carte de Groupe Sanguin for me, the computer could be mollified.

This is such a serious matter that two sets of papers must be prepared. Hand written since the computer still isnât playing ball.

I am marched into the first Doctor. He recognises me (as well he might, I am still smarting from our last encounter). He knows I must be on their computer â it seems in handwriting the documents, they have spelt my first name in the French fashion, and thus it doesnât match up with my dossier. He rushes out and everything is painfully rewritten. Now he can ask my name once more, and I can produce my passport to verify my identity, and my date of birth, and, and, and â finally he extracts an inch of blood and sends me back to the waiting room.

This personal responsibility business takes some getting used to.

You see, it is my body, my responsibility to ensure that I get the right blood, that I am free of dastardly English diseases, and the Carte de Groupe Sanguine will prove all that. So they do it twice over, with two different Doctors, (to make sure I havenât bribed the first one?)â¦..I could have chosen the laboratory that I trusted with this all important task too. There are three or four in every main town.

I was amused in hospital when it was decided to send me off for a second opinion by ambulance to be asked âwhich ambulance?â When I answered with a shrug â âthey all look the same to meâ, the Doctor returned with a handful of brochures from the different ambulance companiesâ¦..I picked the one with the square headlights of course, how else could I make a decision?

But it is my body they are conveying, perhaps I have heard rumours that one company drives too fast, or maybe my cousin works for another company? Choices, choices, unheard of with the NHS.

I had thought that my appointment with the anaesthetist, quite distinct from my appointment with the surgeon, was to allow him to check that I was fit enough for him to risk his reputation on â not at all, now I learn that it was for me to also decide whether his eyes were too close together, did I trust him? â I could have turned him down and requested another!

Now I understand why as I waited to be called by him, earlier names called involved entire families standing up and marching into his room â a big decision, grandma, mama, papa, and the maiden aunt all wanted to size him up and help decide whether they were prepared to entrust their precious relative to him!

Choices, decisions to be made, personal responsibility, scary stuff. It works though.

Itâs all very foreign to someone brought up with the NHS.

âYou might as well apply for a mortgage in the UK and tell them you are
unemployed and of no fixed abode â
Youâd get one!

I am seldom gobsmacked, Anna, but your reporting on this difficult matter
is little short of inspirational. God bless youâ¦

Best of luck Anna, I too experienced exactly the same when I was resident
in France.

Unfortunately after 11 surgical interventions, 8 general anaesthetics and 3
epidurals our life in tatters both financially and healthwise we have had to
return to the UK to have things repaired. Some is repairable but not all.

The University College Hospital however are doing a great job in putting be
back together and operated on me on 30 June and the local District Nurse is
keeping an eye on me. At least I will be complete again.

Please for all its faults the NHS do a brilliant job, donât knock them.

Once again Anna, best of luck, you are such an inspiration to us

Still the best by a long chalk.

So, no translators supplied free of charge, no leaflets explaining it in 23
different languages? They donât do it here in Spain either!

Mind you, many Doctors here can speak English. It seems to be the universal
languages for foreigners.

No wonder the NHS is in such a messy disorganisation!

The thoroughness actually sounds encouraging compared to the NHS. The last
time I had a blood test in A&E (nothing serious, a burst capillary causing
bad nose bleeds) the quack dropped the first sample all over the floor so it
had to be repeated. A certificate for the doc of âPas-cackhandedness et
respect pour le pauvre patient qui merdes himself at the thought of needlesâ
would have been good. EU please legislate, using my exact wording.

Such attention to detail and choice must be very reassuring, I wish you
well and a speedy recovery.

I was in the garden Sunday and saw a mother Raccoon and four young-uns cute
as buttons, they caused an uproar in the local crow population as they often
steal crows eggs from the nest, our dogs were none too happy either.

If their computers suffer the blue screen of death, make sure they print
out all your important records before starting, just in case it happens during
a critical period.